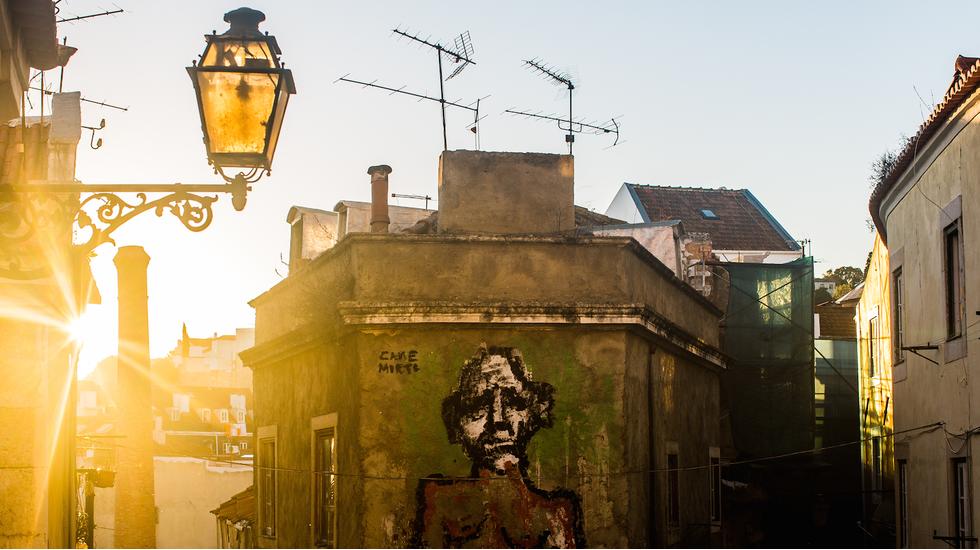 I I grab the elbow of my friend suddenly and point up to where a geometry of golden light cuts between the narrow street and across the tops of the buildings. It's late in the afternoon, and from the hushed urgency of my voice you'd think I was pointing to a shy forest animal that might flee at any moment. Lisbon's light is like that: shape-shifting, taking on different forms at different times of day. You have to catch it when you can.

A city's attractions are usually tangible things. Buildings. Monuments. Shops and art galleries and restaurants and gardens. Not light. The same sun shines down upon every city, and yet it belongs to no one. So how can Lisbon claim its light is special?

The exhibition 'A Luz de Lisboa' that ran last winter (The Light of Lisbon) both acknowledged and explained Lisbon's uniqueness of light. Throughout the winter the exhibit filled the Museu de Lisboa, exploring, in a series of appropriately sun-soaked rooms, both the light itself and the artworks it inspires. An inscription over the entrance to the first room quotes Fernando Assis Pacheco: "If I were God, I would stop the sun over Lisbon."

If 'A Luz de Lisboa' is to be believed, there's science behind Lisbon's claim of being basked in a unique and enchanting light. It doesn't stem from just one factor but an alignment of many.

There's the topography. The city can be imagined as a kind of bowl shape that collects the light reflected by the river and surrounding hills and concentrates it in the city's centre.

There's the colours of the buildings. Lisbon favours hues that attract and reflect the light. Buildings are painted with the warmth of sandy yellow, rich ochre and blushing pink. Materials like white limestone and Portuguese lioz limestone are effective in reflecting and scattering the light, intensifying its glow.

Then there's the city's quantity of sunshine hours. A plaque at the exhibition lists annual averages for five European cities: Lisbon crowns the top of the list with 2,786 hours of sun.

If you happen to watch the strata of ruby and citrus-coloured sky at sunset perhaps skip the part about light wavelengths and dispersal of colour through the atmosphere. It's deeply interesting to know the truth about the sunset, but not nearly as romantic.

A single line from the Portuguese poet and essayist Ruy Belo repeated over the speakers in one of the exhibition rooms: "Que importa que morramos se a tarde é de sol?"

"What does it matter if we die," Belo asked, "if the afternoon is sunny?"

Painters and poets and photographers and filmmakers have long been inspired by the light of Lisbon. Before you know it you're one of them, drawn almost against your will to walk or sometimes even to run, chasing the fleeing, untouchable creature that is the light of Lisbon; trying ceaselessly to grab something that cannot be touched, something that maintains its distance slightly above the rooftops and climbs, just beyond reach, over the horizon. But that's what makes the sunlight such an "immaterial icon of the city": it cannot be caught. You can only chase it until it's swallowed by the darkness, and know that it will return again tomorrow.