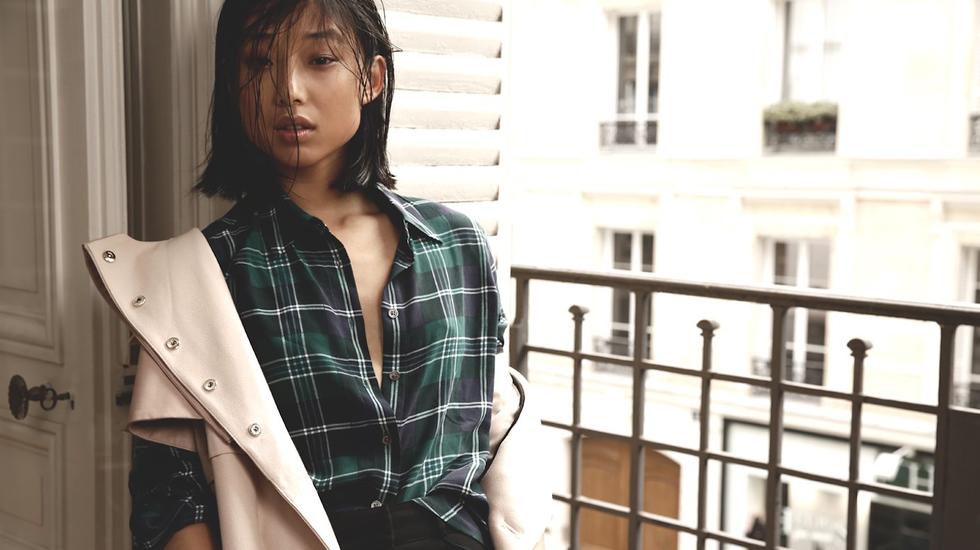 It's It's meant as a source of #motivation when it appears on your Twitter feed. It's also technically true, which is what makes it so unsettling. "You have as many hours in the day as Margaret Zhang." It's only 6.15AM and Margaret is already in the middle of a hair and make-up appointment when she answers her phone from Sydney.

A photographer, writer, stylist, television presenter and director of travel and style blog Shine By Three, Margaret Zhang is one of the most influential voices in Australian fashion. Since starting her blog at the age of 16 she has contributed to Marie Claire and Harper's Bazaar Australia, all while developing a personal style that lies somewhere between a well-tailored man and a ballerina. This year she was announced as one of Clinique's ambassadors for the company's #FaceFoward campaign, alongside fellow blogger Tavi Gevinson and SUITCASE Magazine's very own Serena Guen.

Margaret has achieved in 22 years what many of her peers might hope to achieve in a lifetime. And her accolades are made all the more impressive by the fact that she has been studying for a Bachelor's degree in law and commerce alongside them. The combination of fashion and law might at first seem contradictory, but her academic training has complimented her creative endeavours, making her a blogger with serious business credentials.

"Law keeps me grounded," says Margaret breezily, as if her double-life is the norm. She goes on to explain that her professors at the University of Sydney would never accept fashion week as an excuse for a late assignment. "The problem-solving skills have really helped with the logistical side of my business - learning to remain practical about everything and not getting swept up in the fashion storm."

If you have the real skills to back up what you’re doing, then people can ‘fake it ‘til they make it’, but you’ll always be better of in the long term

Margaret studied business in combination with law for the first three years of her degree and as a result developed commercial awareness skills that have made her an astute entrepreneur. When the Chinese-Australian blogger became aware of her huge following in China - "apparently my fan base there think I'm really badass! They're used to super-pretty Chinese celebrities with alabaster-white skin" - she re-coded her website to include a translation into Mandarin, which she speaks and writes fluently. She has brokered partnerships with brands including Nike, Swarovski and Louis Vuitton, employing her corporate know-how to protect herself from exploitation: "I'm so thankful that I know how to read a contract - I know my usage rights, what it means when someone breaches them and what the legal ramifications are."

When it comes to discussing the Australian fashion industry, Margaret's observations are practical and carefully thought through. She is reluctant to group designers into vague categories of national style or form: "I do find it quite funny when people say, 'Australian designers are so Australian' and 'Australian aesthetics are so interesting'. If you look at the designers, their works are extremely different. I don't think there's anything inherently Australian about Australian designers that makes them good; they're just good designers."

Margaret cites Dion Lee, Kym Ellery, Zimmermann, Christopher Esber and Michael Cheika as some of the most exciting designers at the moment, going on to explain that Australian consumers are loyal to home-grown brands. "I think they like to see things that are made in Australia and they trust that more than a chain store." Zara, Topshop, Uniqlo and H&M have all expanded to Australia in the past four years but Margaret says their presence, despite initial concern, has not compromised the popularity of independent brands and boutiques: "I don't think it's had a huge impact. It's just meant that Australian designers have had to keep up - they've all had to build online stores if they hadn't already and they've all had to stay competitive and streamline their strategy to make sure they're reaching the consumer as much as they can."

Australian designers are now beginning to engage consumers at an international level as well. Zimmermann showcased its fifth consecutive season at New York Fashion Week this year, while Dion Lee exhibited for the second year running. Kym Ellery, meanwhile, became the third Australian in history to feature on the official Paris Fashion Week schedule. "It's taken some time for them - and will take some time for a lot of them - to figure out how to make the product commercially viable internationally," says Margaret, adding: "There are so many designers that I would say are so much more interesting than a lot of the commercial stuff you see in New York. I just think it'll take a bit of time to get that financial support and business mentorship for them to be able to expand."

The Australian fashion industry is taking its time to progress outwards, as talented designers start to engage international consumers in a commercially viable manner. "My mum has always said that 'real skills prevail,'" says Margaret, explaining: "If you have the real skills to back up what you're doing, then people can 'fake it 'til they make it', but you'll always be better of in the long term."

Margaret herself is the embodiment of her mother's belief. She might have the hundreds of thousands of Instagram followers typical of any fashion blogger worth their salt, but she also recently wrote an essay on how social media is affecting the impartiality of juries in courts of law. Her talent for blurring the boundaries between an academic and creative career, while underpinning the superficial aspects of fashion with detailed knowledge of commerce as well as her ability to provide intelligent commentary are the skills that make her shine by three.