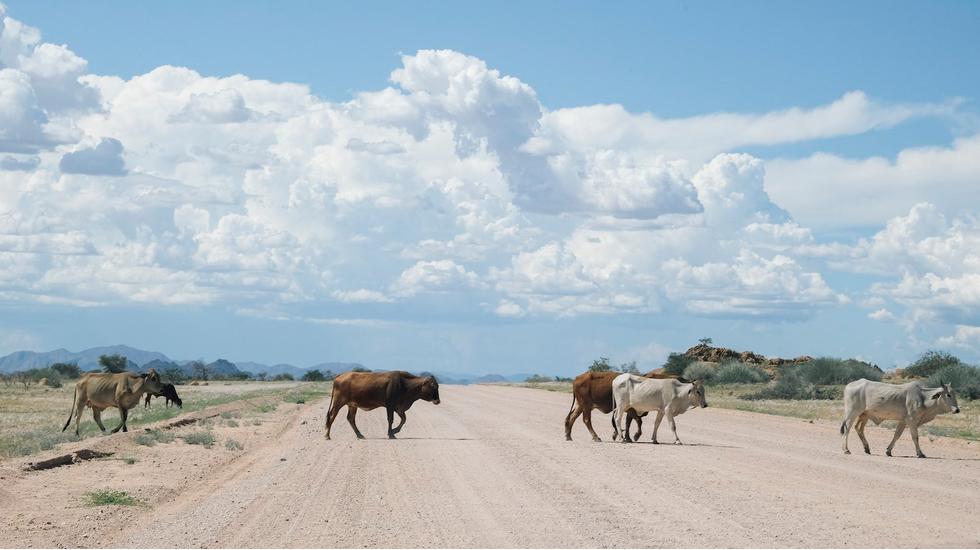 With With a name literally translating as "vast place", it's unsurprising that Namibia is one of the world's least crowded destinations with less than three people per square kilometre. With you in the driver's seat, this itinerary takes you from the country's capital, through rolling sand dunes, desert realms and gaping canyons. Long stretches of open road ensures a trip as diverse as it is rewarding. Choose your own pace, stop-offs and timings, looping south through wilderness, coasting along glistening shorelines and off-road driving through expansive national parks.

Fly directly into Windhoek for a couple of days in Namibia's capital. Check in at The Olive Exclusive, a tranquil boutique hotel just outside of the city centre, where you'll enjoy a king-size bed, freestanding bathtub and a private viewing deck and plunge pool. Relax with a massage at a nearby spa before collecting your car for the next two weeks. The next day, tour the city, stopping by the Namibia Craft Centre, the Independence Memorial Museum and the Katutura township to learn about the history and local culture of Windhoek.

Post tour, depart for your first road trip of the holiday. Drive south west through sprawling wilderness into the depths of the Namib Desert to Sossusvlei Desert Lodge, where you'll cool off in the pool as the sun sets behind the dunes. Come morning, drive out to Sesriem Canyon to hike up ridges and clamber across cliffs before testing your mettle in an afternoon spent speeding across the sands on an off-road buggy or sandboard. Reward your efforts with a sundowner on the dunes, sipping an ice-cold beer while soaking up the views. On your last day in Sossusvlei, wake before sunrise for a hot-air balloon ride across the barren landscape, gliding over the desert as the sands change colour in the morning light.

Clamber into your car to embark on a five-hour drive north to Swakopmund. En route, stop at the sleepy town of Solitaire, located at the edge of the Namib-Naukluft National Park, and do keep your eyes peeled for abandoned cars overgrown with spiky cacti - the wrecks were left here by the first settlers in the 40s. On arrival in Swakopmund, dine out - the city is renowned for its food. Try The Tug for locally sourced cuisine (we recommend the oysters, harvested in the waters of nearby Walvis Bay).

Retire to hotel Pelican Point, a colonial lighthouse originally built to watch over ships on the notorious Skeleton Coast. Now a boutique hotel, it has rooms with sweeping views of sand dunes running down to the ocean - dolphins, seals and whales can often be spotted from windows. The next morning, wake for a tour of the rugged Sandwich Harbour, part of the Namib-Naukluft National Park. Nature lover? Try kayaking with the seal colonies of Walvis Bay or unleash your inner Attenborough as you explore the species living in the desert.

Drive through arid landscapes and deep valleys to arrive at your next destination. In the shadow of the Brandberg Mountain (the largest in the country), Sorris Sorris Lodge is the best place for epic views and ultimate isolation. Viewing platforms and decks are perfect for stargazing, while the idyllic pool is a must for a cooling paddle after a day spent exploring.

Spend the rest of your time going on nature walks and drives through the landscape - elephants, giraffes, oryx and lions that live here have adapted for desert life, and while spotting them is harder than at other national parks, these special animals are worth the wait. Delve further into the rocky ridges to find ancient caves filled with art made by the San Bushmen.

Beyond the mountains and across the arid deserts, Etosha National Park provides a more typical safari experience. Arrive at Little Ongava to find spacious rooms with private plunge pools, perfect for a refreshing dip after a five-hour drive. Time here should be divided up between guided sunrise walks for picnics from vantage points throughout the park and game drives, on which guides will take you to crowded waterholes brimming with thirsty animals and incredible wildlife.

We've teamed up with Nemo Travel to help make experiences bookable. They're a luxury travel company which brings together insider advice with innovative technology. Catering to the modern traveller, its unique itinerary builder gives you the power to design a bespoke trip at a price that suits you. We're thrilled to be partnering with them to bring you the best in experiential travel at the click of a button.