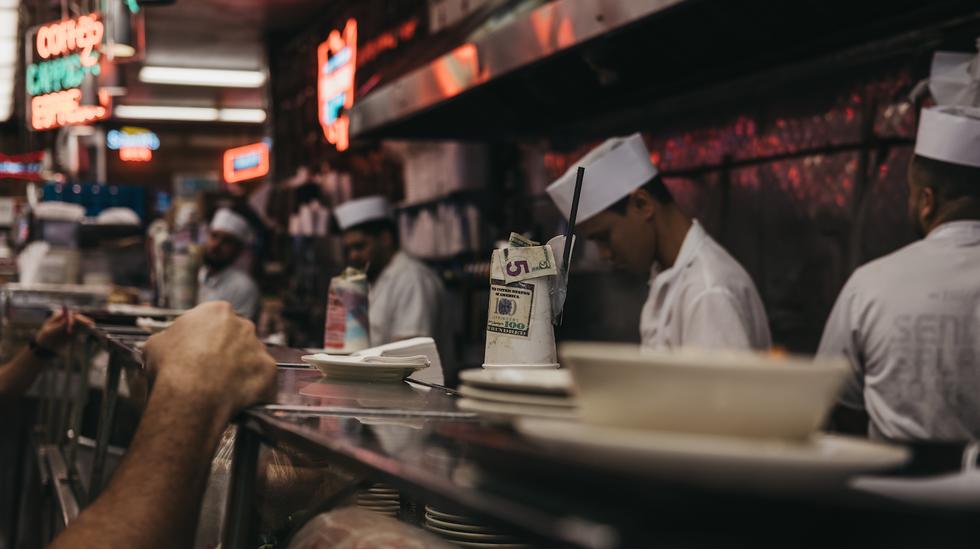 Few Few things are as synonymous with New York as a classic diner - grilled cheese, chocolate shake and all. Whether you're looking for some late-night nosh after bar-hopping on the Lower East Side or want the fluffiest pancakes in Manhattan, our list will help you snag the city's best lox-topped bagels while avoiding the queues.

Empire Diner’s kitsch decor, from its chrome accents to its retro timers, make it stand out from most of the city’s other greasy spoons. Neatly tucked into a small cylindrical space, the restaurant’s unique detailing is enchanting. For a homely start to your meal, order a round of apricot ginger scones with creme fraiche and buttermilk biscuits alongside honey butter and strawberry jam for the table. From there, any of the breakfast specials that are offered until 4PM – such as the steel-cut oatmeal with brown sugar or the focaccia breakfast sandwich with aged cheddar – will make you feel as though you’ve been transported to your grandmother’s kitchen.

Perhaps the only vegan diner in all of NYC, Champ’s is the veggie answer to typical all-American comfort food. With a Texan twist, the menu focuses on Southern-inspired food, dishing out meat-free chik’n and waffles, biscuits and “soysage” gravy and vegan taco bowls. Since everything on the menu is a “healthy” take on the original, plump for one of their dairy-free milkshakes too – the s’mores and mint-chip Girl Scout cookie flavours are calling our name.

An all-time favourite in the Ukrainian Village, Veselka is the stuff of New York City legend. Considered by many as the only place that makes it worth sitting down for a proper meal at 4AM (rather than snagging a dollar slice) this 24-hour eatery is the place to be after a night out on the town. Known for its Eastern-European fare, Veselka serves the city's best pierogis, blintzes and latkes with apple sauce. It also happens to be Alexander Wang's go-to for after-hours eats, making it all the more appealing.

A classic pancake house and coffee shop set in SoHo, Landmark is one of our top choices for a sweet pick-me-up to pre-game a big day of shopping in the neighbourhood. Order the thick-cut French toast drizzled in Vermont maple syrup with endless cups of coffee or a stack of blueberry pancakes before channelling your sugar high into tracking down the area’s best vintage shops.

A New York establishment, Katz’s has been a downtown gem since 1888. The restaurant’s massive dining space means it can cater to the stream of eager visitors constantly pouring through its doors; Katz’s extensive menu has proven to please the masses for over a century. A mecca for Jewish-deli classics, Katz’s serves up what is arguably the best reuben sandwich in town. To avoid getting stuck with the crowds of tourists checking out this classic, stop by Katz’s for an early-afternoon lunch or late-night snack rather than for Sunday brunch.

Barney Greengrass has every Upper West Side family singing its praises for being a neighbourhood highlight, and there are few better advertisements than that. A classic New York nosh spot, Barney’s is renowned for its smoked fish. Stick to the basics and you’re guaranteed to be served the best Nova Scotia lox bagel you’ve ever tried. We also feel it’s necessary to mention that Anthony Bourdain once referred to Barney’s as serving “the best breakfast in the universe”.

What Clinton Street has in Instagrammable charm (somewhat unusual for your typical diner), it matches in scrumptious, filling food. Slightly more elaborate than your average bacon and eggs breakfast menu, the selection here includes everything from caramelised-banana French toast to pancakes oozing chunky chocolate sauce. It’s one of our favourite brunch locations on the Lower East Side, but we’re not the only ones — a solid game plan is to arrive early or visit for a mid-week brekkie.