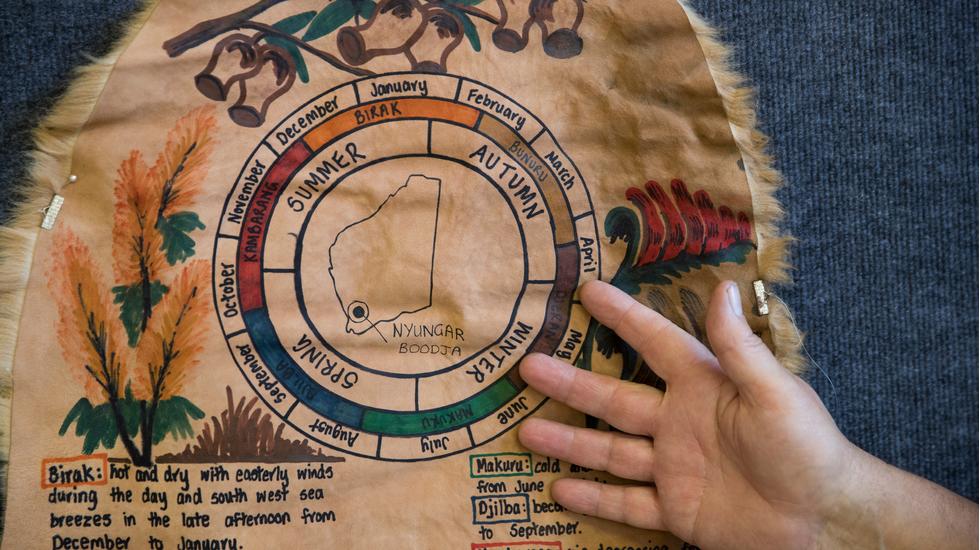 This article appears in Volume 33: Collective.

Connected to the city by the Swan River, which snakes between its suburbs and the Walyunga National Park, the area is the state's oldest wine-growing region. Yet long before the vines were planted, the Noongar Aboriginal people have been custodians of this land.

Aboriginal Australians are the longest-surviving continuous culture in the world. The Noongar people have lived in the Swan Valley for over 40,000 years - and they're keen to share their ancient traditions, stories and practices with the growing number of travellers seeking a deeper understanding of Australia's historical roots.

A descendant of the local Wardandi Bibbulmun people - part of the Noongar community - and an expert on native foods, Dale Tilbrook is intent on preserving and future-proofing Aboriginal heritage. In the 1990s, she and her brother Lyall founded the Maalinup Aboriginal Gallery, a cultural centre showcasing Noongar culture and bush tucker via local artwork and communal dinners accompanied by traditional dance, music and storytelling.

Here, we ask Dale what we can learn from Noongar attitudes towards the land and how travellers can sustainably support Aboriginal communities.

Tell us about the Noongar community and its culture.

Our culture is rooted in a spiritual connection to the land of our ancestors. We originate from Western Australia's south-western corner, and Noongar country is made up of 14 different language groups. We're bound by a kinship system and unwritten lore passed down through our Elders which guides every aspect of our culture - our relationships, trade and custodianship of the land.

How does the Maalinup Aboriginal Gallery fit into this, what do you hope to achieve?

Our ethos is rooted in stewardship; we don't own the land, we belong to it. We are all custodians of the Earth and believe that we each have a responsibility to look after it for the next generation. As an Aboriginal-owned and operated enterprise, the Maalinup Aboriginal Gallery wants to share and preserve this local culture.

And how do you do this in practice?

We run Aboriginal cultural-awareness workshops and educational programmes with local universities. Visitors can buy Aboriginal art, hand-painted woodware such as boomerangs or clapsticks, and take part in culinary experiences that feature produce from the bush garden. We also run a catering service using these ingredients - Lyall's kangaroo sausage roll is very popular.

In Australia more generally, a brilliant law, The Resale Royalty Right, was passed in the last decade, helping to support Aboriginal artists. If you resell a piece of Aboriginal art for more than 1,000 AUD, you must pay five per cent to the original artist. Slowly but surely, it's helping to redress historical Aboriginal exploitation.

Tell us more about the bush garden. What type of food can we expect to try at Maalinup?

We collect a wide range of bush tucker from all over Australia for people to sample here, but we also grow herbs, spices, seeds and more in our bush-food garden. You'll find quandong [a peach-like fruit], wattleseed, pepperberry [a hot, aromatic spice] and lemon myrtle.

We would love to learn more about Aboriginal art. What can we see at Maalinup?

Within the cultural centre, our gallery focuses on local artists from the west of Western Australia who are usually not as well collected as those from Central Australia. As well as traditional Dreamtime stories - depictions of our spiritual beliefs - we also showcase a wide range of contemporary styles. I've gathered extensive knowledge of Aboriginal art and artists over the years, and we now offer a calendar of talks about native practices and dot-painting sessions for visitors.

As travellers, in what ways can we support Aboriginal communities when we visit Australia?

It's key that Aboriginal stories are told by indigenous people and heard first-hand. Ordinary, everyday interactions are very important for cultural awareness; travellers should seek out opportunities to connect with local Aboriginal people as much as possible. There is a fantastic initiative called Camping with Custodians, which lets travellers camp on Aboriginal lands as well as meet and mix with Aboriginal people. All camping fees stay within the community, creating income, employment and training opportunities for Aboriginal people, while showcasing their local culture.

For more information on Aboriginal Australian experiences visit australia.com, or find out more about Maalinup Aboriginal Gallery at maalinup.com.au