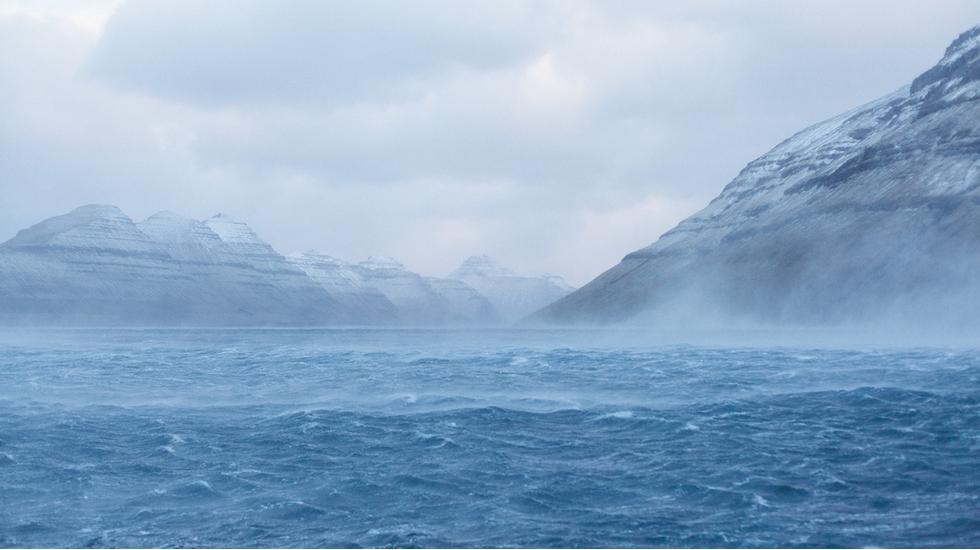 I I travelled to the Faroe Islands in December with the aim of photographing the landscapes of the Nordic archipelago at their most inhospitable. I did so partly to evoke the mythical theme of this issue by capturing the solemnity of the islands, and partly to visit at a time of year when there is little tourism.

Being a native Scot, one of my chief pleasures in life has always been to set off for the vertiginous Scottish Highlands at dawn, and I felt a familiar thrill of excitement as our aeroplane cut through bruised clouds and descended towards the Faroes.

The following photographs document the week I spent hiking with my friend Katie and our local guide Randi - up frozen mountains and along wind-battered coastlines. Because the days were short (there are just over five daylight hours in the depths of December) we often drove in darkness as Randi recounted the ancient stories of the islands. There was something rather haunting about those moments, as we moved silently through the inky evenings and listened to tales of the Irish monks who first inhabited the Faroes in the late 5th century. It was difficult to imagine those men settling in sheltered bays long before the Vikings even set foot there.

The Faroes have an ability to make one feel irrelevant in the face of nature's grander forces. The locals that we met had a deep reverence for the sea and hills, many of them having lost family members to cliff edges or underneath crashing waves.

I wanted to avoid the pattern in which I occasionally find myself when covering a destination - that of reaching a landmark, getting out of the car, photographing it and then moving on to the next one. I felt determined to create as close a bond with the Faroes as I could in the short time that I was there.

This series reflects my often emotional reactions to the scenes I was capturing. As we crouched under the Kallur lighthouse on Kalsoy, cowering from the North Atlantic gale that threatened to pluck us from our perch, we found ourselves in a giddy state - somewhere between laughter and tears.