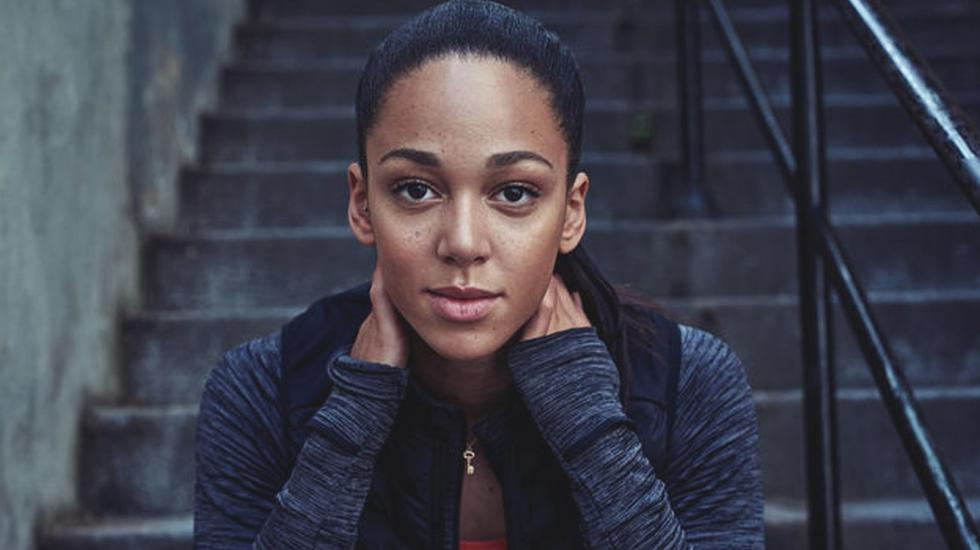 British British Olympian Katarina Johnson-Thompson (KJT) is no stranger to hurdling obstacles - she currently holds the British record in both indoor high jump and long jump. As she's always pushing to break boundaries, she makes on obvious choice as a brand rep for Nike, who we teamed up with on an editorial in Iceland for our latest issue, Vol. 13: Boundaries.

SUITCASE Magazine: How did you get into sport? Did you come from an athletic background?

Katarina Johnson-Thompson: No, I got into sport through my mum. She was a dancer and she travelled around the world for her career and that's what she really wanted me to do. She pretty much forced me to dance when I was young, from ballet to tap, so I was pretty sporty from a young age. She claims that's why I am good at jumps because they had me jumping when I was small. But I hated dancing because I was a tomboy, so when I quit that I had to find a different hobby; she instilled the need to have a hobby outside of school in me. I went through a couple of sports and eventually found athletics and it stuck.

SM: Was it something that you always knew you wanted to pursue professionally or was there a turning point for you?

KJT: For me there were a couple of turning points. I always knew in my head what I wanted to do. I was doing athletics from year seven and it was the one thing I really enjoyed. I used to go straight from school to the track and my mum would meet me there. When I knew I was able to do it professionally was probably when I qualified for the Olympics at the age of 19, which was a big turning point. The Olympics is basically the pinnacle of any athlete's career, so when I qualified for that and made it there I was like "this is what I want to do".

SM: What was the hardest thing about breaking into the industry?

KJT: I think it came quite smoothly for me. There was an age where a lot my friends dropped out because they didn't take an interest or it took too much of their time and they wanted to be different places, but there was nothing else I wanted to do.

SM: In terms of staying motivated, is it ever a situation of 'mind over matter'? Does your mind ever create boundaries - more so than physical limitations - or are you always confident in your talent?

KJT: Yes, probably when I get to the high jump I have to encourage myself. I think it's more mental than anything else as your target is there in front of you. If it's on a height I've never jumped before I've got to psyche myself up for it. There's other events like sprints and long-jump where you just run down, jump and hope for the best. So definitely in the high-jump event it's mind over matter.

SM: To what extent does being a successful athlete mean that you've had to sacrifice your relationships and social life? In terms of your personal life, are there sacrifices you've made that you regret?

KJT: At the moment I probably miss my dogs and that's about it.

SM: As a young woman, do you ever think that there are more boundaries for you to break?

KJT: I think in athletics there are always records to break whoever you are.

SM: What has been your greatest accomplishment?

KJT: Maybe the high jump that's the first record I broke or the pentathlon getting the second best ever score in the world.

SM: What has been your greatest setback? How do you deal with disappointment in your career?

KJT: Probably Beijing but I've come out the other side now and it's motivated me for this season. I've got a bigger and better motivation to come back and prove that I can win it in Rio. It has toughened me up and made me learn things aren't all plain sailing.

SM: Are there any hurdles that you still wish to overcome?

KJT: Yeah I think so. Every athlete's dream is to win an Olympic gold but I think I want to do that at least twice in my career, and I want to get certain point scores before I retire too. I don't have to do that in the Olympics but I want to know I can achieve my very best.

SM: What boundaries do you want to continue to push in your career?

KJT: My targets in the high jump and long jump and then the heptathlon. But what I need to overcome is probably the shot put and javelin; they are my weaker events that I want to get stronger in. I know I am not going to be great at them but I just want to get better in them.

This article was written in collaboration with Nike.