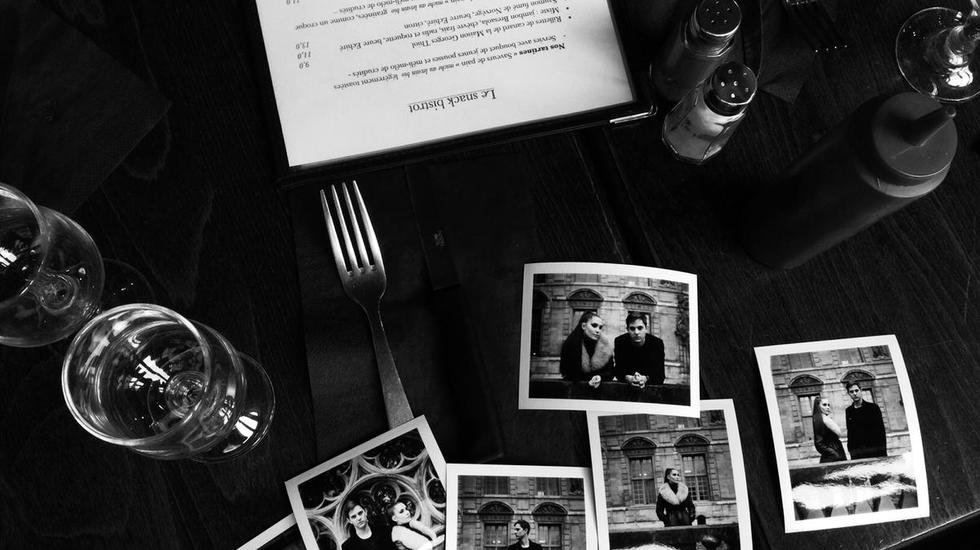 We We were in Paris, playing at David Lynch's club 'Silencio,' and had a day to explore the city and take photos. I knew that photographing Paris was like trying to cover a Beyonce track; something you should perhaps avoid, as you could never better what the likes of Henri-Cartier Bresson and Robert Doisneau have achieved before you. So I decided to steer clear of taking shots of famous landmarks and instead chose to capture fleeting moments and strange corners of the city.

There is something about Paris that makes you want to philosophise, perhaps this is part of the romance. For a city, the streets are quite calm, and you can wander at peace and discover fragments of the city on your own terms. One particular piece of street art I found was a quote accompanied by what looked like a Jacob Epstein drawing: "The 'system of patterns' traps us all, we think we are making decisions based on free will…But we are mistaken." The artist captures the mind of passersby and encourages them to think.

Later that afternoon we met up with my good friend Cyrus Mahboubian, who is a photographer and captured a couple of the images in this diary. He found a square called 'Hotel de Sully,' which is hidden behind two secret doors at the end of an arcade. The square was majestic and had an ancient tree growing high up in the corner, which contrasted with the staggering Parisian architecture.

Our show that night was an incredible if not slightly surreal experience. Everyone was attentive when we played, until the very end when we forced people to dance. The real Lynchian moment came after we performed, when the toweringly beautiful Arielle Dombasle sang along with Philippe Katerine - both French icons. The crowd went wild and ignored the signs asking for no filming or photography. I followed suit and took my own photo of Arielle performing.

Alpines will be playing live on Wednesday in London, Oslo Hackney