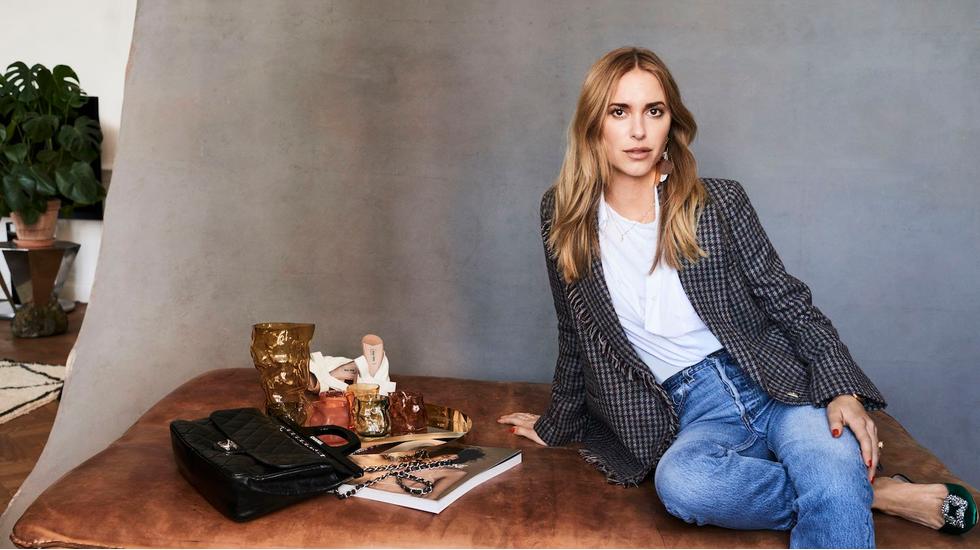 No No one masters simplicity quite like the Scandinavians. Today, it's all hej, Scandi-cool and à bientôt, French chic, as their timeless, confident style has everyone from New York to Berlin looking north for inspiration.

With their less-is-more approach, reinvention of androgyny and mix of materials, the Scandinavians are the modern-day muses. And while the UK has Alexa Chung and the US Leandra Medine as their fashion poster girls, Denmark's is Pernille Teisbaek.

Teisbaek is a textbook example of a self-made influencer. With almost 500k followers on Instagram, front-row tickets to every major show, a wedding feature in Vogue and the recent launch of her first book, Dress Scandinavian, the 33-year-old seems to have it all. Teisbaek entered the fashion world as a model, which was followed by stints as a stylist and fashion editor before starting her wildly successful blog, Look de Pernille, which brought designers knocking on her Copenhagen door. Today, she is the creative director of Social Zoo, an agency supporting influencers-to-be on their journey to social media fame.

In her style handbook, Pernille dispels the myth that her seemingly effortless style is accidental - if anything, every detail is carefully considered. Discussing attention to detail, layering, dos and don'ts, she assures us there's no quick thrown-on-and-done about it. Her top tip? If in doubt, go for a plain white shirt - "any woman's best friend" - which can be styled in a hundred different ways without losing its classic appeal.

Scandi-style may be understated, but our obsession with all things Danish certainly isn't (remember when we discovered Hygge?). To find out what it's really all about, we sat down with Teisbaek to talk culture, fashion and lifestyle.

Why do you think everyone is so hooked on Nordic style?

There were times when everyone wanted to look French, and now Scandinavia is having its moment. Scandi style is something people can relate to; it's both understated and understandable. Interior-wise, it's all about "Hygge", meaning a mix of both clean and cosy; something that makes you feel at home. That goes hand in hand with the way we dress, which isn't necessarily the norm. I guess it's more about the whole lifestyle here.

How does it feel to publish a book about your own style?

I was so fortunate when the opportunity arose and I'm very grateful now that it's out - and in so many different places. I am very proud of being a representative for Scandinavian style; it's truly an honour. I had an international reader in mind, and it's exciting how interested people are globally. We find that fascination with our style interesting because it's quite personal, but it's always fun to give tips.

What do you think makes your culture different from others?

Due to the weather, we're inside for eight to nine months of the year - I think we spend more time at home than any other culture! I have friends in New York who find it weird to host dinners at home. They meet at restaurants and bars, but we like inviting people over and making things more intimate.

Is that why your style is much more casual compared to other cultures?

The weather definitely affects our wardrobes, and it's why we do so much layering. We buy items to wear year-round, because otherwise you'd have too many clothes or you wouldn't be able to wear some of your favourites.

Can you give us an example?

You can team a chunky knit with trousers and boots in winter, or over a dress in the summer. We save up for classics and go-to pieces that we keep for years, and perhaps even decades.

Have you always lived in Copenhagen?

I grew up close to Copenhagen - north of the city, by the beach. But everything is close in Denmark so it only took me about 20 minutes to get to the centre.

Where do you live now?

I live in Frederiksberg, a more residential area of Copenhagen. There are only about 150 houses, which is quite unique. It's about 10 minutes from the centre and is my favourite area, especially for eating - new things are constantly popping up there.

Where should we stay in Copenhagen?

Sanders opens next month - it will be the new "it" place.

Do you have a favourite spot for breakfast?

Granola do the best coffee and Atelier September is also really good.

What about lunch and dinner?

In my neighbourhood there are two great Italians; Mangia and Spaghetteria. In the centre, I like Apollo, which is owned by a popular local chef called Frederik Bille Brahe. If I'm in the mood for something healthy it's got to be WeDoFood. You should definitely check out La Banchina too - a small café which you sail out to then sit at the dock drinking coffee or wine. It's really lovely.

And for traditional Scandi food?

Both Apollo and Sankt Annae serve typical dishes. A very Danish thing to eat is a rye-bread sandwich, or open sandwich as we call it. Get one of them and wash it down with a local beer or schnapps.

Tell us about your favourite things to do on a day off.

I love spending time at the Frederiksberg Gardens, close to where I live. There's a small lake there which you can sail around in rowing boats - it's gorgeous in summer. I also like the Louisiana Museum because it's so peaceful, and that's quite rare. Boat tours around the canals are lovely too, especially with a Danish ice cream in hand (served with homemade waffles). I would definitely visit some interior design stores - The Apartment is one of my favourites - then finish the day with a glass of wine at Beau Marche (where you can also buy furniture) and pasta at Spaghetteria.

Where do you go to buy clothes and jewellery?

I often go to an area called Indre By. There's Another Nué there where you can buy one of my favourite labels, Nué Notes. Holly Golightly and Storm are also there, but for something more high-end, head to the very chic department store Illum.

What Scandinavian brands could you not live without?

Probably Acne Studios and Ganni. But also high-street brands, such as H&M, who do amazing cashmere and sustainable cotton. It doesn't only need to be Céline or Gucci; mixing both is an art form in itself. It's about the overall look.

What do you think the future holds for Scandi style?

I hope that we get even better at embracing upcoming brands, as there is so much potential in Scandinavia. Hopefully, it's also becoming more of a go-to place during the fashion weeks. But we have so much more to offer than that - food, art, interior design - so to make the experience of visiting a more holistic one would be great.

Dress Scandinavian by Pernille Teisbaek is published by Ebury Press, £16.99.