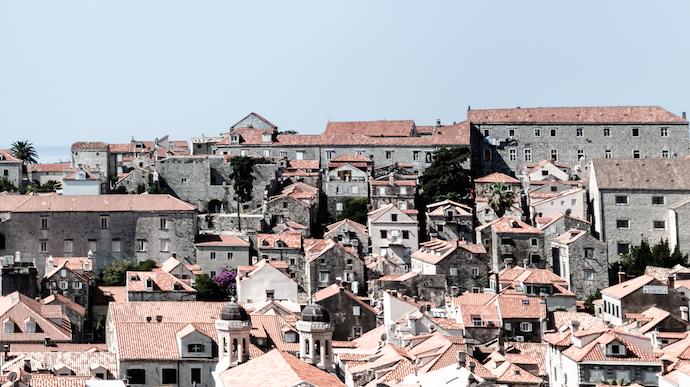 The The sun was hot and strong. It bleached everything to beautiful soft shades of pale. The air was sticky with salt from the sea and smelled of dried sage.

I loved exploring the old city of Dubrovnik, Croatia and its little winding streets, polished and worn by time and sea. I stumbled into one beautiful courtyard after another. I walked the city walls and ate delicious gelato. At night I either cooked in my charming Airbnb apartment above the city or sat in the open air at Kamenice enjoying a hearty dish of their mussels alla buzara and black risotto.

Temperatures soared each day before most had even gotten out of bed, making me crave the cool waters of the Adriatic without so much as opening an eye. Each morning I made my way to the Gruž market. Along the route, I jumped from the base of the old city walls into the cooling waters.

When I reached the market, I let myself be swept up into the rhythm of daily Croatian life. Under the open shade I shopped the rows of market stalls dutifully overseen by robust elderly women. I looked into each of their faces; skin, a rich raisin brown, chalky and deeply folded with soft wrinkles, not fully understanding what they were saying to me but enjoying the buzz of it all nonetheless. I watched captivated as their disproportionately large hands corralled my purchases of peaches, tomatoes, long thin summer beans and giant melons into blue plastic bags.

There is also much to see outside of the old city. North lies a maze of salt flats, vineyards and bays full of oyster farms. Islands dotted the steep, winding coastline. Along with my host, my husband and I drove out of the old city for a day exploring the landscape, local restaurants and vineyards. Along the road were hillsides furrowed with the scars of ancient 13th century terrace walls; they were an impressive reminder of just how long the area has been inhabited. At the bottom of one of these hillsides was a family and their fourth generation oyster farm.

We descended the dust road to where their house and farm sat at the edge of one of the smaller bays. Nets not in use hung from trees and empty oyster crates were stacked neatly against the building. The old men of the family sat in the shade preparing the nets for the next season of young oysters. We gathered, standing around a work table worn smooth by the thousands of oyster shells which have passed along it. A mixture of wine and mineral water was poured into everyone's glass and thick slices of bread appeared as a basket of oysters was hoisted from the sea. My host plucked one from the basket and with a swift turn of his hand opened the shell and offered it to me.

On another day we sailed from island to island - jumping from the boat into the clear bottomless sea when we were hot. We had a lunch of grilled fish with a salad of shredded green cabbage, tomato, salt and red wine vinegar.

Though we were clearly visitors, the people of Croatia were warm and open. On our last evening, we sat shoulder to shoulder at a small local bar with the few who remain residents in the old city of Dubrovnik. This little spot, only a few tables on the street and an exceptionally small wood paneled interior, had become our nightly haunt. As we sat with our backs pressed up against the now cool walls sipping our 50p wine on our tiny table, and listening to the hum of conversation, I couldn't help but feel as if I was suspended in a dream.