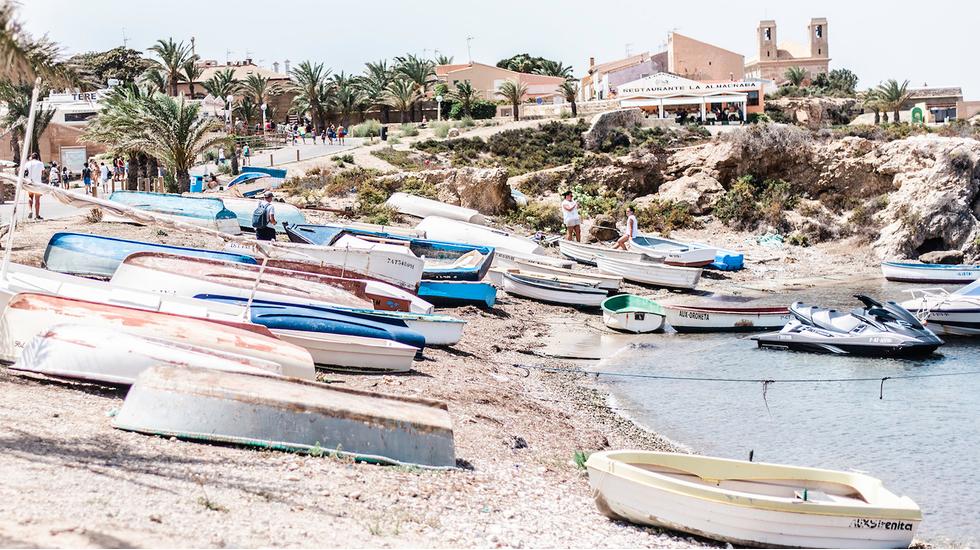 Floating Floating off the Valencian Coast, this rocky islet is the smallest permanently inhabited island in Spain. A 30-minute boat ride from Santa Pola harbour, its combination of sea, sand, history and sparklingly fresh seafood make for a perfect day trip from Alicante.

The population here hovers around 60, though that changes dramatically come summer when as many as 4,000 tourists descend on the island. I visited when it was relatively quiet.

Though the island is small, there's plenty to do and see. In contrast to the orchards and orange groves of nearby Alicante, Tabarca's vegetation is sparse - its thorns and cacti give it the appearance of a desert landscape. Rare birds perch along the rocky shoreline studded with secluded, seaweed-strewn coves. The island's calm, crystal-clear waters and abundant reef life make them among Spain's best for snorkelers and divers. Inland, past the lighthouse and the Nueva Tabarca Museum, narrow streets are lined with quaint houses, pirate-themed bars and restaurants serving caldero, Tabarca's signature fish stew.

Renowned for its flora and fauna, Tabarca's biodiverse waters have formed part of a marine reserve since 1986. Many of the catamarans that sail to and from the island are glass-bottomed to make the most of the abundant life beneath the waves. I spot starfish, shellfish and sponges.

In the 18th-century the island served as a refuge for Barbary pirates which swayed King Charles III of Spain to build the fortifications here - the remains of which are among the first things visitors see they approach by boat.

It took me about an hour to walk around the Tabarca - it's just 1,800m long and 400m at its widest - untroubled by the bustle of traffic and people characteristic of Spain's popular cities. On the way I stopped by several isolated spots, taking time to relax, sunbathe and have a picnic. I walked past the baroque church of St Peter and St Paul, through the town square filled with playing children, and up to fantastic viewpoints from which I gazed across the Mediterranean Sea.