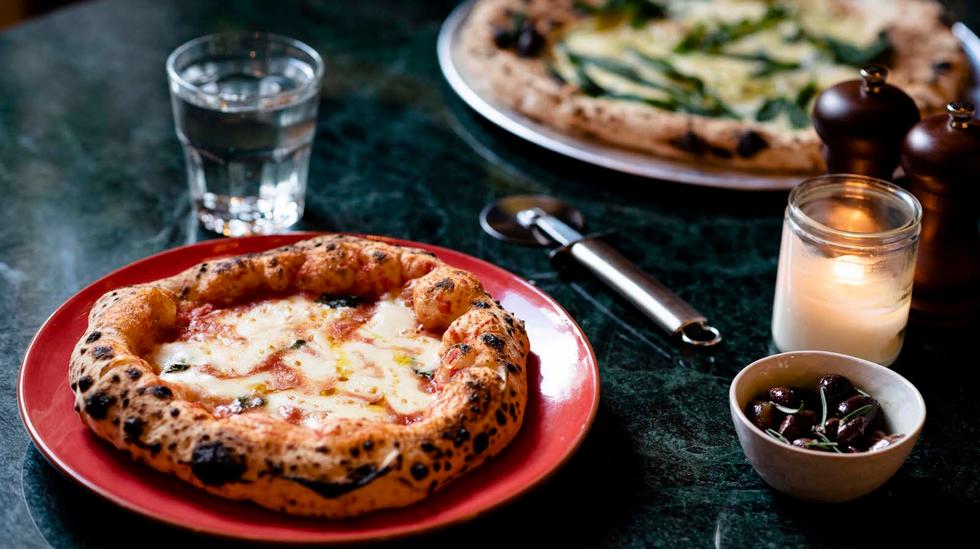 New Nordic cuisine was so 2010s. As we chart the rise of Copenhagen's Italian dining scene, we find tables dominated by mountains of nonna's spaghetti, leopard-spotted pizzas and the best aubergine parmigiana we've ever tasted.

Here's Here's something you might not know about Copenhagen, the city of foraging and fairy tales, mushrooms and mermaids: the Danish capital is home to a Michelin-starred Italianate ristorante that opened a whole two decades before Noma was even a twinkle in Rene Rezdepi's eye - and its impact has been vital in keeping people bibbed and carbohydrate-sated in a time when razor-clam broth with a side sprinkling of live ants has become de rigueur. I'm certainly not the only Copenhagener that's grateful for the enduring magic of a simple Italian dinner.

Living in Copenhagen, you can smell the sea. I grew up in England and had lived always in cities far inland, and so spent two years dousing myself all over in The Sound's seawater, gulping salty air blown down from Sweden, pummeling my skin with saunagus rituals and essential oils from the forests and frolicking in the water. I ingested Danish culture by way of the quintessential New Nordic cuisine I'd heard so much about. I sampled the mahogany clams, the West Coast oysters, Limfjord mussels and other fruits de mer - foraged and fished Dansk style - that twinkle on chic ceramics in starkly lit dining rooms. I saw how culinary experiments were revolutionising traditional open faced sandwiches, fish pickled to oblivion and meat obliterated by roasting.

Notably since the appearance of New Nordic's titanic champ, Noma in 2003, Copenhagen's chefs have eschewed the use of non-indigenous ingredients. Stark seasonal tasting menus became one big white-hot purity test.

Yet 20 years before Noma opened its doors, a celestial thing happened in Denmark - a Full Moon menu was created in a romantic waterside restaurant in Christianshavn.

The ristorante in question - one which arguably launched a thousand trattorias thereafter - was opened in 1983 and named Era Ora. It prematurely borrowed from the as-yet unborn New Nordic Kitchen Manifesto (coined in 2004), compiling a menu that celebrated the length, breadth and surrounding landscape and waters of a nation. Era Ora, somewhat controversially for sleepy, early 80s Copenhagen, got excited tampering with fixed, ancient regional Italian tendencies and created hybrid recipes. Not far away from point seven of the Nordic manifesto that would come to be, the restaurant and its contemporaries found new possibilities, procedures and variations on the traditional. Scandinavia with its future-forward sensibilities was a hotbed for such ideas.

Serving self-dubbed "Italian inner fusion", Era Ora hides unassumingly between old pubs and smørrebrød restaurants. Inside, it's all warm terracotta walls and futuristic chandeliers adorned with moons and stars. Run by the enigmatic Italian-Brazilian couple Elvio and Edelvita, its kitchen churns out marinated amberjack, Tuscan blue cheese, wild-boar ravioli and insanely pretty chocolate mousse made up like a lurid toadstool. Pasta usually makes a cameo on its tasting menu, and its wine cellar stocks more than 600 Italian bottles.

Elvio discusses the landmark moment when Era Ora gained its first Michelin star - which has since been re-awarded year after year. "We received our first Michelin star in 1997, back when we didn't know anything about Michelin stars. I remember when I got calls from friends and family congratulating us for receiving a star. I was like: 'What star!? Leave me alone I'm working!' Afterwards when my friend told me what I actually was, I realised that this is something big."

Why does Elvio think Scandinavians need Italian cooking so badly? "It brings the warm atmosphere of a country where any visitor gets wrapped in a combination of light, fullness, beauty and joyful times - where life gets another dimension, and conviviality wins over." Saluti to that.

Like H. C. Andersen fairy tales but with happier endings, many of Copenhagen's Italian kitchens are the brainchildren of a power duo: husband and wife/ bosom pals/ star-crossed globetrotting foodies/ the entrepreneurial equivalent of chalk and cheese - all coming together in the name of liquid gold. That being, olive oil.

Famo now has a handful of ristorantes with many native Italian chefs at the helm. Its restaurants consistently serve the best aubergine parmigiana in town while rapturously celebrating Danish and Italian produce combinations, a little like the manner of Italian fine-dining concept Brace. My favourite Famo branch is Saxo, which sits on a cobbled street near the central station of Vesterbro. It's the oldest member of Famo's four-restaurant family. Here you can expect a happy chaos and ever-changing menu of regional dishes such as fried courgette flowers, buckwheat ravioli with sage butter and tender osso buco - affordable upper-tier trattoria action. Close by is Bevi Bevi, a resounding favourite among locals, with its spin-off tonic and spritzes and its snip of a seven-course bar menu with delights including polpette in umido (meatballs in a thin sauce). A diehard vegan friend of mine even tried its tartare with pistachios and cornichons: she simply felt she had to.

Non si frigge mica con l'acqua literally translates to "you don't fry with water" - you shouldn't do things by halves it means; do it really, really well. With this in mind, the best family-run trattoria in Copenhagen is probably Public, a self-proclaimed "Social Italian Eating Bar" which has made its name not least for its sea bream cooked in "crazy water" as well as traditional staples. Owners Johan (Danish) and Cindy (Venetian) have created a low-key glamourous ambience, impressive for such a new spot that graduated from a street food stall. Enjoy Public's delectable deer stew with gratinated fennel and a grappa, and you'll likely spot the couple. To quote Tony Soprano: "When you're married, you'll understand the importance of fresh produce."

If you enjoy a more Italian-American vibe, visit tourist vortex Nyhavn and nab a coveted backyard table at feasting spot Fiat that's all candles, plants and dark wooden floors. Order the Sardinian pasta fregola and grilled dorado. You can also book wine tastings with its charming staff, who are amazingly diligent for such a bustling restaurant. It's reliably the kind of place you take your mother, whose appreciation of anything raw or carpaccio or deconstructed is slim - and the orange tiramisu is worth the trip alone.

To quote Tony once more, because Osteria 16 only has a set eight-course option: "I went ahead and ordered some for the table." Here is a gloriously fuss-free osteria (actually, one of three peppered around Copenhagen) serving nothing but the freshest stuff that delights even the most philistine of Italian-enjoyers. You'll never order carbonara again after experiencing the metal-platter primi of raw scampi and peaches drizzled in oil or Piedmontian vitello tonnato or arancini. A secondi of pork neck with anchovy salsa verde or fresh spaghetti with shaved bottarga proves that Osteria 16's second, newest outpost's nonchalant point that great food is often best served on unpretentious crockery. When we rose to leave, owner Morten bounced out of the kitchen and invited my comrade, a budding chef, to join him at the vegetable market the next morning.

If it's pizza you're ravenous for in this neighborhood, take a detour from the oversubscribed, over man-bunned and very busy BÆST and enjoy the wood-fired sourdough brilliance in the fun pink-and-white, lakeside joint Frankie's Pizza. Try its "Honolulu" with spicy pineapple chutney or the controversial but slightly wonderful Danish iteration: the steak bearnaise pizza.

Pizzeria Luca is Copenhagen's best place for all-purpose antipasti (meatballs, burrata and to-die-for marzano tomatoes) and 72-hour cold-leavened Neapolitan dough - and despite the fluffy, leopard-printed wonder of its pizzas, the restaurant remains free of the Instagram influencer brigade. Its owner Lasse backpacked for years before landing broke and destitute, washing dishes in Italy, learning the language and obsessing over the food. On returning to Scandinavia, long-ruminating on the idea of giving Danes convenient, excellent Italian fare in a convivial setting, he built a mini food-and-cocktail empire across the capital, including this restaurant named after renowned pizzaiolo Luca Platania.

Luca is found by the water, near the pretty parliament buildings, just outside the bustle of the inner city and on my way home. It's a please-all locale - they also do wild boar pappardelle, for all my sins, and the Tanqueray negronis are unavoidable. At just two months young, Pizzeria Luca was placed at number five in the 50 Top Pizza ranking, which is an almighty deal in the pizza universe.

On some chilly Copenhagen night soon, order the puttanesca or nduja, and raise a glass of limoncello to the stars that owe to the rise and rise of pizza, pasta and so much more.