This interview appeared in Volume 11 of SUITCASE Magazine.

"72 per cent of the earth's surface is water. We in fact live on Planet Ocean, not on Planet Earth"

These are the words of Chris Gorell Barnes, the co-founder of BLUE Marine Foundation. BLUE is a UK-based ocean conservation charity that was set up in 2010 by some of the team behind the award-winning documentary The End of The Line. While the film alerts viewers to the dangers of overfishing, it ends on an optimistic note, calling the crisis in the oceans 'the largest solvable problem on the planet'.

"The ocean has an amazing propensity to recover if you look after it properly, " Chris says, explaining that there are two elements to marine protection. The first lies in creating 'no-take' zones while the second supports sustainable fishing. "In reality the best way is to create a marine-protected area which has no commercial fishing but that allows sustenance fishing for locals."

Since BLUE's inception five years ago, the small NGO has been pivotal in securing the two largest marine reserves in the world. The first protected area surrounds the Chagos Archipelago in the Indian Ocean, and the second will span an area of 830,000 square kilometres around the British overseas territory of the Pitcairn Islands.

BLUE is aiming to help protect 10 per cent of the world's oceans by 2020. There will be a focus on the management of sustainable fisheries, but Chris stresses the importance of the travel and tourism industry's role in reaching the target. "The demand from luxury travellers for pristine oceans with fish is high. Who doesn't want to go to the hotel with the best ocean? It makes business sense for a hotel, an island, a country to have well-protected oceans."

Through imaginative collaborations, like partnering with KENZO on a limited edition blue version of its famed Tiger sweatshirt, BLUE speaks to the future generations. "It needs to be sexy, right?" Chris says. "The ocean is beautiful and you've got to make it something that people want to get involved in. If you're going to stand for something, then make sure it matters. What do you stand for?"

Chris gives his steps towards sustainability for the world's oceans:

UNDERSTAND the importance of the world's oceans and recognise that the ocean is not just a food source. So much attention has been given to rainforests, which are hugely important, but the oceans are so much more vast and home to up to 80 per cent of all life on earth. ASK

QUESTIONS about where the fish that you're eating comes from. If you're being served endangered Bluefin tuna, then according to WWF's endangered species list, that is on the same level as having chimpanzee or tiger. Use the MSC fish guide and demand that you eat the right fish.

TAKE ACTION and get involved. We've set up the BLUE Marine Yacht Club - Prince Albert of Monaco is a patron and Ralph Lauren has designed a burgee for exclusive use by BMYC members. JOIN BLUE is a new fundraising initiative that we've set up for corporations and individuals who want to be part of the solution to the crisis in the oceans. 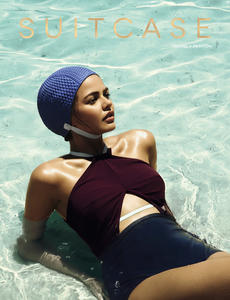