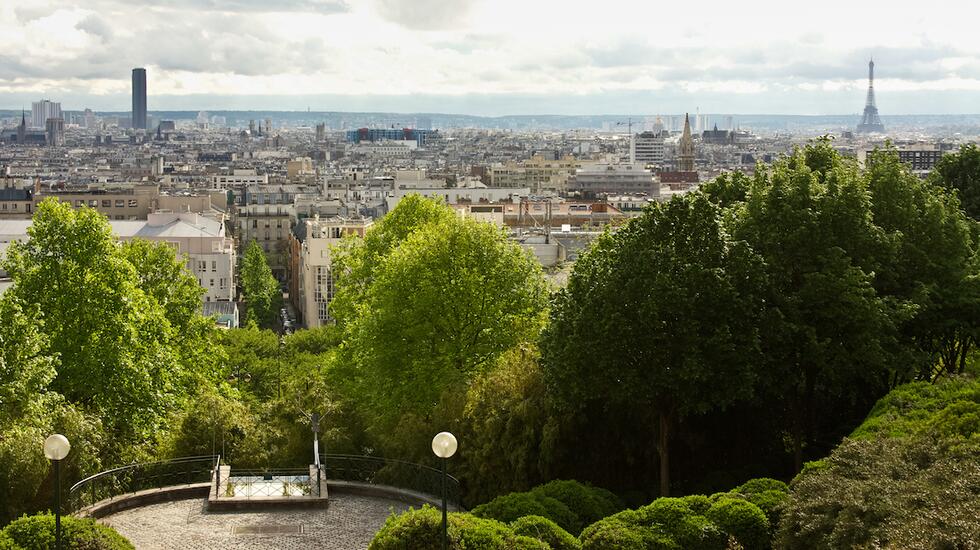 Distinctive and diverse, Belleville has a healthy rebellious streak - it was a rallying point of various uprisings throughout the 1800s - and an open-minded attitude, with plenty of ethnic and religious minorities living side by side in a kind of cultural hotch-potch. As you make your way around, expect to share the pavement with local artists draped in chic thrift-store finds and hear street vendors hawking fresh fruit and veg. It's an off beat part of town, and refreshingly affordable with plenty of bouis-bouis (cheap and down-to-earth) dining spots dotted around.

The whole neighbourhood, whose hills were once the site of gypsum quarries, slopes like a pinball board, adding character (and a workout) to a walk around town. Appreciate the lofty views from Rue de Belleville: as you climb the street, you'll start glimpsing the iron spire of the Eiffel Tower in the distance. Those who make it to the top are rewarded with one of the best views (and some of the nicest café terraces) in town. If it suits you better, you can also climb the street aboard the 96 bus.

Art lovers will appreciate the studios and dinky galleries that dot the area, many of which are open to the public. After hours, head to some of Paris' best going-out venues to dance the night away. Start the evening with happy-hour cocktails at local favourite Aux Ours on Rue des Pyrénées, before heading round the corner to La Bellevilloise. Spend the night dancing to DJs spinning electro beats or live bands playing jazz and soul, depending on that week's visiting musicians.

As the name alludes to, this stylish boutique hotel celebrates the diversity of the Belleville-Ménilmontant area. Its director, Joris Bruneel, worked facilitating hotel acquisition for giants like Accor before deciding to open this more personal, neighbourhood spot following the shock of the November 2015 attacks on Paris. The joyous decor features paintings from local artists, and the restaurant - helmed by French-Afghan chef Clarie Féral-Akram - plays with Silk Road flavours on a colourful, veg-packed menu. A vibrant brunch offering includes coffee from local La Brûlerie de Jourdain. Cosy rooms blend modern and vintage elements, and guests are invited to book "ritual" treats, including massages, magnet therapies and even tarot readings, to embellish their stay.

Hôtel Scarlett offers lots of character at an affordable price. Housed inside a formerly industrial building that stood empty for years, it's known for its great design and high-quality amenities. In the common areas, typical Parisian parquet floors blend with industrial light fixtures and photographic art on the walls. You can expect a warm welcome and comfortable rooms, each one decorated a little differently. The hotel has curated a list of local recommendations for guests, from restaurants to galleries, making exploring the area a breeze.