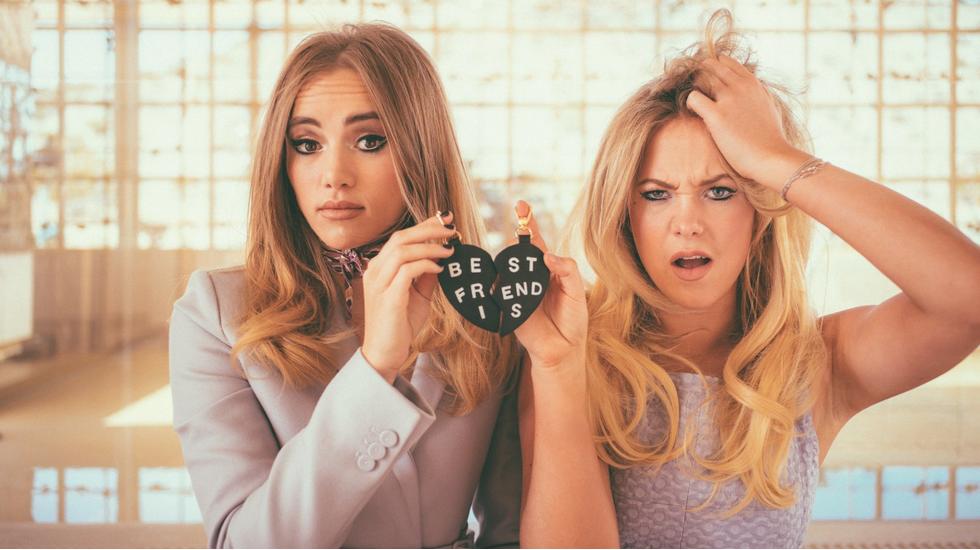 It's a hot, dry day in Joshua Tree, California and Poppy Jamie and Suki Waterhouse are sitting in a house covered with mirrors and painted in gold. In the makeshift dressing room, Poppy has a face mask dropping off the sides of her face. Suki sits in an Adidas tracksuit, laughing as Poppy tries to talk and keep the product intact. "You know the cameras are on," Suki giggles. Poppy shrugs and continues.

Watch Suki and Poppy behind the scenes on The Getaway.

We are two hours away from the pair's home in Los Angeles (although it feels more like a million miles) and the two British girls are discussing how they have dealt with living in LA. It's been called the loneliest and most brutal of all American cities, with an industry and accompanying social scene which is notoriously skin-deep. "We kind of take it seriously, but then we also really don't," says 24-year-old model and actress Suki. "When you're really in it you quickly learn that it's all just a pile of bollocks and the best thing we can do is have a sense of humour about it all."

It is the girls' shared sense of humour that has helped them navigate the city since they first met there in 2013. Suki saw a girl wildly body-popping at Teddy's nightclub in the Hollywood Roosevelt hotel and immediately thought: "I have to be friends with her." She proceeded to invite said girl to a Thanksgiving dinner she was hosting. Poppy showed up in a tartan mini-dress with a huge bow on top of her head and a massive orchid. "It was mortifying," Poppy mock wails, "I thought it was a party and there were just six people there." Suki recalls: "Everyone was asking me who the hell this girl was, and I just said I really have no idea…I met her last week."

At the time, Suki had been living in LA on and off for 18 months. She was well on her way to becoming one of the most exciting models of the moment (she was the new face of Burberry) and was dating Bradley Cooper. Poppy had recently relocated from London to pursue her presenting career. And after the infamous YouTube video entitled 'Jude Law interview fail', her Bridget Jones charm was on the brink of bringing her success. In the clip Poppy falls off her chair while interviewing the actor and is unable to gain composure, causing Jude Law to begin cracking up himself. He says, "you came in like a tornado...and fell like a stone," going on to call Poppy "a breath of fresh air".

"I think if we hadn't found each other it would have been a very different story," says Poppy. "Having a best friend in LA who is English means we have been able to take on the city and laugh at everything," continues Suki. "We go to parties and just lie on the floor in a corner, dying [with laughter]," says Poppy.

Throughout our cover shoot, laughter plays a crucial role in the proceedings, and occasionally takes precedence over getting the shot, or listening to the director. Watching Poppy and Suki interact in this whacky desert home seems like something of a snapshot into their lives; revealing how their fun-loving spirits have helped them face any challenge.

The giggles subside as the southern Californian sun begins to drop behind the Acido Dorado home, causing its acid-tinged surfaces to glow. Covered in mirrors, the house reflects your image at every turn and multiplies it, in a trippy, voyeuristic experience. The home is a garish ode to modern culture by architect Robert Stone, and takes a while to wrap your head around. It's fabulous, overwhelming and overtly sexual. There's even a paddling pool with a set of poles.

Poppy and Suki, however, take the structure in their stride. Dressed in pretty pastels as Hollywood vixens from the Sixties, they weave themselves through the iron grids and around the poles, dancing across raised platforms and floating through the desert. They pout and pose at all the right moments using the mirrored surfaces to reflect and magnify their image.

But one moment's eye contact is all it takes to break the spell. The girls dissolve in a fit of giggles, and seem to bring the whole house down with them.

On set, they document every moment on social media. They take it in turns to film one another, shouting compliments and directions. The director has temporarily taken the girls' hip-hop playlist off the speakers to try and get them to dance to chic French pop music. With Suki's own Snapchat rolling, she body-rolls and twerks. You can't help but laugh. By the time we finish for the day, their Snapchat videos are everywhere, reshared and reworked on Twitter and Instagram, much like the mirrored tiles of the house behind them.

"Social media isn't going to disappear," says Poppy, who is currently working on her own start-up called Happy Not Perfect. It is a book and an app looking at positive practices, empowering the user to rewire their brains to live happier and more mindful lives. "Obviously [social media] has been a source of insecurity for everyone, including us. But it's about managing your relationship with it." She explains how the girls enjoy creating funny videos of times they have spent together - trips abroad or geeky moments at home. "I think since we have turned social media into a ground for creativity, we have had a much healthier relationship with it."

"Poppy is Miss Positivity," says Suki, mock-rolling her eyes, explaining how her friend will never let her succumb to negative thoughts. "We both have things that the other one doesn't have. Like ying and yang. Poppy's the angel and I'm the devil."

Suki is definitely the fiercer of the two, opting for a wave to greet everyone on set as Poppy embraces everyone from myself to the camera assistant. But Suki can, I come to see, be equally as silly when she wants to be, and her softer side always seems to come out when she interacts with her friend. She has a cool confidence which you can see would lend itself well to the movie industry, and will appear in her first lead role alongside Keanu Reeves and Jim Carrey this autumn. In Bad Batch, a dystopian love story set in the Texas desert, she plays a "badass amputated girl in the desert, Mad Max style," says Poppy adoringly. "Suki is a lot more fearless than I am. I'm a bit of a worrier, and she makes me fearless."

This fearless spirit has seen the duo get themselves into some pretty hilarious situations - from skydiving with Rastafarians in Brazil to getting kicked out of The Magic Castle nightclub in Los Angeles. Not all their adventures are quite as glamorous though. The pair recently went to the Amazon where they travelled deep into the forest for three days away from any phone signal. On Poppy's dad's birthday, she needed to find service, but a bad encounter with some fresh fish left her with terrible food poisoning. The girls dramatically recount Suki jet-skiing out of the Amazon with Poppy "literally throwing up off the back".

One thing is certain though - Poppy and Suki are used to having to get up and go. Their 'yes' attitude coupled with their insane business schedule means they are constantly travelling around the world. As a result, they decided to launch their own accessories brand, Pop and Suki, made up of multipurpose bags, perfect for a life on the road. "We were trying to make products we needed. We wanted something that could give us a good price, good quality and could be your bag for every situation. You could wear it around your waist to a festival, you could have it as a clutch on a red carpet, or you could wear it as a really chic camera bag."

Poppy and Suki are the co-founders, together with friend and serial tech entrepreneur Leo Seigal, previously of Crazy-O (a crowdfunding platform for influencers and their favourite charities) and represented.com (a custom merchandise platform for influencers). The line will launch in October with the camera bag - a multi-use over-the-shoulder box bag in black, brown and pastel pink available for personal monograms - and the shopper tote, for what Poppy calls those "throw-everything-in-and-go moments". They will also have a selection of accessories, including a simple gold necklace called 'the chain', which can also be worn as a bracelet, anklet and body chain. With friendship as the brand's main theme, they will no doubt use their gang of bright young things to market their product accordingly, selling direct to the consumer. The three friends, however, are mostly excited about hanging out all the time. "We thought, how can we turn our working day into a gossip session at the same time?" Poppy jokes.

"Hustling to achieve their goals is a massive shared value," says co-founder Leo when explaining how hard the girls have worked to get where they are. He says of their graft: "It takes a certain type of person to move from London to LA at a young age." Some of Poppy's friends, she tells me during a break in the shoot, had nasty reactions to what they called her "new life" and would send her horrible texts at the start of her career. But she says that as new friends, she and Suki have been able to "let go of learned behaviour" and push forward at their own speed; they can be exactly who they want to be. LA in that respect has been liberating. "There's no such thing as impossible in LA and I love that optimism," says Poppy. "It's a culture of 'we wanna make shit happen,'" agrees Suki. "There's a lot more freedom because everyone is anonymous. Everyone has just come there; no one is from there."

It's now 7PM and the sun has fallen behind the mirrored house, causing its surfaces to lose their reflective quality and slowly fade into obscurity. Poppy Jamie and Suki Waterhouse peel off their outfits and scrub off their make-up as we pack up the set. There will be no more cameras rolling or posing for today at least - but that's really not what this friendship is about. The girls erupt into laughter and break the silence of sunset in the Joshua Tree Desert, kicking up dust as they pull away and leave the house behind.