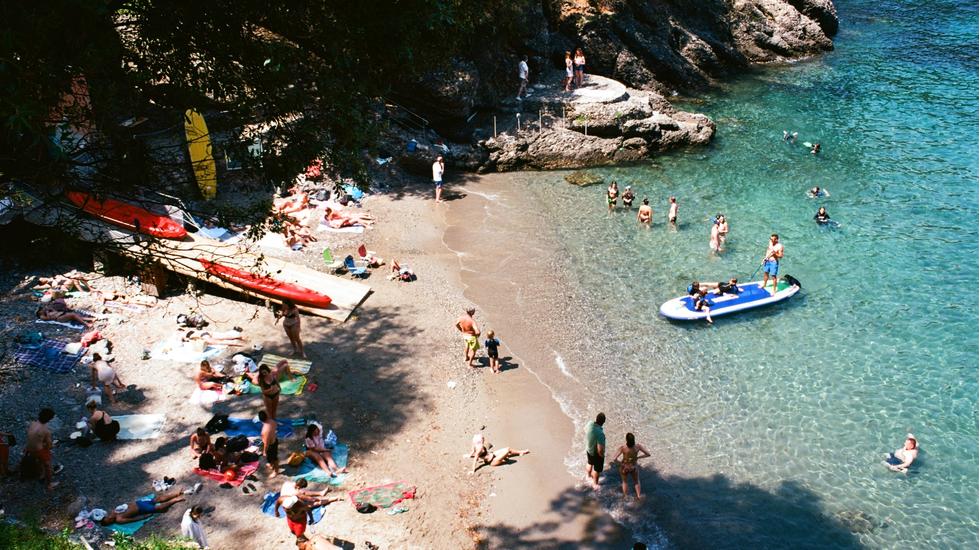 In In the post-war boom years of the 1950s, 1960s and 1970s, when Hollywood socialites and British royalty rubbed shoulders with Saudi millionaires on the polished decks of yachts in Portofino, one man was always there to capture the scene on a small Leica camera. George Allen "Slim" Aarons had access to the fabulously wealthy in their bathing suits, returning to Portofino many times to photograph La Dolce Vita. Not only did Aarons immortalise these places and moments on 35mm film, he helped to create them.

Publishing his images in Harper's Bazaar and the now-defunct Holiday magazine, Aarons ignited a wanderlust in Americans fascinated by "how the other half lived". He painted an iconic portrait of the Italian seaside: sun-bleached pastel villas and stripy parasols, elaborate alfresco spaghetti suppers and turquoise seas, red Vespas and bougainvillea. Then, as now, the impossibly sweet harbour of Portofino was a photographer's dream. The harbour is a sparkling vision set against a backdrop of colourful shuttered houses, with every well-heeled visitor a Slim Aarons shot just waiting to be taken.

At the heart of this old-school glamour is Splendido Hotel, and its low-key-luxe little sister Splendido Mare, down in the port. The harbourside spot has, over the years, played host to the likes of Ava Gardner, Winston Churchill, Elizabeth Taylor and the Duke of Windsor. Follow in Slim Aarons' footsteps today and you'll discover that the Italian Riviera is just as magical as ever. You only have to set off along the coast road to Paraggi Beach or watch the elegant wooden gozzo boats chug around the headland to feel the world shift into a hazy, delightfully vintage gear.