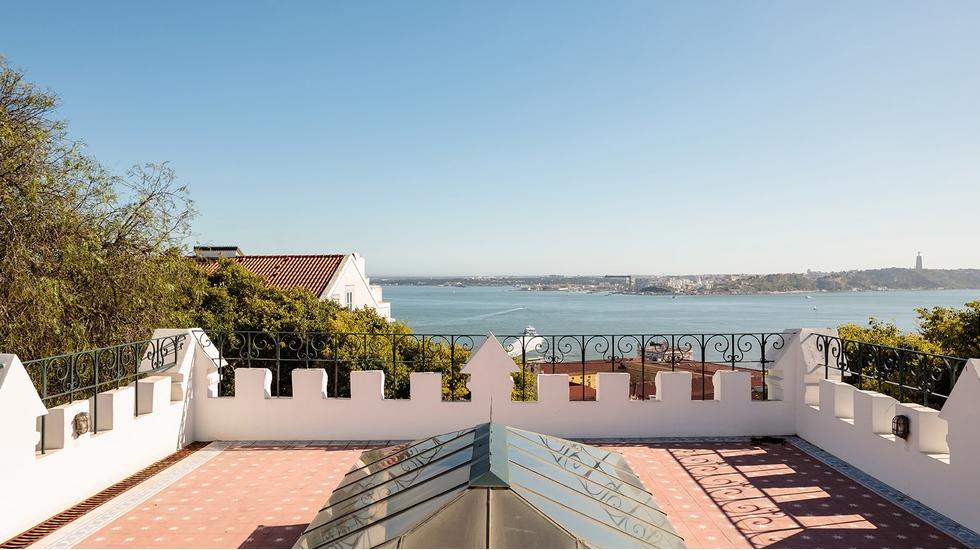 Lisbon Lisbon - dubbed "The City of Seven Hills" - is topographically challenging, particularly for those teetering around in vertiginously high Louboutin heels. Still, here I am in the westernmost capital of mainland Europe (red-lacquered soles stowed in my carry-on), en route to visit the Paris-born designer Christian Louboutin at his second home. Hitting the inclining cobblestone pavements in the direction of the Alfama district, sporting a more practical - if slightly plain Jane-esque - pair of pumps, I am reconciled by the knowledge that the majority of this afternoon will be a stylish and shoe-dominated affair.

Originally a halfway house for trips between Paris and his Portuguese seaside abode in Melides, Lisbon was once little more than a convenient pied-à-terre for Louboutin. Now things have changed somewhat, although he still doesn't sketch here. "I draw by the beach. I do the summer collections in hot places [he designs the majority of such collections in Brazil] and the winter collections in a cold place. The climate affects me, but the environment itself is not that important."

It would be natural to assume that creative environments may have, to varying degrees, impacted Louboutin's output throughout the course of his career - consider his notebooks full of outrageous, toe-cleavage exposing shoes sketched by the then 17-year-old and aspiring designer while working at the Folies Bergère in Paris. While sexiness has been his long-standing bread and butter, there is something more nubile about his collections of late and, if my current surrounds are anything to go by, the designer is certainly leaning toward the more eclectic.

A collector of objets d'art, and a creator of them too, Louboutin has a penchant for antiques and is regularly spotted perusing oddities and artisanal items across European cities. He picks up a lot of handcrafted pieces on his afternoon antique appraisals, and with homes in various international outposts, there is little shortage of spaces in which to place them. To fresh eyes, Louboutin's energy-infused, storied home in Lisbon is a representation of his personality, his countless travels and varied interests. Here, his appreciation of savoir faire and craftsmanship is palpable. "My father was an artisan, a cabinet maker, a carpenter. When I was a child, I didn't realise that I liked artisanship because of my father, but now that he is dead, I have realised that my attention to detail comes from his creations," he explains.

Considering his shoes as design objects in their own right, these cultish objects of desire have, on occasion, been repurposed to serve something other than feet. "I had finished wedding shoes for a friend of mine who is getting married soon and she was super excited," Louboutin recalls. "When she received them she said, 'I'm not going to touch them, I'm going to place them on my bookcase, I cannot take my eyes off them.' I actually used to do that too, with a pair of shoes that I had bought at a flea market in Paris when I was a teenager. They were a pair of pink pumps with a black top, 1950s style - I used them as bookends."

Looking around the room, I cannot see any displays of repurposed footwear. Catching my gaze, Louboutin also starts to scan our surrounds, but not for shoes. He's moved on to objects in a broader sense and begins stating the provenance of individual items as his eyes shift focus. "That is French, that is Portuguese, that is Indian, that is French, that is English, that is American Indian, that is Mexican, that's from Venice… it's a lot of things and a lot of different influences".

Thematically speaking, Louboutin's household items confuse, beguile and distract guests with their varying origins and reflections of their owner's parentage and passions. Still, this particular home harbours a considerable number of Portuguese wares, which the fashion designer is only too willing to explain to me. Donning an ebullient, block-print striped jacket that he picked up on a recent trip to India, he turns to the task at hand. Passing an Indo-Portuguese 17th-century table, we commence the identification process of the peculiar patchwork of Louboutin's favoured Portuguese pieces.

Resting just off the landing, this graphic portrait of the Portuguese explorer Vasco da Gama by French artist Lucien Coutaud is figurative in style. Considering that Coutaud was the son of a Provençal goldsmith, it displays a crossover between French and Portuguese identities, as well as the savoir-faire lineage from which both Louboutin and Coutaud descend.

Historic azulejos (Portuguese glazed ceramic tiles) are present in every room of Louboutin's Lisbon home. Lending to their opulent surrounds, those with the most impressive patterns are displayed in the back lounge, where two large rectangular pieces are affixed to the wall. In the central room, on the same floor, the infamous tiling is finished with resplendent scalloped edging.

These gallant, golden light features flanking the corridor walls towards the rear of Louboutin's home are a bespoke design by Latoaria Maciel. The small shop, located on the edges of Alfama, manufactures traditional and modern lanterns and lamps. The delicate metalworks are predominantly hand cut.

Bulgarian artist Boris Deltchev created this mural, which mirrors the tiled patterns of traditional Portuguese houses, softened by heavy vegetation. As you move up the staircase the pattern shifts the balance of white on top to overtake the wall space before blurring. The plants depicted are either found here in Lisbon or in Louboutin's garden by the sea in Melides.

Symbolising Louboutin's passion for Portuguese craftsmanship, this black lacquer pot with a knowing face is positioned in the garden. Other similarly shaped pots are plotted across the house, teetering from corner shelves and planted on tables. Vida Dura is also a lifestyle store conceived by "boy of the flowers" Rui Freitas, who is Christian's partner.

"I added the fireplace myself," Louboutin smiles. He built the chimneypiece from scratch, adding white putti (cherub figures) to contrast with the royal-blue tiling. On top is a unicorn sculpture designed by Janine Janet, a sculptor and artist who worked closely with the fashion designer Cristóbal Balenciaga.