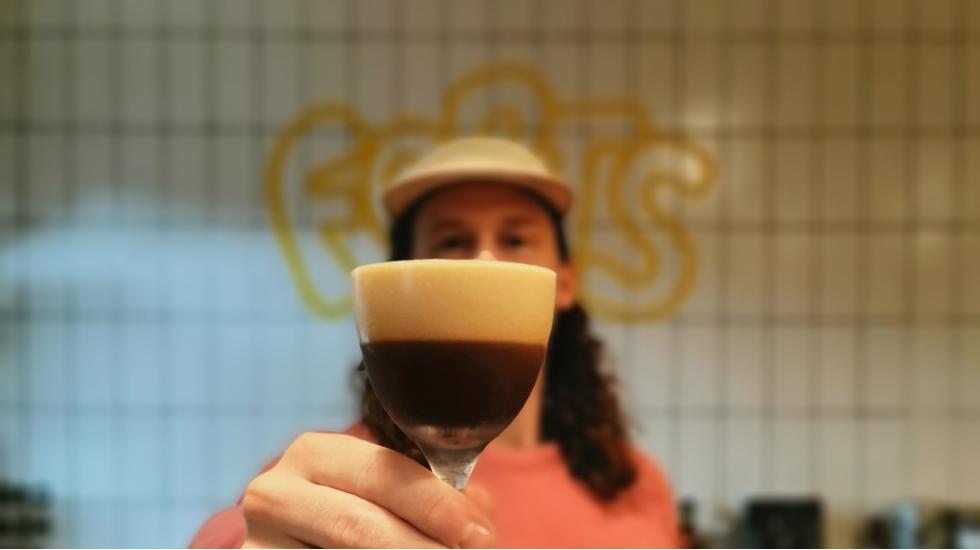 Will Will Pitts is the kind of barista that we want as our best mate. Originally from the surfer town of St Ives, he's spent the last few years racking up a string of accolades thanks to his coffee-laced creativity. He won the UK Latte Art Championship in 2019 for recreating the Loch Ness monster and placed first in the UK Coffee in Good Spirits contest for his boozy brew-based creations. Now, as the owner of Margate's recently opened Forts coffee shop, Will's sharing with us his favourite spots in the neighbourhood.

Will had been on a day trip to Margate when he spotted a "for sale" sign in the window of a derelict café not far from the seafront - and he knew he found his first coffee-shop site. Fuelled by plenty of caffeine, a full refit preceded Forts opening to rave reviews and queues along the coastline. Thanks to Will's natural flair for craft brews and his penchant for alcohol-spiked tipples, Forts has quickly cemented itself as Margate's go-to hangout for a good cup o' joe. High-street coffee chains? No thanks. This is the real deal.

Here, Will shares with us the secret to nailing an at-home espresso martini, where to buy good coffee from and the apothecary responsible for putting Margate on the map.

Where are you from and how has that shaped your business?

I'm originally from St Ives, in Cornwall, which is a really beautiful but very seasonal place. Since the age of 14, I bounced around different jobs in hospitality. Starting as a pot washer, I also worked as a chef, a bartender, a waiter, a sommelier and, of course, a barista.

What was the inspiration behind Forts?

I've always wanted my own café, I had just never found the right site. Forts has actually been a café since the 50s, when it was called Forte's (it was owned by an Italian bloke called Tony Forte). I came to Margate on a day trip, saw Forts, with a big "for sale" sign in the window. I instantly fell in love with it and knew I had to bring it back to life.

You're originally from St Ives but relocated to Margate. What drew you?

In my time between St Ives and Margate, I spent a few years working in east London's coffee industry. I'd say Margate is 50 per cent Cornwall, 50 per cent east London, which is perfect for me. It's got a bit of grime and a load of artists, but you're by the sea and everyone is really chilled out.

Describe the vibe of the neighbourhood…

There's a cool mix of Kent geezers, eastern Europeans, and east-London hipsters in the area, which means you can go for a single-origin espresso, then walk down the road to a shop which has 20 different Polish lagers. In short: it's perfect.

Talk us through your morning routine in Margate...

I generally get to work around 7 am, so there's some kind of pre-caffeine fix blur between 6:30 and then. Once I'm there, it's time to dial in the coffee. This means tasting the coffee and creating a recipe that we'll use for the day. After taste-testing (read: drinking all the espressos in the shop) the blurriness clears and I go into hyperdrive, which is lucky because that's when it's needed. It's then another blur for four hours, from when we open until it chills out again.

Where should we go in Margate for a hangover breakfast?

Dalby Café is just around the corner. It's famous for doing a great full English. Pete Doherty once ate the world's biggest breakfast there too (honestly, Google it).

What about somewhere for dinner with friends?

My favourite place to eat in Margate is Dory's, right on the seafront. It uses the freshest, most sustainable fish it can get, and has a great wine menu. Plus, they're really nice people.

Where shall we shop for gifts in Margate?

Just round the corner from Forts is Haeckels. These guys have pretty much put Margate on the map. It uses locally foraged ingredients to create amazing skin creams and nice smelly stuff. Honestly, I'm not the best at explaining what they do, so just go there and be prepared to restock your bathroom shelves.

Any other independents in the neighbourhood that you love to buy from?

Any secret spots that only locals know about?

I generally hang out between the Rose in June and Bar Nothing. They both serve up tasty pints and great hospitality. In non-Covid times, Bar Nothing is open very late, if you want an until-the-early hours party.

Lockdown 2.0 has us reaching for our at-home bar. Any tips on creating our own coffee-based cocktails?

Use nice coffee. Sounds stupid, but if you go to a good coffee shop and ask for a bag (even ground is OK), you've got a much better base to work with. Although, I do know a guy who makes a banging espresso martini with instant coffee...

You're a latte-art champion and we've only just mastered (wonky) hearts. How can we improve?

Two things. One: slow down! Whenever I teach people, I always find they're pouring way too fast. Just take your time. Two: make very decisive movements. You have to boss it and be confident.

Any independent coffee roasters we should know about?

So many! Origin, Assembly, Curve, Colonna, Bailies, Bonanza, Yallah. I could go on and on...

Finally, what should we buy from Forts?

French toast, a filter coffee and a Forts mug. The ideal morning right there.