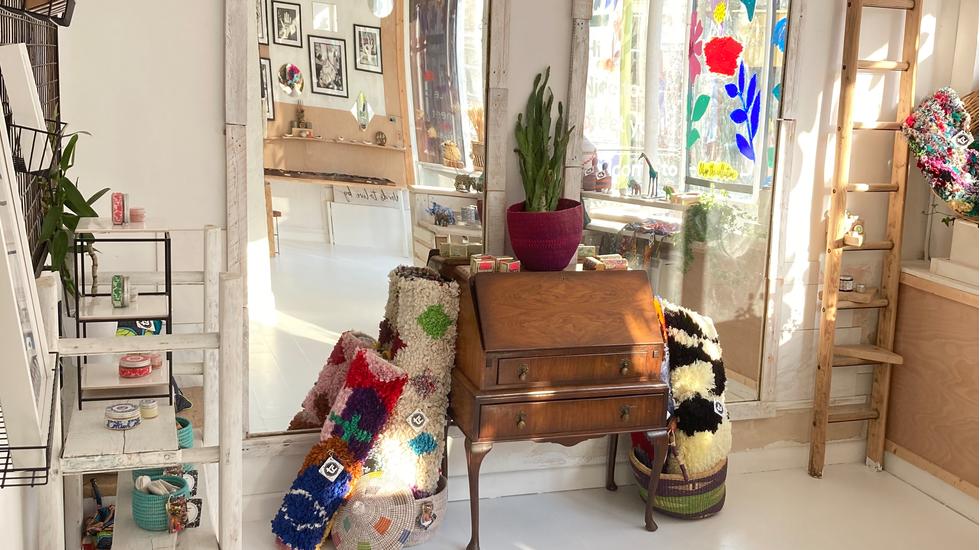 Faded Faded seaside towns are returning to the fore as young creatives are lured back to their roots by low rent and community spirit. Founder of Textile Candy, Morecambe's hippest homeware store, Becky Lois Burns is leading the way with her plastic-free seafront store stocked with eclectic wares gathered from craftspeople all over the world.

After on a trip to Ghana to educate herself on traditional bead-making and batik printing, Becky returned to her fast-fashion job feeling frustrated by the murky waters and lack of transparency in manufacturing.

Keen to create a design-led marketplace that supports small businesses and empowers independent artisans, the Morecambe native returned home to set up shop. Now, her store stocks woven baskets from Wolof women in Senegal, jewellery made in the mountainous villages of Malawi, sculptures built from flips flops that have washed up on the beach and handcrafted candles from eSwatini.

Here, Becky gives a shout out to her favourite date-night spots, the other independents she loves and the best place in Morecambe to watch the sunset.

Where are you from and how has that shaped your business?

I was born and raised in Morecambe before venturing further afield for work. Morecambe isn't a particularly affluent area, and because of this, there is such a strong sense of community here. When I opened a shop in Morecambe I felt the full support and excitement of the community - people I had never even met got behind me and became my business ambassadors and champions because they were so excited to see someone investing in their home.

I've spent a fair amount of time in Ghana on the west coast of Africa and can draw so many parallels between Morecambe and the seaside town of Cape Coast. Both have problems with poverty and both have a truly inspirational sense of community and creativity.

What was the inspiration behind starting Textile Candy?

I started Textile Candy as a blog after graduating from university. I was working night shifts in a textiles factory in Lancaster and needed to keep adrift of fashion/ textiles trends for prospective job interviews. I kept that going all the way through my career as a textile designer before leaving the fast fashion industry and opening my shop. I wanted to create a marketplace that was completely transparent, the polar opposite to what I had experienced working in Europe's fast-fashion industry. I wanted to champion small-scale artisans, celebrate traditional craftsmanship and promote a new type of consumerism in which products are joyfully made by happy people.

What first drew you to this neighbourhood?

Oddly the main reason I opened a shop in the neighbourhood was because of the cheap rent. I was looking for a studio space to do freelance illustration/ textile design from and renting a shop was cheaper than renting a studio. Talking about money seems to still be a bit of a taboo in the UK, but I think it's important that people know how many great opportunities there are for small businesses in the north west. My first shop was only £35 per week with no business rates - you can't get that anywhere else in the country. Plus, there are so many empty shops just waiting to be filled with creativity.

Describe the vibe of the neighbourhood…

One word: gritty. Not in the grimy sense of the word but the true grit that gives way to real creativity and grassroots community organisations. Like many Victorian seaside towns, Morecambe's "glory days" seem to be long forgotten but recently it's being regenerated and invested in. In fact, the Eden Project in Cornwall is currently developing a new site in Morecambe which is really generating a buzz in the area. Morecambe really is on the brink of something amazing and that's a really exciting thing to be part of.

Where should we go for our morning coffee?

I have a secret coffee counter in the shop because I need a 24-hour coffee fix but there are some great cafes along Morecambe Promenade. The Lighthouse Cafe and 13 The Warehouse are both great options. If you venture 10 minutes inland to Lancaster then Atkinsons is a great shout for coffee, it has two venues: one in an industrial space and one in the castle - amazing architecture!

… and a hangover breakfast?

My favourites are Journey Social which has the best French toast I've ever had and Brew which does delicious cakes.

What about somewhere for dinner with friends?

There's a great Indian place just off the promenade called Saffron, it's in a hidden basement down a side street. For nights in, try Chinese takeaway Shengs and for gourmet pub grub I would recommend checking out The Royal at Heysham.

There's a new wine bar on the promenade called Brittlestar with views across Morecambe Bay, if you go as the sun is setting it's a spectacular view. The Midland Hotel is also a great date location with great cocktail options and a fantastic afternoon tea. I love being surrounded by nature though, so sharing a bottle of wine on the beach and look across the bay to the Lake District peaks is pretty hard to beat.

Any other independents in the neighbourhood that you love to buy from?

I love heading into Lancaster and checking out Arteria, it's a boutique shop/gallery that has the most beautiful curated exhibitions. There are also a lot of really great hidden shops in the surrounding countryside, particularly a lot of fantastic farm shops. Some of my favourites to go for gifts are Yew Tree Barn, Low Sizergh Barn and Ashton Hall Garden Centre.

Any secret spots only locals know about?

Curiosity Corner is a cute café in Heysham. It's just a short walk from the beach and serves the best paninis and cakes. There's also the Butterfly House in Lancaster, one of my favourite places to visit growing up. It's an Edwardian palm house that has been turned into an exotic house for butterflies and birds.

I stock some great brands that are really leaving a positive impact on our planet, so it's difficult to choose. Here are four that I'm really passionate about:

How can we make more eco-conscious choices?

Research the ethos behind the brand you're shopping from, find out about the makers of the products, how they're made and how they are transported from maker to consumer. If you can't find out, send an email to the business encouraging them to be more transparent. Reducing the amount of single-use plastic you're buying is also a great way to become more eco-conscious. We stock some great products from Acala including; bamboo cotton buds, hemp make-up wipes and bamboo toothbrushes.

Any interiors tips for sprucing up small spaces?

Buy storage containers that look ornamental - our Senegalese nesting baskets are useful for storing things you don't want people to see but they also look fantastically decorative. Wall art is always a good option too, getting creative with your own gallery wall can work wonders in transforming a small space. Also getting furniture from Facebook marketplace to upcycle can be a really fun way to transform a space. I recently bought some Victorian school tables to turn into a workspace - with just a bit of sandpaper and some Annie Sloan chalk space, they look amazing.

Finally, what should we buy from your store?

Am I allowed to say everything? I joke, but all of the products I stock are made by small, independent artisans and social enterprises from around the world. The more I sell, the more I can invest into the amazing, impactful work they're doing. At the moment, some of my bestselling items are the hand-crafted animal candles from eSwatini and luxury matches from the UK - they make really great gifts and stocking fillers. I also have some gorgeous brass jewellery which comes from Malawi and some fantastic, recycled-paper jewellery from southern Africa.