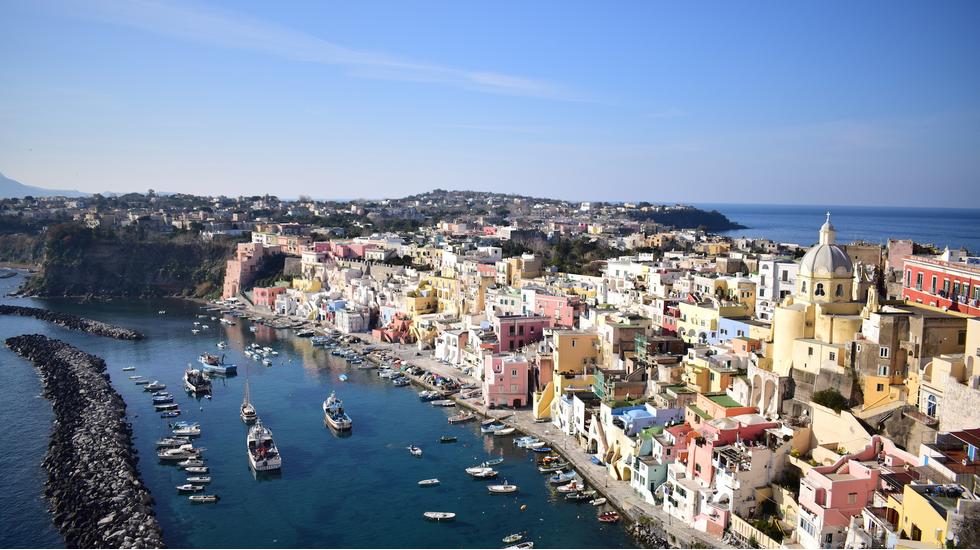 A A pastel palette sets the mood in Procida, a Mediterranean island just off the coast of Naples in southern Italy. Inspiration awaits travellers, designers, creatives and tourists alike in this multi-coloured oasis. I let the bubblegum-pink skyline overtake my senses on my half-day excursion. Procida's storyline is full of contrasts: pastel, neutral, warm, cool. After a short walk through a maze of sun-washed streets I find myself on Corricella, the harbour where faded, rainbow-brushed homes hug one another along the sapphire-blue water.

I sigh deeply. A familiar sigh that comes when I venture to a new place, not exactly knowing where I'm going until I get there, and then my heart confirms I've arrived. This time, a masterpiece lay before my eyes. Canary yellow and muted pink dominate - pear drops spring to mind - while neutral tones make their slightest debut in nooks and crannies around town.

Threaded throughout the island a poetic harmony lingers in the many contrasts. A warm, mango-splashed house plays off of its minty cool neighbour, as if planned. Below, a black-and-white cat peeps up from its nap in a traditional wooden boat painted varsity blue and tangerine orange, just in time for me to capture it. That can't have been planned. But, like the natural coordination of Procida, perhaps it was just meant to be.