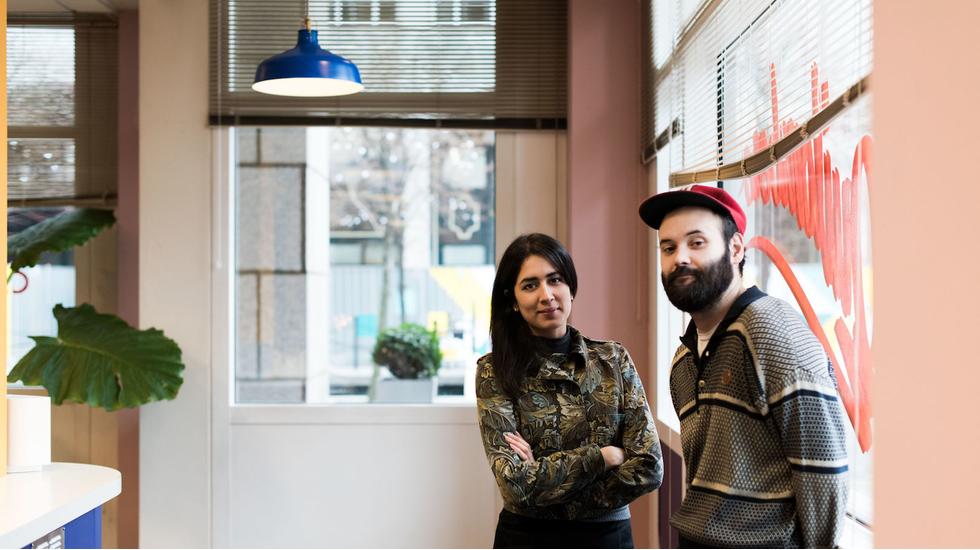 The pair behind the iconic Hackney diner Rita's are storming East India Dock with an Argentinian-Italian pop up, Quilombero, serving comfort food, cocktails and cappuccinos.

Back in 2012, Gabriel Pryce and Missy Flynn turned a fast-food pop up above a music venue into cult restaurant, Rita's, on rough-around-the-edges Mare Street in Hackney, London. Gabriel manned the kitchen, whipping up creative American comfort food like fried chicken, spicy pig's head noodles and hearty stews. Missy was in charge of getting visitors pleasantly plastered with an array of strong, colourful cocktails. The diner became a hangout for the bright young things of Hackney, who filed into the narrow space to knock back a few signature Rita's frozen margaritas and fried-chicken waffles before heading out into the night. Yet it was around this time that the gentrification of Hackney began to crank up a notch, transforming into a hotbed of stylish restaurants, fashion headquarters, overpriced housing and dizzying streams of artisanal coffee. Three years after opening its doors, Rita's announced its closure. "We were part of our own problem, really." Missy explains. "We helped change an area. But it changed too fast to keep up with."

With Rita's behind them (for now), Gabriel and Missy went in search of a new culinary undertaking. They travelled through Italy and ended up in Genoa, a north-westerly port town on the Ligurian Sea, where they began delving into the regional cuisine. "We had this long dinner at a 97-year-old nonna's house, and spent a lot of time with a local man from Argentina. That's when we began learning about Italian food in South America." Gabriel remembers.

As it turns out, Argentinian and Italian food is far more interconnected than you may think. Following the rise of fascism, Italians began emigrating to Latin America in droves during the late 19th and early 20th century. A huge number of them headed for Argentina, and brought with them an unshakeable culinary heritage that soon mingled with the local cuisine. Today, Argentina still has one of the highest populations of Italian diaspora in the world. Gabriel and Missy began researching this culinary crossover, discovering a rich and diverse world of dishes. They also discovered Lunfardo, a slang language which combines the colloquial dialect of Argentinian locals and Italian immigrants. In November, they launched Quilombero in London, a pop-up restaurant celebrating the gastronomic blend of two nations. The name means 'troublemaker' in Lunfardo.

Quilombero looks out over a canal just around the corner from East India Dock, a place that will be pretty unfamiliar to the Hackney-clinging clientele of Rita's. "I don't know this area at all. I wanted to get to know a different part of town and try out something completely new." Missy says. "Everything is new; I don't know the journey on the train, I don't know the people who live here, I don't know the buildings. It's nice." The area is fairly quiet, with just a few restaurants catering to the businessmen and women who spend their days here. Which is why Quilombero, with its sunny yellow, blue and candy-pink walls, wide-potted palms and long sharing tables, is a breath of fresh air. "We're in a somewhat walled-off area here." Gabriel says. "People have to make the journey."

The food at Quilombero is rooted in traditional Italian cooking, with the meat-heavy, heated flavours of Argentina in every recipe. We popped in for lunch and ended up sampling almost every dish on the menu, starting with ox-cheek arancini and soft, milky burrata with salsa negra, followed by a bowl of mussels swimming in a deep mortadella (delightfully fatty Italian sausage) broth. Then we moved on to a steaming plate of papardelle with seasonal kale, pumpkin and celeriac along with a charred hispi cabbage with habanero chilli, which we ate while perusing a dessert menu of baked apples with whey caramel and buttermilk panna cotta with chilli-poached pears.

What Quilombero offers is the comfort food you'd expect in a good local Italian with a dose of creative flair. There are a lot of Italian restaurants in London. And there are a great many (questionable) Argentinian steak houses. But this place celebrates the most lovable and authentic qualities of both cuisines, using local produce and with a respect for seasonal ingredients. "It's just about cooking food that we like to eat, in the style that we like to do things." Gabriel says. "Just like we did at Rita's, but with influences of Italy and South America. It's about bringing those two worlds together."

Along with the glorious main menu, Quilombero also hails one of Italy's greatest past times: aperitivo. Every Friday, Italian and South American small plates (including tostadas and empanadas) are served up beside 'house spritzes' and olive oil sours muddled up by Missy. Come dinnertime, Gabriel is partial to lobbing a few hunks of high-grade meat (such as Swaledale wing-rib) onto the outdoor grill. These are served to share with more of that divine salsa verde and Rita's famous crispy fried crushed potatoes. And while the lashings of Italian natural wine are almost impossible to bypass, Missy and Gabriel are also injecting a bit of life into the old fashioned cappuccino, a classic coffee that seems to have been lost in the tsunami of flat whites and soy lattes coursing through London. "Coffee has become so extreme and so expensive here." Missy remarks. "We had a cappuccino in Genoa and it was just absolutely delicious. Everyone stands up drinking them at the bar and chatting. I like the idea of going out for a cappuccino." "I've known what a good cappuccino is since the first time I stole the froth from the top of my mums'." Gabriel agrees. "We liked the idea of bringing back something simple."

Quilombero will grace East India Dock for six months. Which means half a year of naturally sweet cocktails, pig's head pibil tacos, oysters with brown butter, hand-rolled pasta and a whole lot of cappuccino froth brought to you by this creatively charged pair. "Having just closed Rita's, we just wanted to do a small, inventive project." Missy tells us, as we lap up the last of the mussel broth with crunchy bread. "It was hard to leave that community. We laid so many foundations there and became part of the area, so we knew that if we were going to do something new it would have to be somewhere different. Ultimately, we're just doing what we do best - a friendly restaurant with comfort food that people want to come back to." Oh, we'll be back alright.