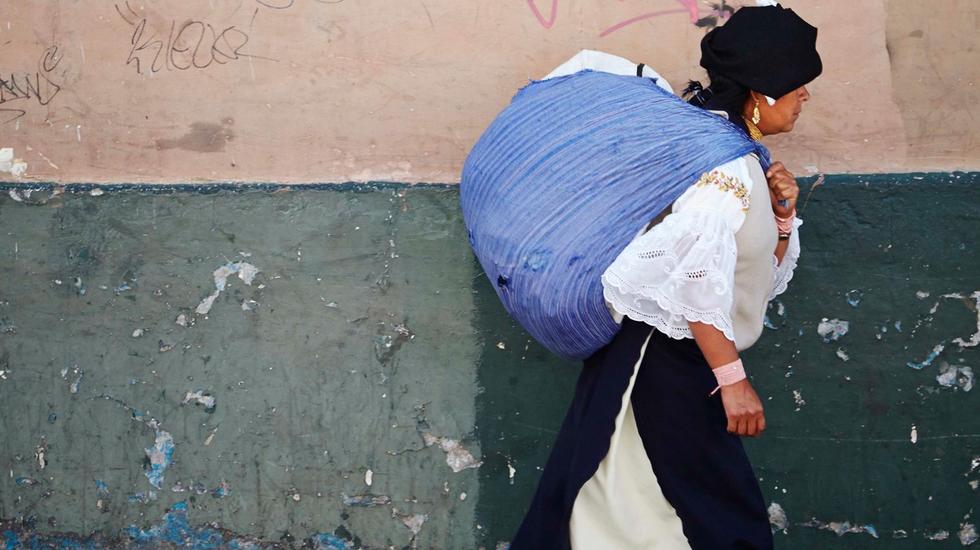 For For Volume 12 of SUITCASE photographer Claudia Legge and editor Maria Alafouzou travelled to Ecuador to explore Quito, the Galapagos islands and the Ecuadorian cloud forest. They spent several days in Quito, the highest altitude capital in the world, exploring its famous historic centre, a Unesco World Heritage Site. They climbed to the top of rickety church towers, explored local food markets, took a teleferique ride to 3,000 metres to a volcano, ate far too much ceviche and spent many hours stuck in Quito's notorious traffic. This is a selection of photographs from their journey in Quito, to see the full guide as well as a feature on the Galapagos and the Cloud forest order Volume 12, Our Planet. The introduction to our guide to Quito follows below.

Standing almost 3,000 metres above sea level, Quito - the Ecuadorian capital - is one of the highest cities in the world. Cradled in a long valley no more than three miles wide, the place is hemmed in by a wall of mountain peaks. One side offers views of the magical Old Town with its winged Maria statue, the other has volcanoes, forests and swooping birds of prey. Its sprawling and well-preserved colonial centre dates back to 1534 when the Spanish ousted the Incas as rulers.

Known for decades as a halfway house for wealthy Americans or straggly backpackers on their way between Andean treks, the Amazon and the Galápagos Islands, Quito has in recent years become a destination in its own right. As well as the mysterious Old Town - with its plazas, baroque churches and narrow passageways - barrios like the bohemian Guápulo beckon. Here, pastel houses and bars tumble down steep cobbled streets frequented by local artists and musicians, offering the magnetic appeal of a bygone era.

Quiteños are reserved and painstakingly polite: residents will greet each person they pass with a formal buenos días. But behind their mild manners lies a vibrant political tradition. A mural on the highway celebrating the dynamic women of the city's history, like independence heroine Manuela Cañizares, acts as a testament to Quito's revolutionary spirit.

Recently a Left-leaning government has prioritised social issues, so while health and education have improved immeasurably since 2007, high taxation on imported luxury goods still frustrates the locals. A bottle of Chilean wine might set you back £12; the latest iPhone £650.

The city is currently shrugging off a tradition of fusty services with thrilling new restaurants, young, creative types are hanging out at the new coffee, cycling and indie- film joints springing up in the La Floresta area, while a crop of bars and microbreweries are bringing nightlife to Old Town. That said, the best of this new crowd is limited to a handful, so foodies might not be impressed every night. Brilliant hotels are also limited and pricey, although the salon glamour of Casa Gangotena is worth the extra money.

The so-called city in the clouds is undoubtedly moving forward, but seems determined to do so at its own pace.