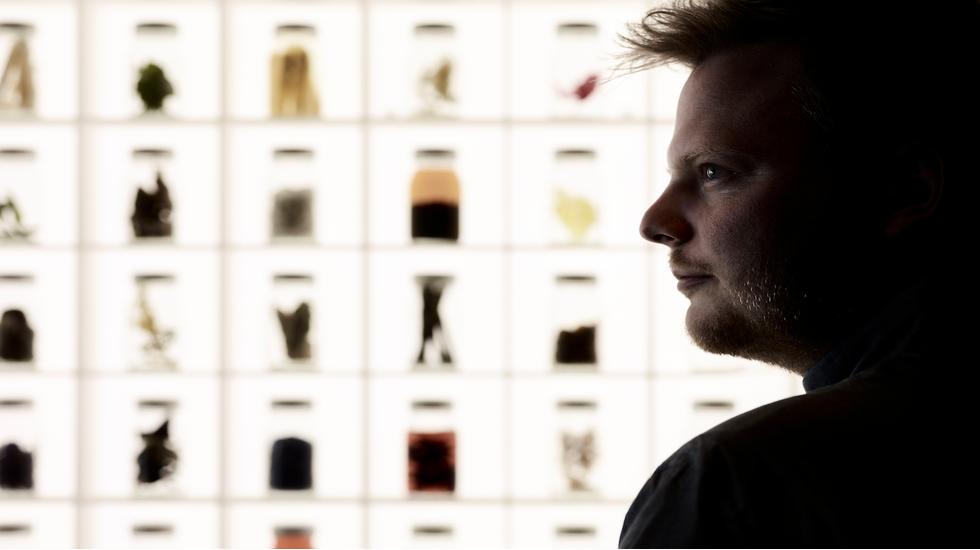 If you liked everything, then we did a poor job

A A new universe of fine dining unravels across the three cavernous storeys of a former set-building workshop used by the Royal Danish Theatre. Under Alchemist's enormous domed roof unfurls a labyrinth of conceptual dining rooms, where fantastical multimedia installations and molecular gastronomy force us to talk about the social and political issues of the day.

At its helm? Rasmus Munk, a 29-year-old Danish chef (some may say "magician"), who dreamed up the idea for his now world-famous restaurant as a schoolboy. Within seven months of opening, Alchemist was awarded two Michelin stars. Charming, modest and easy-going, Munk usually prefers to shy away from the spotlight and let his culinary experiments take centre stage instead. He lets us in on family memories, fulfilling his childhood dream and an unsuccessful culinary experiment with a cow's udder.

What inspired you to create such a concept?

Ahead of the opening of the restaurant, I found myself in a theatre. It left such a deep impression on me that it felt like I'd reached a point of no return. I invited a philosopher, a dramaturg, actors, a psychologist and I created my own "theatre" with a dome like a planetarium I'd visited as a schoolboy. I remember as a child sitting in the magical darkness among the stars and planets, wishing that if I was to ever open a restaurant, it will be a kind of fascinating planetarium. And it happened. During my final exam at culinary school, when I was 19, I was asked to write about the restaurant of my dreams. When Alchemist opened, my teacher sent me that paper. My dream had come true.

What was your objective when you opened Alchemist?

There are so many problems in the world that I wanted Alchemist to be an escape into another reality. I didn't want to repeat myself or copy an existing project. My objective was to create a product that could change people, to present them with inspiration and the ability to make discoveries.

That's quite a theatrical approach. In drama, the protagonist is often transformed throughout the production. What changes in a person, after they visit Alchemist?

I hope that after finishing their dinner, guests leave the restaurant with a feeling of catharsis from experiencing a shift in consciousness. Many often discuss global problems at our tables: climate change, hunger in third-world countries. People leave not only with the memory of a nice dinner, but also with a reflection on the present and the future.

So, you are presenting people with the freedom of thought?

Yes, we do not force our opinions onto anyone; we simply offer food for thought. For example, one of the restaurant's exhibition rooms currently focuses on the multiculturalism of New York City. It's a reminder that music, architecture, cuisine and other important things come to us through travel and the exchange of expertise. However, we don't explain anything, we just show it. Everyone can draw their own conclusions.

What is the philosophy behind your cuisine?

In our holistic approach, food is part of the world, where everything is interconnected. We strive for innovation, choosing products and methods which have not been used before. For instance, we have been working with cow's Achilles tendons and lamb lungs, both of which are usually discarded.

Which local ingredients do you prefer?

In Denmark, there are a lot of small suppliers of elderflower, ramsons and sea buckthorn. There are even people who use coffee beans and used coffee grounds to grow mushrooms - I love local stories like these. My grandma and I would often go to the farm to pick strawberries, then we would pour cream over them and eat. For me, it's the taste of childhood. I always use strawberries when they're in season.

Has it always been a smooth ride or have you faced any challenges?

I face challenges all the time. I made everyone ill because of my experiments once. I was trying to figure out what can be done with a cow's udder (butchers usually throw it away). I visited the farmer, took the udder and placed it in my car. While I was driving, the milk rose to the teats and began to spray everywhere. Drenched completely, I came to the revelation that the udder can be cut up and served so that the guests can watch the liquid, which will later become the sauce, pour out. Yet when we began the experiment, we didn't take into account the dangers of bacteria and many of us came down with an intestinal infection. One of the chefs had to be taken to hospital, and the others were out of action for a couple of weeks.

Which other chefs do you admire?

I learned from Ferran Adrià's Spanish restaurant El Bulli, which was ahead of its time and paved the way for the emergence of places like Noma. Much of the innovation in new-wave northern cuisine has been borrowed from Japan, but it is the Danish who first introduced many culinary technologies to the world. We wouldn't exist without Noma.

How has travel influenced you?

I love exploring new cultures. I have travelled through Italy and Spain a lot, though my life changed after I visited Japan. Here, they pass down knowledge so carefully, from generation to generation, perfecting their chosen profession. But this perfectionism has its downside too, and raises a serious ethical question: can the pursuit of ideal quality and pleasure justify food waste and the excessive use of plastic? I don't think so.

What are three of your favourite restaurants in Copenhagen?

Definitely Noma, where I have been 24 times. When you're there, you can really feel the international spirit, the desire to work, to achieve set goals and to produce the highest results on a daily basis. I also love going to the classic French Bistro Boheme and the restaurant Geist.

Have you recently had any fresh ideas?

We're currently working on lines of flavour which are created by each guest independently. Out of the given ingredients, you choose four. Then, based on your preferences, you choose the flavour of the additives: bitter, sweet, sour, salty. Thus, a unique dish is created.

You now have two Michelin stars. What next?

The Michelin guide was never my goal, although it is nice to be recognised, of course. I would like to change the gastronomic landscape, see how far I can go with my experiments while maintaining a holistic approach and integrity of the cuisine. We are also taking part in the development of an open education project for children about food, in partnership with a planetarium. It should be finished in a couple of years. The Novo Nordisk Foundation has provided us with almost 2.5 million Danish kroner [£300,000] for the creation of Alchemists Explore. The point of the project is to merge the history of food, the traditions of various countries, technology and live streams with our cuisine.

Anton Krasilnikov is a restaurateur and co-founder of Go To Star.