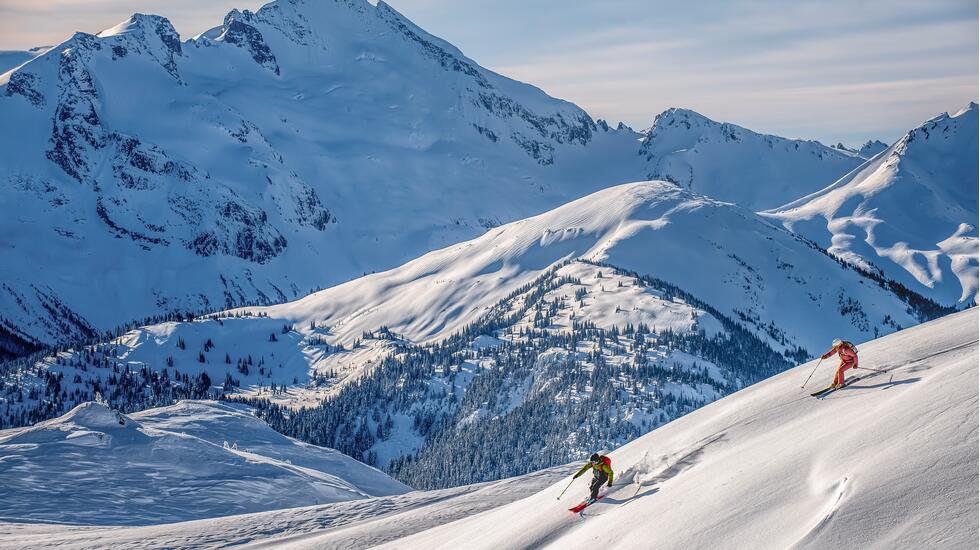 Whistler Whistler is proof that if at first you don't succeed, try again. Cherry-picked to be a ski resort by a group of Vancouver businessmen intent on seeing Canada host the 1968 Winter Olympics, Whistler lost out to Grenoble, France. It's now the largest ski resort in North America and, in 2010, more than 40 years after the original bid, was finally chosen to host the Winter Olympic and Paralympic Games. We call that a serious comeback.

Constantly evolving and expanding, the twin mountains of Whistler and Blackcomb encompass a whopping 200 ski trails (from beginner to expert), 16 valleys and three glaciers. It's a veritable smorgasbord for skiers and snowboarders - and home to plenty of other winter sports besides.

Named after the whistling marmots that live in the area, Whistler is a place where nothing stands still. There's a festival line-up that includes a Pride parade strapped onto skis, a chocolate-box selection of hotels and the record-breaking PEAK 2 PEAK gondola joining the two mountains. Constantly cutting-edge, Whistler is as fresh as its abundant snowfall. And with cosmopolitan Vancouver just a snowball's throw away, a ski holiday in Whistler takes some beating.

Canadian highs: why we're skiing in Whistler this winter

With its whipped-cream mountain peaks, snow-covered turreted hotels plucked from the pages of a fairy tale and thick pine forests that wouldn't look out of place in a Narnia adaptation, Whistler's winter style is "dressed to impress". Nestled between the Coast Mountains and the West Coast Wilderness, it manages to look rugged and like a cake delicately sculpted from royal icing all at once.

Sea and summits are a rare combination, but with Whistler being just two hours from Vancouver, along the world-famous Sea to Sky Highway, you can be by the ocean in the morning and in the mountains by the early afternoon. And we can't deny the perks of going from passport control to the piste in less than two hours. Ditch the car: Whistler is easy to reach by public transport and the village is pedestrianised.

Move over Endless Summer; we want an endless winter, and that's exactly what Whistler offers. If you cross off the days until you can hit the pistes - rather than counting down to Christmas - we have good news: the season here starts as early as November and continue until May. Indeed, while many ski resorts struggle to get going before late December, in Whistler, November is often the month with the highest snowfall.

If you're anything like us, decision-making leaves you in a panic. What should I wear today? Which dish should I order from the menu? Which mountain should I ski from today? In Whistler, it's all linked, so there's no indecision over which peak to head for. The PEAK 2 PEAK Gondola, joining Blackcomb Mountain and Whistler Mountain, spans 3km and runs 436m above the ground. On completion, the lift broke world records including the highest lift of its kind at 436m/1,427ft above the valley floor. At the risk of stating the obvious, the views from the gondola are rather special.

There's Whistler Pride and Ski Festival, one of the biggest queer-focused ski weeks globally; the World Ski and Snowboard Festival and an epic après scene to (ski) boot… We could go on. Whistler's calendar is so varied, you'll struggle to find time to hit the slopes. Even if your trip doesn't align with one of the many festivals, the weekly Fire and Ice show (Sunday evenings), with fireworks, fire spinners and skiers jumping through flaming rings, provides the sort of atmosphere that even George R. R. Martin would have struggled to cook up.

Armies of hungry skiers march (or rather glide) on their stomachs. With a melting pot of cultures and nationalities, it's little surprise that Canada has so staunchly embraced world cuisine, and Whistler is no exception. There's fine dining, finger food and an après scene that'll take you from post-piste schnapps to feasts of fondue. We're particularly keen on the farm-to-fork approach taken by many of the restaurants, which source their food as locally as possible.

Sure, the skiing and snowboarding are world-class, but variety being the spice of life, it's hard to ignore the array of other activities Whistler offers, from bungee jumping to bobsleighing and snowshoeing to snowmobiling. It's little wonder Whistler keeps its repeat clientele. The outdoors is a way of life here, and it shows - linger a little longer to try it all. Our favourite? Ziplining over the icing-sugar slopes.

Stop trying to drag the inexperienced skier in your family down a black run, Whistler has options. 35% of the runs are green (beginners), with almost exactly the same percentage suitable for intermediate and advanced skiers. Add in family zones and terrain parks and everyone's happy. It's a different story at après, where all ages rub shoulders.

We may be a nation known for our commitment to queueing, but that doesn't mean we take pleasure in it. Whistler has 38 ski lifts that can transport over 65,000 skiers per hour, giving us more time on the slopes. Two new lifts will open this year - the Big Red Express chairlift and the Creekside Gondola. More time skiing and less time standing? Yes, please.

Fascinating museums and galleries aren't what you usually associate with a ski town, but Whistler has got them. There are contemporary and fine art galleries - the Audain Art Gallery is a must for any itinerary - and a museum that explores Whistler's skiing history, but our favourite is the Squamish Lil'wat Cultural Centre, a First Nations museum, with exhibits and art installations that showcase indigenous culture.

Slide into those salopettes and buckle up your ski boots; we're hitting the white stuff in Whistler. With favourable exchange rates, you'll get more bang for your buck so start planning your Canadian escape at whistler.com/winter