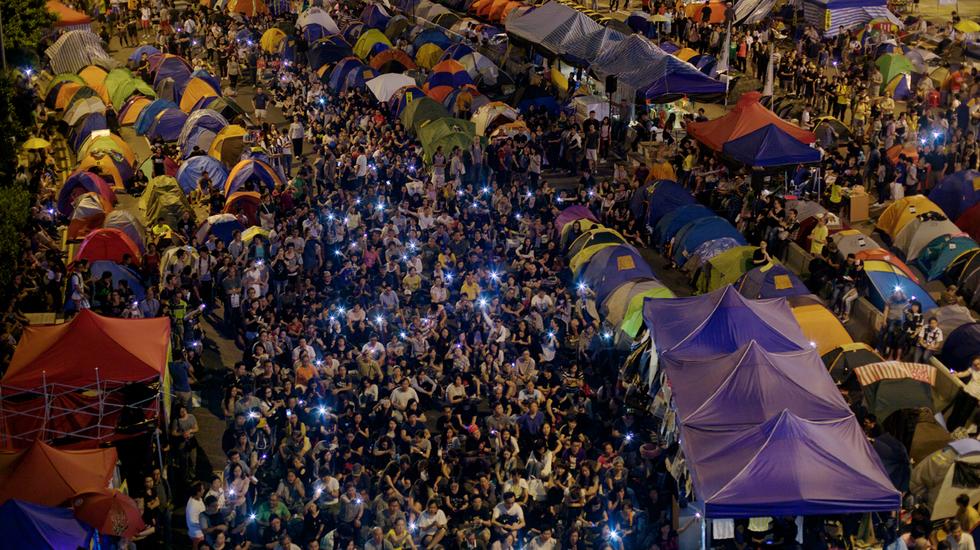 On On September 28, 2014 the people of Hong Kong witnessed an event that would forever change the city's social and political landscape. After almost two years of planning and discussions, tens of thousands of people gathered in the central district of Admiralty to start what would be a two-and-a-half month peaceful occupation of major business districts and thoroughfares in downtown Hong Kong. The movement, initially known as 'Occupy Central with Love and Peace,' was led by a Hong Kong University law professor who was soon joined by other academics and major student organisations from all over the city. The protest was initially ignited by the Chinese government's decision to pre-select nominees for the upcoming election of Hong Kong's chief executive in 2017, but later evolved into the people's expression of general discontent with the current Hong Kong government as well as the increasing influence of China. Hong Kong, which was a British colony until the city's hand-over to the People's Republic of China in 1997, is now a Special Administrative Region which enjoys almost the same standard of freedom known to people in the UK.

Just a few hours after the 'Occupy Central' movement officially started in the early morning of September 28, Hong Kong police fired 87 rounds of tear gas and used batons as well as large amounts of pepper spray in an attempt to disperse the crowds. As a defence, the protesters turned their umbrellas (which are a common protection against the sun) into shields against the repeated attacks by the police. From this point on, the 'Occupy Central' movement became known as the 'Umbrella Revolution'.

Even though the protests (at least initially) sparked major support from students, academics and coverage by the international media, proposed talks between representatives of the protest and Hong Kong/ Beijing have been mostly ignored or turned down by executives of both governments. Ultimately, after two-and-a-half months of peaceful occupation, all protest sites were cleared by the Hong Kong police in early December, ending in hundreds of arrests and injured people. 'Occupy Central,' as well as all major affiliated organisations, announced the continuation of protests in 2015.