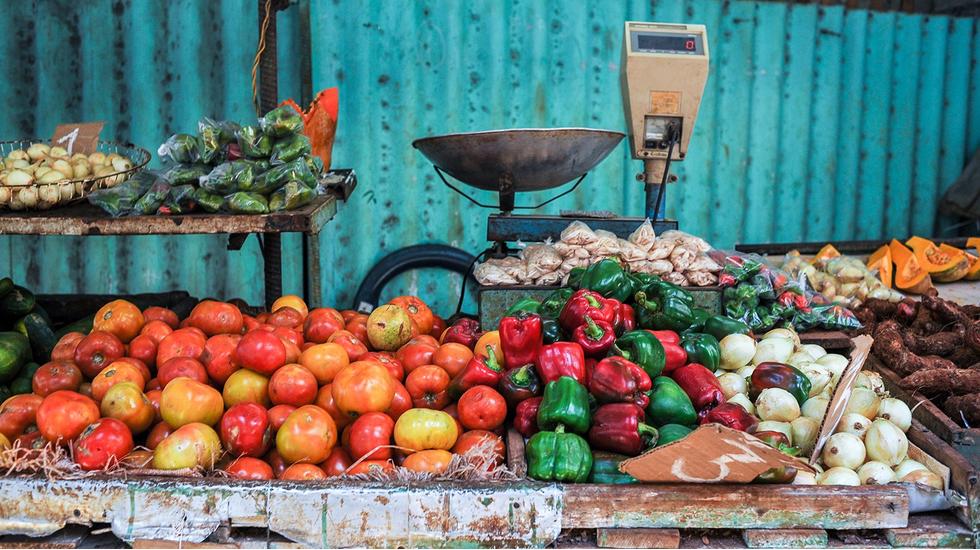 Vegan travellers - or anyone for that matter - should go armed with snacks aplenty. Cross-country journeys are long and supermarkets are few and far between. Energy bars, nuts and the like are ideal, as are long-life cartons of non-dairy milk if you like a splash with coffee.

Cuban Cuban cuisine is much more than rice, rum and beans. As the country caters to tourists and embraces global food trends, the scarcity of imports and abundance of local produce mean that vegan fare is among Cuba's best gastronomic offerings.

Welcome to Cuba: land of rice, rum and beans. More and more tourists are flocking to this colourful and mysterious country that promises decaying buildings, beautiful people and dancing - lots of it. Yet despite its top-grade rum and the infinite cocktails that are shaken and stirred to perfection, Cuba's culinary landscape is readily snubbed.

The Caribbean diet primarily consists of tropical fruit, starchy vegetables, rice, beans and meat, and in Cuba the diet changes according to what's in season as well as the availability of imported goods. Cuba trades primarily with communist countries such as China and Venezuela and, as a result, resources remain limited and meals are often cobbled together with indigenous ingredients such as yucca, maize, sweet potatoes, bananas, eggs, meat, coffee and pulses. There's a lot of dried goods and things in tins.

Nevertheless, despite continuous food shortages across the island, restaurateurs and chefs are creating deliciously innovative dishes - some of which are plant-based - proving that Cuban fare can be a culinary attraction in its own right. What's especially impressive is Cubans' ability to stay on top of global food trends and create menus that are at once dynamic and flavoursome.

When it comes to plant-based cuisine there are plenty of options, and vegans will no doubt be relieved to hear that it's more than just rice and beans. Major cities and large towns - including Havana, Trinidad and Viñales - have many international and traditional Cuban restaurants with menus clearly labelling whether the dishes are suitable for the meat-free among us.

International restaurants are tailored to tourists' tastes (and budgets), so their dishes tend to be more experimental and in-keeping with global food trends. Chefs in such kitchens can often afford to source imported ingredients, such as speciality cheeses and wines. Tucked away in Havana's trendy student neighbourhood of Vedado, Mediterraneo Habana is a restaurant doing just that, making the most of Italian ingredients such as ricotta, mozzarella and oregano. For under 5 CUC (£3.90) for a stone-baked marinara pizza, vegans can enjoy some of the best slices outside of Naples here.

Al Pirata in Old Havana (Habana Vieja) is one of the few restaurants in the capital with a menu that is 50 per cent vegan and driven by a sustainable, locally sourced ethos. "Even the hot sauce is made by us and is 100 per cent vegan," says head chef, Guillermo. When I ask him if he'll share the recipe, he hesitates, before whispering, "chilli, papaya, basil, olive oil and water. That's it."

Is veganism sustainable in a country with a limited supply of imported ingredients? "It's easy," adds Guillermo. "The Caribbean diet is largely fruit and vegetables anyway, so it's cheaper for us." Al Pirata is in its infancy. Before it became a restaurant, it sold ice cream and smoothies, but just after just four months with an expanded menu, the business is thriving.

What's available: Caribbean dishes (which happen to be vegan)

Cubans are known for their resourcefulness, a byproduct of the US trade embargo. This dictates what's on the menu - if there's a chicken shortage, then there's no chicken for dinner. Due to the Venezuelan crisis, food shortages are happening more and more frequently. It isn't uncommon to see Cubans queuing up in 40-degree heat to access rationed goods. Restaurants are quick to respond to such scarcities and will hastily replace ingredients with substitutes. Ask for fried potatoes and you may receive fried malanga - a similar root vegetable - in its place.

For breakfast, there is an endless supply of pineapple, coconut, bananas, mango, papaya and guava, and you can buy these from merchants in the street. Most restaurants serve a hearty breakfast of bread, fresh fruit juice, eggs (vegans: omit the egg) and coffee, which is deliciously thick and robust, all for less than 5 CUC.

In traditional Cuban restaurants, vegans and vegetarians can count on a few staple dishes that are usually safe options. Try the various soups on offer - flavours often include black bean and pumpkin - although check they don't contain beef or pork stock. Incidentally vegan sides include sweet potato, fruit salad, sautéed vegetables, fried green bananas and plantain - a favourite for its for gooey, melt-in-your-mouth feel. If ordering black beans and rice (or "Moors and Christians" as it's commonly known), do ask if it contains meat - pieces of beef or pork and broth are sometimes thrown into the mix.

Top six vegan dishes (and where to enjoy them)

A riff on the traditional Cuban cheese-and-ham sandwich, this is a winning veg-powered concoction of garlicky sautéed spinach, black olives and raisins served in fresh sourdough. Al Pirata also does a delicious vegan burger with a lentil-and-bean patty – wash it down with mouthwatering smoothies and cocktails that are big enough for two.

Technically two dishes, but they are worth loosening the belt. Battered aubergine wheels are coated with chickpea flour and fried to crisp perfection. The value-for-money vegetable curry uses seasonal vegetables – mine featured okra, pumpkin, peppers and malanga – in a creamy coconut base. Portions are generous and the ambience trendy and low-key.

Simple, cheap and quite possibly the best meal you’ll have in Cuba. The soup contains delicate pieces of sweet pumpkin that melt in the mouth. Sit on the balcony and catch the sunset serenaded by the sound of rumba from the nearby Casa de la Música, one of Cuba’s best music venues.

This restaurant is set within one of the oldest (18th century) buildings in Trinidad and was home to the Mayor of Trinidad for several years. Its samosas are pricey by Cuban standards, but well worth it.

It may sound odd, but a fried relative of the banana pairs fantastically with hummus. Tostones are twice-fried plantains pounded flat to create a golden chip. While at Tareco’s Bar, try the vegetable tacos, fried yucca and stuffed sweet peppers – they’re deliciously affordable.

The perennial queue outside El Olivo is a hallmark of Viñales best-loved restaurant. The Italian-Cuban eatery uses ingredients from its organic farm, just 5km from the centre of neighbourhood and open to visitors. Vegan options include paella, grilled vegetables and salads, but the creamy pumpkin soup was served with a deep-fried aubergine crouton is the stand-out plant-based dish.

Ask about the menu

If you're not sure whether something is vegan, always ask; menus don't always list the ingredients. Don't speak Spanish? Teach yourself the necessary vocabulary to get by, such as "sin carne y lácteos" which translates as "without meat and dairy". Pieces of meat and stock are known to slip into dishes you'd think would be suited for herbivores. The Vegan Society's passport comes in handy here - a multilingual phrasebook explains what a vegan is in 79 languages across the globe.

Download AlaMesa and you won't be sorry. The offline app enables you to read up-to-date restaurant reviews and discover restaurants, cafes and bars without having to use the internet. You can even view some of the menus ahead of time. The app covers Havana, Trinidad, Varadero and many other popular Cuban destinations.

Go with an open mind

Remember that caterers and hosts are providing what they can with the ingredients available to them. Cubans might not be known for their cuisine, but with veganism on the rise, restaurants are responding in a way that's creative and inventive - and that's something to be celebrated.