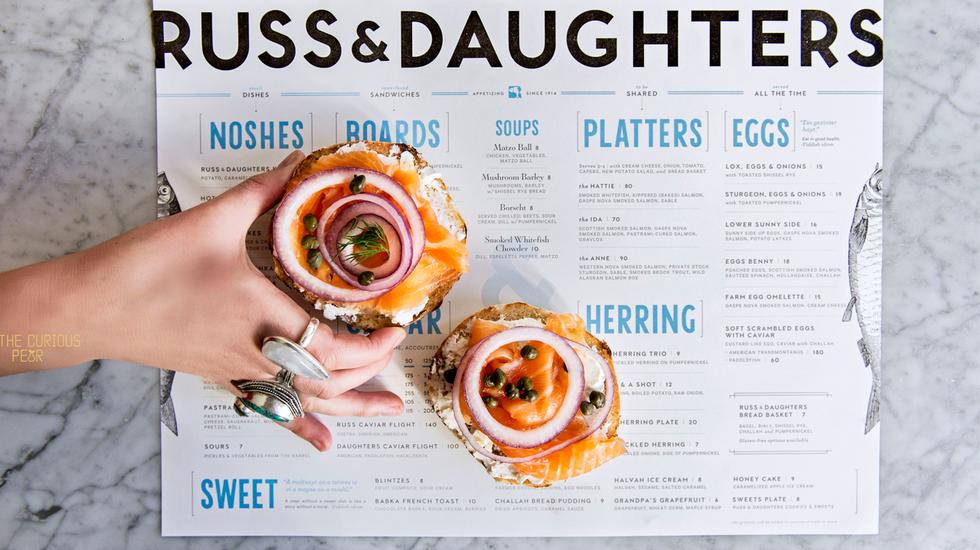 At At the turn of the century, Manhattan's Lower East Side was one of the most densely populated districts in the world, and Russ & Daughters opened along with hundreds of other spots selling traditional Jewish foods to the many immigrants living in the area. As the years rolled by and new food industries came and went, Russ & Daughters remained one of the few original sellers of Jewish foods to survive the changing times. Through wars, democratic change, and a restless food industry, Russ & Daughters has remained a fixed entity on New York's culinary landscape.

The food is a conduit for memory.

Last year, Russ & Daughters celebrated its 100th anniversary by opening a brand new café on Orchard Street, only a few blocks away from the original store on E Houston Street that opened in 1914.

This year, The Sturgeon Queens, a feature-length documentary telling the story of "100 years, 4 generations, 1,800,000 pounds of pickled herring" went into production. Narrated by old costumers with interviews from the store's loyal (and sometimes celebrity) customers, the film illustrates the scope of Russ & Daughters' following.

"On any given day, you can have A-listers next to old ladies with their shopping carts, next to tourists," Niki Russ Federman, a fourth generation Russ, tells us. "There's a very democratic feel to the place."

The new Russ & Daughters café allows first-time visitors and loyal followers alike to sit at a table and enjoy the traditional offerings of the store alongside new menu-items like cocktails, sharing platters and brunch dishes. The menu reads like an edible history of Jewish culture, from pillowy knishes and chopped liver to matzo ball soup and luxurious caviars, all the way to their famous smoked fish and herring.

"People come to Russ & Daughters because the food and the place is so charged with history,"Josh Russ Tupper, also a fourth generation Russ, says. 'The food is a conduit for memory."

Last year, the Russ & Daughters store was awarded an Official Resolution by the New York State Senate, marking its hundred years serving the city's people. It has long been recognised as a staple of New York's diverse culture, and serves the same food now as it did when it first opened in 1914. "For us, it's not about doing things differently," Niki explains, "It's about doing things traditionally, and the best. We want our foods to taste the same way to customers as they did when they were a little kid, eating them in their grandmother's house."

We sat down with cousins Niki and Josh in a shiny new booth at Russ & Daughters café underneath a black and white photograph of the store taken just after WWII, a prevalent mark of the brand's place in time. The two fourth generation owners of the company explained just what it is that makes the Russ & Daughters name as celebrated in New York's food history as it is today.

Tell us how the R&D Café came about…

JOSH RUSS TUPPER: We would get tens of calls every day asking for reservations at the store. We sat down and began thinking about what we should be offering our customers, and wanted to give people a place to sit down and enjoy the food. We started looking at spaces three years ago and began refining the ideas. NIKI RUSS FEDERMAN: The café was a natural extension for us. So much of this food is about coming together with groups of people, friends, family, and visitors from out of town. And as amazing as the original store is, we just felt that there was a missing piece.

Was it always going to be on the Lower East Side?

N: We came full circle with that. The Lower East Side is one of the most important geographical neighbourhoods in the US, because so many Americans can trace their own immigrant histories back to this small zone. At the turn of the century, this area was the most highly populated in the world! There is so much memory and history on these streets, and Russ & Daughters has been a part of that history for a hundred years.

J: We had other options of where to place the café, but ultimately we realised that we had to do it on the Lower East Side, it just goes hand in hand with the brand. The more that the city and this neighbourhood changes, it loses a lot of its historical character, so we felt obligated to be one of those places that provides continuity.

How do you strike a balance between sticking to tradition and keeping things fresh when it comes to the café?

N: That's just the crux of everything we do.

J: It's always on our minds, but at the same time it's easier for us because the essence of our business is a store that has been in New York for so many years. We constantly go back to the store and think "this is what defines us. This is the soul of Russ & Daughters". So I think as long as we keep that as a reference point, then the connection to the past will remain. This connection is very prevalent in our minds inside the café but at the same time, it's about bridging the gap between the present and the future. It's probably our biggest challenge.

N: It's a very fine line. We're not a museum, we didn't want to fall into the kitschy nostalgia of trying to recreate the past or make the café look old. We didn't feel that we needed to do that, because we are old. It's in the name, the food, the smells; the history is tied up with the brand through time. Equally, we didn't want to make the café so new and chic that it alienated people. We wanted the past and the present to co-exist in here.

Have you noticed this kind of food becoming more fashionable recently?

J: There are a lot of people getting into the Jewish food world. We've certainly seen a change in our customers. Twenty years ago, the people coming to the store were all a lot older. I think when Niki and I came in, and people saw younger faces behind the business, the customer age average dropped massively. We now have all of these young customers, and young people wanting to start their own business of this kind.

What do you love most about what you do?

J: Carrying the torch of a small business, which is something we're losing in our society. I love making my grandmother proud of the business, being able to see her reaction to what we're doing and feel her excitement. She's 93-years-old now, and was in the Russ & Daughters business because she had to be, not because she wanted to be. The daughters of our great-grandfather weren't given a lot of choice. College was not an option, who they married was monitored by the men of the family. Into her eighties, our grandmother was saying "I'm still trying to figure out what I want to do when I grow up". Seeing how she looks at the business now sort of redeems a bit of that resentment and makes her feel good about everything she did for the business. It was her whole life.

N: For me, I love understanding the impact that Russ & Daughters has on other people. Every day there is some reminder that the food is a vehicle for this whole other experience. For example, last week there was a marriage proposal in the store! This guy popped the question in the store on a busy Saturday. And when I was talking to the couple afterwards he told me: "This is her favourite place in the world, I couldn't think of anywhere better to do it." Everyone has a story in here, and everyone shares that story. That keeps me so motivated.

Where do you like to eat when you're not at Russ & Daughters?

N: I love Mission Chinese. Contra (right across the street from the café), is also excellent. It's a prix-fixe menu of creative American food and the menu changes every day, cooked by two young chefs. They're so talented. It's the best deal in town!

J: I don't like giving out my spots…(laughs) Il Buco is one of my favourites. Estela, which is hard to get into but very worth it! El Rey, near here, is a very unassuming but delicious spot. I stick to very few regular places.

What do you like most about living in New York?

N: It's really about the people. And Russ & Daughters connects us to all of those people. It's endlessly interesting, fascinating and fun.

J: New York has this incredible diversity of people, with a huge diversity of interests. There's something for everyone. There's this crazy mix of personalities in the air! It's a huge place filled with anything you could ever want, and yet it's a small town where you run into people you know on the street all the time. As long as you stay away from Times Square…