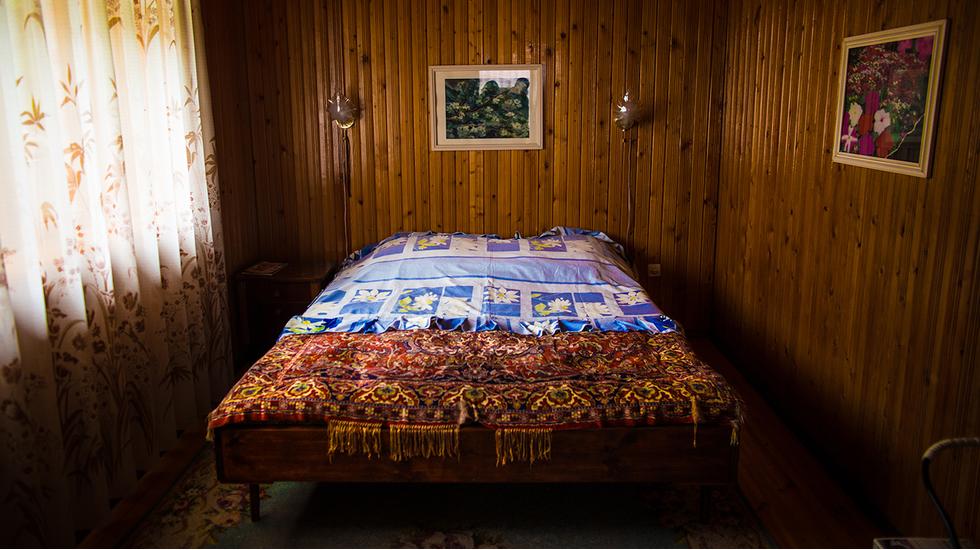 I I journeyed through Russia to discover its history, literature and people. Friends and family were confused as to why I'd chosen to live a year in such a cold (in both senses) and purportedly antagonistic country. I wasn't going to let them deter me - and it was better than I had imagined. Western media portrays Russia as a bully but, politics aside, there are many delights to be found across this wild landscape.

While I was met with a stern greeting from time to time, what really came through was a strong sense of loyalty and passion for life - even in the face of hardship. As a way to break the ice, I would speak English loudly in the street. Before long, several friendly faces would appear around me, desperate to practise their English and tell me about their country. Most Russians don't understand that the British greeting: "How are you?" means "Hello." When Russians ask this question they expect an honest response and, in turn, they will give you full report of their personal lives.

I discovered a bittersweet world of colours, dancing, fantasies and music. Traditional caucus dancing is joined by salsa in the street. Feminism is on the rise with women becoming more opinionated and ambitious than ever before. The mix of grand communist buildings standing next to pastel-coloured architecture and cosmopolitan boutiques makes for an interesting juxtaposition that highlights the changing faces of a "closed" Russia. Summers are spent in large parks full of people skating or playing ping-pong, while winters are about ice-skating and exchanging darkly humorous tales while knocking back vodka in a Russian public bath known as the "banya". There you lie stark naked in a heated room, surrounded by other women, taking turns to hit each other with hazel-leaf branches - it's supposed to be good for blood circulation.

Before travelling to Belarus, I was warned that, as the last "dictatorship" remaining in Europe, I would experience hostility towards westerners and a cold, hard, post-Soviet attitude. But as I had already spent so much time in Russia, I was anaesthetised to this repetitive narrative - and ignored it. I called up an old Belarusian friend to see if he'd have me to stay. I was greeted with a surprised: "You want to visit MY country?" followed by a cheerful and excited: "Wow, please come!"

Previously, a visit to Belarus had been too expensive but a newly introduced free five-day visa to encourage more tourism presented the perfect opportunity to go. So, there I was in Belarus, a land known for little more than a) being the greenest country in Europe - 50% is covered by forests and lakes and b) the last remaining European country to have the death penalty.

While I was received warmly by all the locals I met, what struck me was how few people there were about. Even at midday on a Saturday in the centre of the capital, Minsk, only a couple of people were to be seen for miles around. Instead, I hung out with the various imposing Lenin statues that were dotted about the town. It felt as if there were a curfew, or that there was some party happening elsewhere, to which I wasn't invited.

Apparently this is the norm in Belarus - with under nine million people living there it feels like barely a thousand. There is a darkness still looming over Minsk, which was 80% obliterated during the Second World War, in a country that lost over a quarter of its population. In addition, the residue of paranoia was palpable. It was clear that Belarus had a dark history that could be temporarily forgotten when exploring picturesque streets or chatting to charming locals.

To escape the weird sensation of being one of the only tourists in the whole of Minsk, I decided to drive into the heart of the countryside accompanied by my friend, who kept me entertained en route by sharing his love for terrible Russian pop music and Nineties Euro trash. It was so green, the water pumped from deep underground wells so pure, the birds so full of song, that it felt like I had stepped into Sleeping Beauty's forest. We passed hundreds of churches, and my companion explained that while most people were religious there were occasionally those who had their suspicions of the Church. Much to my amusement, he then opened his wallet to show me his well-kept picture of a holy saint folded neatly next to a condom: "Got to be safe," he giggled. And I realised that, in Belarus, I did feel very safe.