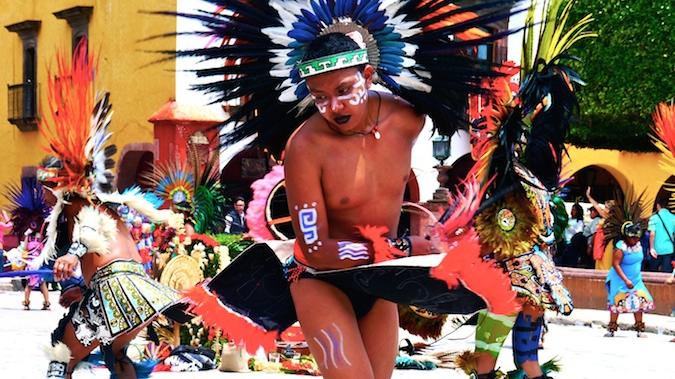 As As the arid Mexican sun began to sink below the valley's edge, pinpricks of light illuminated the town from below and I took another satisfied sip from my tamarind margarita. After a three-hour drive from Mexico City and a stumbling walk up uneven cobblestones, I had made it to the Rosewood Hotel in San Miguel de Allende just in time for sunset.

San Miguel de Allende is one of those towns which you struggle to prefer by night or by day; by night, an evening stroll leads you past its numerous boutique hotels, sumptuous restaurants and host of chic stores along brightly lit streets. By day, sunlight illuminates the vermillion reds, ochres and cobalts of colonial homes, and the tranquility of leafy courtyards can be felt by peeking through cracks in old wooden gates. The architecture is an intricate blend of Spanish tradition, Neo-Gothic pink limestone, and ornate baroque.

A city like this invites you walk a pace slower. Its sleepy backstreets don't do much to betray the fact that San Miguel de Allende was once a hotbed of dissent for Mexican revolutionaries. It was here that crouched over splintery tables covered in glasses of pulque liquor, General Ignacio Allende began conspiring against Spanish rule. Founded in 1542, the village originally sprung up as a commerce and trade route during Mexico's silver boom. Today the city has been carefully manicured (some may say perhaps a little too carefully) into a cosmopolitan and charming UNESCO world heritage site.

San Miguel has a strong art scene (the first art school in Latin America was founded here): take Fabrica la Aurora, an art and design centre set inside a converted textile factory a 10 minute walk south of the city. Here, many high-end galleries fill spaces with Mexican and international talent alongside stores selling artesanías, antiques, artwork, furniture and clothing. I found myself promising that once I had settled into a home in Mexico City I would be back, manning the wheel of a pickup truck and filling my small apartment downtown with Mexican textiles and furniture. For now though, I am content with my margarita and the setting sun.