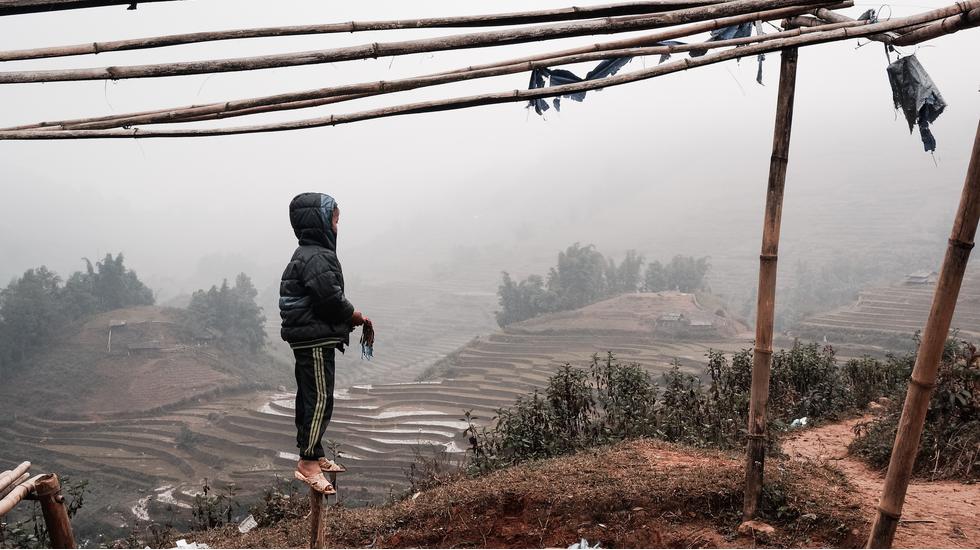 Following Following a journey to the far north of Vietnam on a rattling sleeper train, an ethereal environment unveiled new surroundings as we arrived in the mountainous town of Sa Pa.

A far cry from the frenetic capital of Hanoi, tropical plants peeked out of the mist; traditional indigo-coloured dresses were illuminated against the white background; small terraced farms floated in a sea of clouds and hilltop villages were transformed into secluded worlds. A warm glow emanated from bustling cafés and restaurants, tinting the mist that snaked through the narrow streets. A gentle hum of cheers could be heard as an unexpected game of volleyball began in the central square. The towering church, painted white, faded into the sky above; below, vibrant hues of women and children's clothing contrasted against the steps they sat on.

Trekking out of town, a group of women joined us. Made up of young mothers and grandmothers, their sturdy, practised footing helped us to avoid slipping on the damp, muddy ground as they regaled us with stories of living in this mystical land.

On the path down to the village of Cat Cat, bamboo hung overhead, enclosing the market stalls below. Water wheels sat dormant along a wide running stream, as the rhythmic vibrations of local music seeped out of a building on the riverbank.

It was on our last day that, while many of the peaks remained a fragment of our imagination thanks to hanging cloud, they momentarily parted to reveal an enchanting vista of rice terraces stepping down into the valley below.