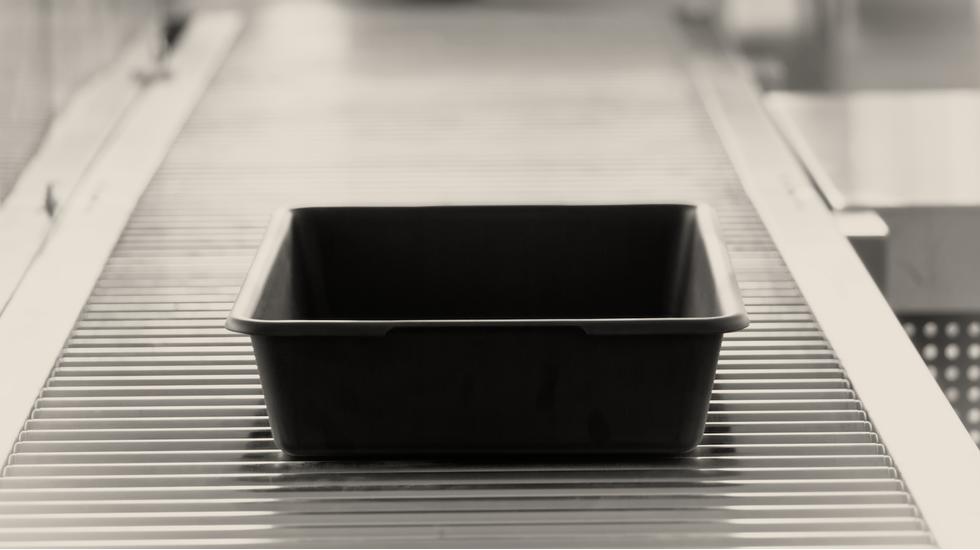 A A few years ago I was detained at Charles de Gaulle Airport, told to open my carry-on, and asked to explain why I was attempting to transport several rounds of ammunition on a transatlantic flight. The items in question were spiked and studded Balmain belts, being brought from Paris to New York to be worn by Kanye West in his upcoming Saturday Night Live performance. The belts were harmless, yet to the penetrating lens of an X-ray machine, they did bear a menacing resemblance to bandoleers of ammunition.

It was silly folderol and resolved quickly, but it was also impossible to deny a sense that people's possessions take on potential or latent violence at an airport. Indeed stilettos, sandals, sabotines, and shoulder pads all trace their origins to the battlefield. Even in civilian garments, there lies a tension between fashion's innocuous capacity to express a personality and its potential to endanger other passengers.

In the buttoned-down and skeptical zone of airport security, some of today's flashier fancies of fashion can raise eyebrows, questions or alarm. Fashion in transit submits to a specific type of inspection: it is less a quantification of the value and legality of your goods (as is the case in clearing customs) than it is a qualification of your threat to others around you. Richard Reid, his black suede high-top basketball sneakers and his monstrous plot to blow up an airliner in 2001 are responsible for the enduring charade of dressing and undressing as your body is scanned barefoot - but with clothes on.

Taz Arnold, an artist and hip-hop producer, made headlines in 2011 when his own footwear, spiked Christian Louboutin 'Rollerboy' slippers, was pulled aside for further inspection at Washington's Dulles Airport. Arnold tweeted, "why did airport security TSA try and jAck my 'louboutin$' these are weApon$! wtf?" along with a picture of the shoes being handled by at least three security agents. Though the shoes were eventually cleared to fly, fashion is riddled with wry ironies and stylised allusions to violence that regularly cause concern in transit. One traveller's Alexander McQueen knuckle-duster skull clutch was confiscated as a weapon at Chicago's O'Hare Airport, and while Louboutin's new line of solid lipsticks in metal bullet-shaped cases might not breach a person's allotment of carry-on liquids, they've been taken away by security agents who take issue with cartridges of 'Diva' and 'Let Me Tell You.'

Those who own a Cartier 'Love' bracelet can also expect a thorough patdown after their manacle-bangle sets off the airport metal detector. The bauble, which requires a special gold screwdriver to remove, was allegedly inspired by the medieval practice of knights locking their fair maidens in chastity belts as they rode off to war. Small airports that handle big name celebrities, like Aspen, are familiar enough with the item to turn a blind eye. Indeed, Frédéric de Narp, the former president and CEO of Cartier North America, observed that Paris X-ray screeners sometimes remark, "Let her through - she has a Love bracelet on."

Though contemporary contretemps between haughty aesthetes and screening personnel are often humorous in their false opposition between style and security, some of these misunderstandings may indicate broader trends in our culture: the pervasiveness of surveillance that we undergo daily, the constant insinuations of violence that surround us and the paradox that these references to conflict flourish in an already tense climate of security anxiety.

While camouflage featured in recent collections such as Dries Van Noten, Valentino, Kenzo, and A.P.C., the decorative militarisation of fashion today differs from the subversive intentions of camouflage prints worn ironically in the 1960s by Vietnam War protestors. Rather, modern interpretations of arms and armour are more mainstream than countercultural, and often trivialise violence as a potential source of humour or titillation.

Consider the Fembots and their machine-gun 'jubblies' from the Austin Powers franchise, which Lady Gaga reprised more literally with an AK47 bra in her 2009 video for Alejandro, directed by fashion photographer Steven Klein. Madonna wore Chanel's 'Miami Vice' shoes - killer heels where pistols provide the height - to the premiere of her directorial debut for Filth and Wisdom, perhaps a wry flirtation with threat just after her split from director Guy Ritchie.

It is no surprise that these issues of surveillance arise at airports, which are the key nodes in the global network of successive fashion weeks, pre-fall, and resort collections. Leandra Medine, a humorous blogger about serious fashion and the front row face of The Man Repeller, Instagrammed a video of her grommeted denim with studded metal cuffs and fringed cowboy booties, captioning it, "Airport security, here we come!" The act was somehow petulant but joyous, referring not even to the ultimate destination of travel, but rather to the willful caprice of a security breach and the certain knowledge of a looming, beeping wanding.