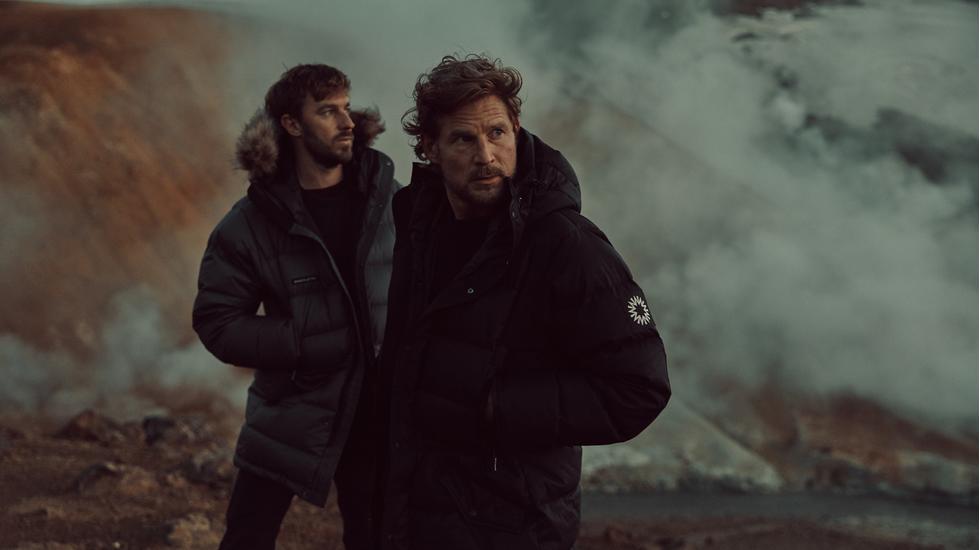 Explorer Explorer Sir Raymond Priestley said: "For scientific discovery give me [Robert Falcon] Scott; for speed and efficiency of travel give me [Roald] Amundsen; but when disaster strikes and all hope is gone, get down on your knees and pray for [Ernest] Shackleton."

Sir Ernest Shackleton was an Anglo-Irish Antarctic explorer, best known for leading the Imperial Trans-Antarctic expedition from 1914 to 1917 and the inspiration for eponymously named adventure-wear brand. Since Shackleton's inception in 2014, founders Ian Holdcroft and Martin Brooks have been razor-focused on creating a brand worthy of "the boss's" great name.

We caught up with co-founder Ian to chat guiding lights, daredevil tendencies and what being named a 2020 Brand of Tomorrow by Walpole means for Shackleton going forward.

Describe the brand in three words

For the uninitiated, who was Sir Ernest Shackleton?

He is one of history's greatest leaders. Shackleton led three British expeditions to Antarctica between 1908 and 1922, the most renowned being the Imperial Trans-Antarctic expedition from 1914 to 1917, widely regarded as one of the most extraordinary stories of courage, leadership and survival against the odds.

His ship, Endurance, was trapped and crushed by pack ice in the Weddell Sea, leaving the 28-man crew stranded. For months on end, the crew lived, suffered and survived on drifting ice. They hauled three small wooden lifeboats for miles to find open water to escape. They eventually set off for the inhabitable and hostile Elephant Island. When they reached dry land for the first time for the best part of two years, Shackleton knew their only chance of survival was to attempt a daring 1,200km voyage over the treacherous Southern Ocean to South Georgia. Shackleton and five crewmates made the epic journey in search of rescue. They eventually made it to a whaling station at Stromness. Shackleton returned to Elephant Island some 137 days after leaving, to rescue the rest of his crew.

He was a remarkable leader, able to inspire others to achieve and believe the seemingly impossible, and his optimism was relentless. But he was not reckless. He was nicknamed "Old Cautious" by his men and described as someone who was "realistic about circumstances but optimistic about outcomes." Shackleton was known for weighing up the options in every situation - the wellbeing of his crew meant more to him than success and fame, as demonstrated during his Nimrod Expedition (1907-1909), when he turned back less than 100 nautical miles short of the South Pole and eternal glory.

Is there a story behind the Shackleton logo?

In his final diary entry, the night of his death, Shackleton wrote, "In the darkening twilight I saw a lone star hover gem-like above the bay."

Following his burial, Frank Wild, Shackleton's close friend and second-in-command on the Imperial Trans-Antarctic Expedition chiselled a nine-pointed star into Shackleton's gravestone in Grytviken, South Georgia, Antarctica.. This symbol meant a lot to Shackleton; he was quite a superstitious man and had noted that the figure nine recurred in his life. Our logo is a modern adaptation of this.

I was born in Stoke-on-Trent and moved to the edge of the Peak District as a young boy. I was fortunate to be surrounded by beautiful and dramatic scenery and spent much of my time playing sports and being outdoors. Although I didn't realise it at the time, it was days spent exploring the bleak moorlands and scrambling on the rocky ridges of The Roaches, where my thirst for adventure began.

I live in central London now, but I love nothing more than putting on my trail-running shoes and running for hours. Being brought up in a community built on the textile and clothing industry, I sometimes wonder if it was my destiny to build a brand combining my passion for endurance sports, adventure and the outdoors with clothing.

Legacy. To play a part in creating a very special brand and organisation, a brand that resonates with people and is revered around the world. Shackleton represents courage, pioneering spirit and sustainability - we want to be the world's most respected and desirable brand in luxury, sustainable, high-performance clothing.

What does it mean to you for Shackleton to be named a "Brand of Tomorrow" by Walpole?

There are so many incredible British luxury brands emerging, to be recognised alongside them - including SUITCASE - is an honour. So much hard work goes into building a business and being named as a "Brand of Tomorrow" was evidence we're doing some things right. We have a lot to learn, but it's an incredibly exciting journey to be on. Walpole has been very supportive throughout 2020, especially considering the circumstances and challenges many businesses and people have faced.

What's the first piece of Shackleton kit you'd put in your bag for a weekend escapade?

Now, that's a tough question. I love all our products. I'll go with the Titan Gilet because it's lightweight, packable, versatile and warm. It can be worn throughout the year as a mid layer or top layer. It looks fantastic and performs incredibly well in any climate.

What are the hallmarks of Shackleton clothing?

We combine luxury refinement and style with best-in-class performance. Our pieces are made in the UK and Italy, and tested in Antarctica. We're introducing more and more recycled and recyclable materials, including a jacket made from reclaimed ocean plastics.

You developed the world's first extreme-weather photographer's jacket in partnership with Leica Camera AG. How did this come about?

The CMO of Leica first saw Shackleton in Harvey Nichols in London in 2018. He loved our attention to detail, our approach to product design and development and how we sourced the finest manufacturing partners to engineer our garments. It was an amazing collaboration working alongside Leica and world-renowned expedition photographer, Martin Hartley, to develop the jacket. We're currently working on another, all-year-round photographer's jacket with Leica. It will launch in 2021.

Tell us about Shackleton Quests…

As a modern, luxury brand it's crucial we connect with our global audience through offering experiences, as well as products. Quests are mini-expedition experiences led by world-renowned, record-breaking explorer, Shackleton Director of Expeditions Louis Rudd MBE. The first "polar" experiences will hopefully be in Finse, Norway in March 2021, followed by more Quests in extreme locations, such as Antarctica.

Your products are tested in the Arctic and Antarctica. What does that process entail?

Testing is a crucial part of the development process. But even before the design phase, we seek Louis's expert insight into what makes a product perform in the extremes. He's a record-breaking polar explorer and served in British Special Forces for 27 years, and an expert in human performance in extreme environments. We will also be combining Quests with field testing, giving our guests the opportunity to wear and test new Shackleton products before they launch.

The Lost Pianos of Siberia by Sophy Roberts.

What are your travel essentials?

Do you consider yourself a daredevil?

I've run across the Atacama Desert in Chile and rowed across the Atlantic Ocean from Africa to the Caribbean. I guess that's kind of daredevil-ish in some eyes.

I can't give too much away. It's going to be a world-first attempt and will, if successful, establish a number of world records. More importantly, with science and discovery at the heart of the expedition, it will bring the world's attention to an evolving environmental crisis in the most pristine corner of the planet. There are a number of Covid-related logistical challenges to overcome, but we're confident we'll be underway in December 2021.

What's next for Shackleton?

Our focus is firmly on designing and building sustainable products - working with recycled and recyclable materials,reclaimed plastics and partnering with the finest manufacturers around the world. We'll be announcing a major collaboration in 2021. Plus, we'll build on the initial success of Quests and launch more adventure experiences across the globe. Beyond that, build a rocket and explore the universe. That's what The Boss, Sir Ernest Shackleton would do.