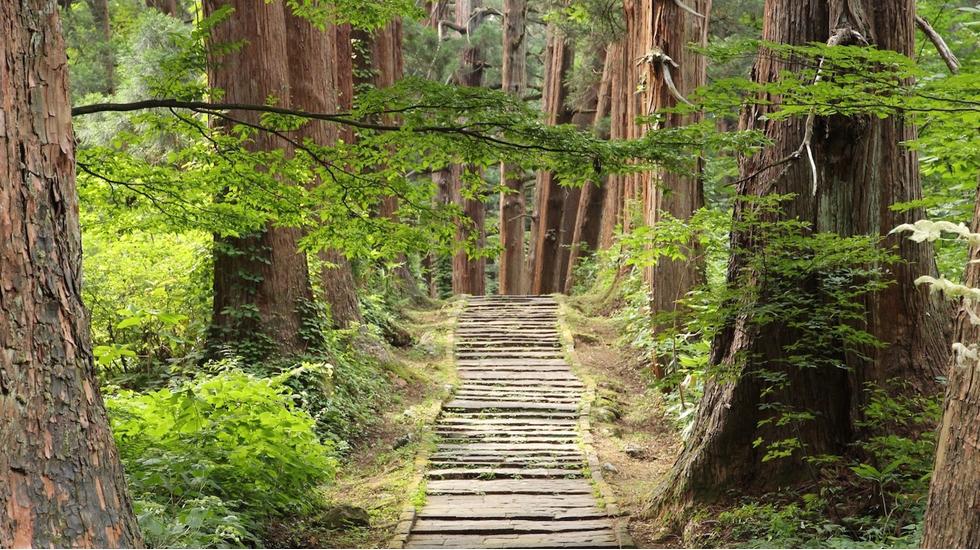 Approximately Approximately 20 million people visit Tokyo every year, but of these kawaii-obsessed, matcha-tea sipping tourists only a handful will board the 60-minute flight from Tokyo to Yamagata. A bountiful, sake-producing region that is also home to Japan's best restaurant, we suggest following in the footsteps of our Print Editor-in-Chief, Olivia, who journeyed through this rural landscape for The Slow Issue.

Located in the northern rice basket prefecture of Yamagata, the town of Shōnai and its hinterland is one of the most compelling areas. A broad coastal plain near the Sea of Japan, it's chequered with rice paddies and blessed with a rich water supply resulting in beautifully varied scenery and fertile soil. It is no surprise, then, that the region is best known for its food.

The only place in Japan to have been awarded the status of UNESCO Creative City of Gastronomy (one of 18 locations world wide) Shōnai is leading the way in organic farming through family-run farm-to-table restaurants. Forget sushi conveyor belts, we've hunted down some of Japan's greatest food artisans; in Shōnai its all about provenance and precision.

For those guided by spirituality rather than their stomach, Shōnai's rebirth practice of Shugendō, an ancient form of folk religion centred on the three sacred mountains of the Dewa Sanzan, is a major draw.

God-like notions aside, it's time to wave goodbye to the bright lights of Tokyo and embark (by way of Tokyo-Haneda airport - a one hour flight to Shonai) on a pilgrimage to Shōnai - in a few years, the path will be a well-trodden one.

Japan's farmers were encouraged to use pesticides after the Second World War meaning that today less than 0.5 per cent of all farming in Japan is organic. Going against the grain, 40 years ago Naa restaurant founder Kisaku Onodera made the pioneering decision to return to organic farming - and is encouraging others to do so. Following collaborations with farmers and chefs, this family-run homestay was recently voted the best restaurant in Japan. Stroll among patches of chestnut and watermelon to learn more about the region's unique terrain before feasting on sweet aubergine with miso paste and copious bowls of sticky rice from the surrounding paddies. We also recommend Kurayashiki LUNA for local, traditional cuisine and a cooking workshop where you'll learn to perfect Tsuyahime rice.

Train with the Yamabushi

If you can't quite distinguish Zen and Esoteric Buddhism from Shintoism, trying out Shugendō (a fusion of all of them) will give you a sense of each. With an emphasis on immersion in nature as the pathway to Enlightenment, Shugendō's mountain priests, the Yamabushi, will give you full licence to channel in-the-know smugness on your return to the office. They embark on extended periods of pilgrimage which often involve incredible feats of endurance, such as traversing perilous terrain, meditating in enclosed spaces filled with acrid smoke, leaping over fire and, in the past, self-mummification. Opt in for a half day Yamabushi lesson experience Gyo-experience on Mount Yudono and get ready to be reborn.

Relax at one of Shōnai’s hot springs

Get in some chill-out time along the Atsumi River, where large Japanese ryokans (inns) as well as more modest lodgings cater to (mainly Japanese) visitors. Take in mountainous views at the Atsumi Onsen, a bathing spot that is more than 1300 years old and has inspired writers and poets such as Basho Matsuo and Akiko Yosano, both of whom referenced the onsen in their literature. Another popular spot worth exploring is Hijiori Onsen. This hot-spring town lies an area which claims the most snowfall in Japan' snowscapes and sauna-like surrounds a happy traveller make.

In the spring, the Yamagata prefecture is awash with cherries. Spring/summer is prime pickings, when Japan's countless cherry trees come into their own. While most of them are cultivated for cherry blossom and don't bear fruit, knowing where and most importantly when to seek them out is key. Deemed "in season" from May to July, gorge on these succulent ruddy fruits as you pick. Also at their best in summer are blueberries, some of which are as plump as 500 yen coins. Head to the foot of sacred Mount Gassan where you can fill your boots at one of the largest blueberry farms in Shonai.

Ski Down an active volcano

Thrill-seekers should make a beeline for a ski adventure down Mount Chōkai. From the summit you can see the Sea of Japan as well as Mount Hakkouda, Mount Iwaki and Mount Zao. Even if you're not a keen skier (the longest run is 1300m) the views are well worth the hike to the top. Plotted on the southern border of Akita and Yamagata, Mount Chōkai is regarded as sacred by followers of the Shugendo branch of Shinto. At dawn on a clear day, when the shadow of Mount Chōkai is reflected dramatically in the sea, a palpable spirituality is enough to ruffle even the firmest non-believers.

Mention Japan in springtime and images of cherry blossoms are likely to conjure in your mind. A symbol of the transient nature of life, watch the flowers that launched a thousand haikus as they unfold at Tateyama Park and Tsuruoka Park; both perfectly dreamy backdrops for cherry blossom appreciation. Come spring, float along the Mogami River where you can expect scenes of budding cherry blossom. Regardless of season, a cruise along the river as it flows from southern Yamagata Prefecture in the north, turns west at Shinjō before flowing into the Sea of Japan at Sakata, is worth getting wet for.

A renowned pork- and wagyu beef-producing region, Shōnai and Yamagata respectively are musts for meat-eaters. Get a taste of the region's best cuts for a very reasonable price at Nakajima in Sakata City. The first floor hosts a butcher shop, while the second floor is a buzzing restaurant that is popular among locals. It's good to note that the staff at Nakajima only speak Japanese but are happy to accommodate international guests; tastings are a sure-fire way to get you re-thinking your lacklustre lunchtime sushi-chain habit.

Zen out with Zazen

The Soto Zen Buddhist tradition emphasises the practice of Zazen: silent, seated meditation. While you're in town, practise Zazen with a Buddhist Priest at the mid-10th century Zenpoji temple, in which you'll learn to give complete attention to each moment while in the Buddha position. Zenpoji's ocean-centric pagoda is dedicated to the sea god Ryūjin and fishermen from all over come to pray and make offerings at this temple. If you're planning on taking a boat trip while in Shōnai (and are superstitious), this meditation is well worth your time.

Climb the Three Mountains of Dewa

Even if you opted out of Yamabushi training, these sacred mountains in the ancient province of Dewa are still worth exploring. Forming a natural hiking circuit, Mount Gassan (the highest of the three), is best known for its natural scenery as well as being a popular pilgrimage site. Closed for the majority of the year due to heavy snowfall, it's best to visit in summer. The peaks are home to shrines, pagodas and temples. Each with their own appeal, Mount Haguro (the smallest of the three peaks) is home to a 600-year-old, five-storey Go-Jyu-No-Toh pagoda, while Mount Yudono is considered the heart of the terrain, famous for its goshintai or shintai (sacred objects). The shrine on Yudono is revered as hallowed land which must be kept secret - photography and video recordings are still prohibited.

This pilgrimage tour offers a prime demo experience for those curious about ancient Japanese beliefs. Transport is prearranged and rates include traditional Japanese-style accommodation at the foot of Yudono-San Mountain. Post expedition, dine on mountain-fresh fare and follow with an onsen bath; if you're brave, challenge the rigorous stone paths extending deep in cedar forests to experience the Shugendo training practice. An excellent option for those keen to maximise their time in the region.

To book your tour and for more information about Shonai visit: odysseyjapan.com, facebook, @odysseyjapan