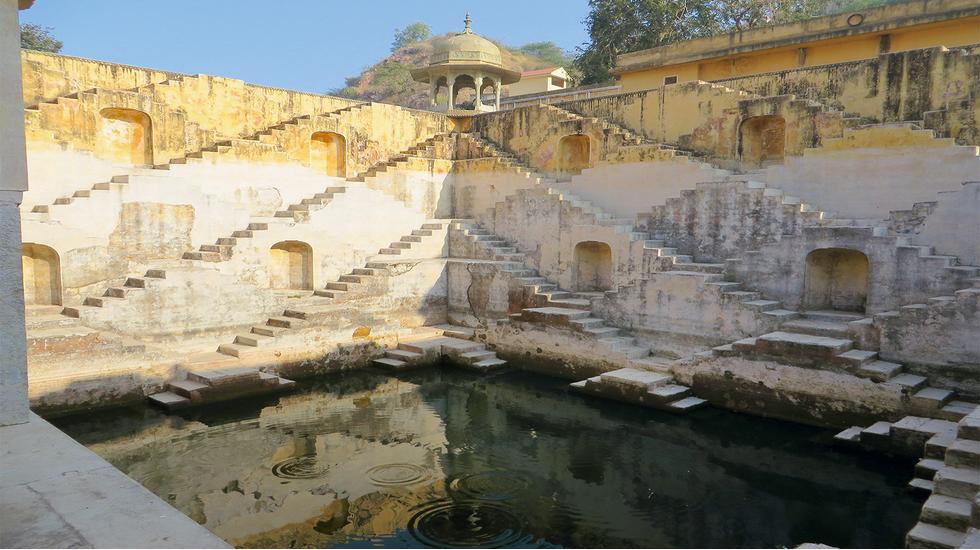 Stepwells Stepwells evolved in response to India's dramatic climate which is bone-dry most of the year with intermittent monsoon rains. Establishing a reliable water supply all year long was imperative, particularly in regions where the water table could be many stories underground at its lowest ebb. Steps - sometimes over a hundred of them - allowed direct access to the water, and as the level rose during the monsoons, they gradually submerged, reappearing again when the flow receded.

Rudimentary, rock-cut stepwells are thought to have developed between 300-500 CE, and by the early 7th century they'd become extremely sophisticated in terms of engineering, architecture and art. By then, they were the most multi-functional structures of their times, performing many roles beyond simply harvesting water. They provided refuge from the heat, acted as subterranean Hindu temples, were resting points along remote trade routes and social centres at which women gathered on a daily basis. Important charitable gifts to the community from royal or wealthy patrons, it's thought that about 25% of stepwells were commissioned by women, who often dedicated the structures to their deceased husbands.

By the 18th century, stepwells could be found in cities, villages, and the hinterlands, within forts, on palace grounds and in private gardens. Many can still be seen if only you know where to look. Despite their former importance, most of these magnificent structures have languished in various states of decay for centuries, and with little factual information available. When pumps, tanks and plumbing became available in the 19th century, stepwells lost their original purpose and were no longer maintained. Today, a handful are preserved by the government, but the majority - thousands, across India - were abandoned, eventually filled with rubbish, encroached on all sides or on the verge of collapse. Raising awareness internationally is the only way to guarantee the survival of these endangered edifices, and put them back on the architectural grid.

The Vanishing Stepwells of India by Victoria Lautman published by Merrell