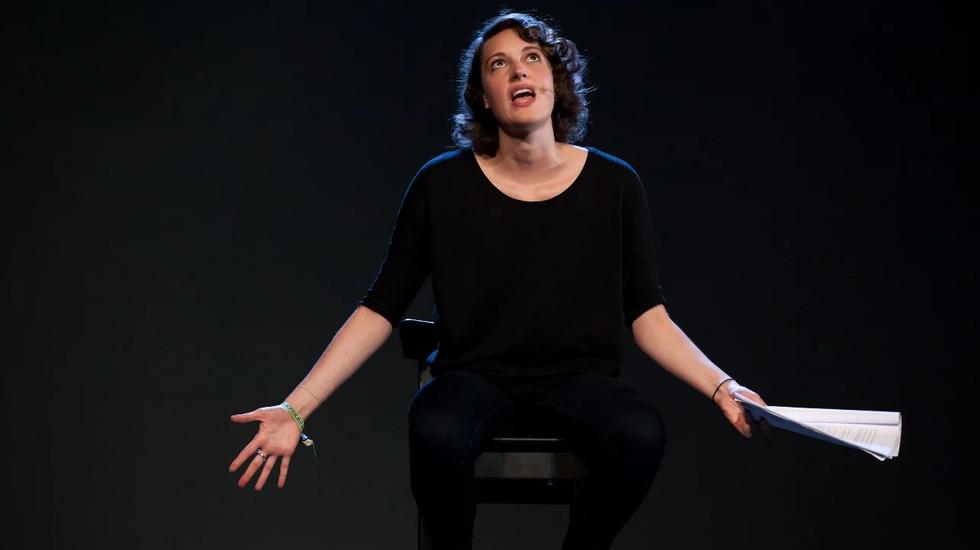 Phoebe Phoebe Waller-Bridge sits alone in the middle of a dimly lit, cavernous room. A single spotlight exposes her raw, natural beauty. Over the course of a single hour she remains there, delivering a haunting performance without props, special effects or even a co-star.

Fleabag is one woman's story. But it is a story that will resonate with any 20-something navigating an unknown world of unfulfilling jobs, regretful sexual encounters, estranged parental relationships and general self-loathing. Phoebe's character feels like Britain's answer to Lena Dunham's Hannah Horvath: a flawed, selfish, chaotic, perverted young woman with a wicked sense of humour and uncanny ability to win the audience over in spite of her borderline sociopathic behaviour. Like James Gandolfini with Tony Soprano,Waller-Bridge has taken an objectively reprehensible character and made her real, complex, even likeable.

It's not hard to see why the production blew me away. A RADA graduate, Waller-Bridge has established herself over the years as one to watch, with a string of successful stage and screen performances, from Roaring Trade at the Soho Theatre to Hay Fever in the West End, as well as appearances in The Iron Lady and Albert Nobbs. Writer as well as actress,Waller-Bridge not only penned Fleabag (which is now being optioned as a television show for Channel 4), but is also scripting a feature film and has a number of television shows in development.

In the chaos of the opening weekend at the festival, SUITCASE got to chat with the renaissance woman herself.

There seems to be a current vogue for the “anti-heroine” – why do you think this is?
I think women get bored of having to be sirens. It's much more fun to perform someone who is flawed, complex and not perpetually attractive. Women have been writing these roles for themselves for years. Still feels like a news flash every time someone else does it. Ab Fab nailed it.
Have you found it difficult navigating the predominantly male world of comedy?
I try not to think of it like that. I'm putting as much energy into making work I hope is good and entertaining. It is often harder for women, there is no question. But if I see it as a mountain to climb I'll just be knackered before I've even started. There are great people out there supporting artists of both genders. You've just got to work your tits/balls off whoever you are. I do feel the restrictions in terms of the parts available to actresses in comedy. Female characters are often defined by whether or not the main male characters want to have sex with them. You're either a girl someone wants to fuck or you're the girl no one wants to fuck. That gets a little boring. But on the whole, there is fantastic work coming around for and by women. It's an exciting time.

What’s it like leading a one-woman show?
It's brilliant, but only when you've got the script firmly under your belt. It's incredibly painful to learn, but when you've got a grip on it you can really start to build a rapport with the audience, which is what it's all about really. It's also a terrifying, isolating, and very surreal experience. But I'm not completely alone; our stage manager Char is my rock. I can see her grinning under a little light in the tech box behind the audience, she is a beacon of encouragement if I get lost.

When did you first realise you had a knack for the performing arts?
Seven. School play. Butler. One line. Two people laughed. I nailed it.
You’ve started to branch out into film. Is this something you want to continue to pursue or does you heart lie in theatre?
I'd love to do more film. It is very different. I feed off the atmosphere an audience brings into the room. I like knowing that they are completely at my mercy. Screen work is so far from that. You have no control over what people will see in the end or how it will be cut to affect the story and the audience. It's exciting because it's so much more real. But you don't have the immediate sensory barometer that an audience gives you. You can feel if you are doing terrible acting. On camera you never really know...

What excites you about performing at the Fringe?
The energy of the place is intoxicating. It's very inspiring to be surrounded by people making their own work. It feels like somewhere you can make mistakes, where risk is rewarded and the mob really do matter over the critics.
What other acts are you keen to see while you’re here?
I've heard Missing by Gecko at the Pleasance is extraordinary, Bryony Kimming's new show sounds like a blast, Jack Thorne's adaptation of Stuart: A Life Backwards, I'm With the Band by Tim Price, Where the White Stops by Antler, Blam and... there is so much, I haven't quite got my head around it yet. I'd like to see as much alternative stuff as possible. There are some crazy things happening here.

What will you be doing with your downtime in Edinburgh?
I'm going to pack in as many shows as I can, party like an idiot and make the most of being around such incredible people. And I have a few writing projects on the go so I'll have to crawl into a cupboard and pretend to do some work while everyone else is rolling around Arthur's Seat.
What’s next on the agenda after Edinburgh?
I'm going to write until my fingers come off. I'm determined to scribble out a film and a TV show at some point over the next few months. As a company (DryWrite), we are producing a new play by Vicky Jones towards the end of the year. I'm incredibly excited about that. It's a corker.
Finally, describe Fleabag in three words.
Rude, ruder, sad.