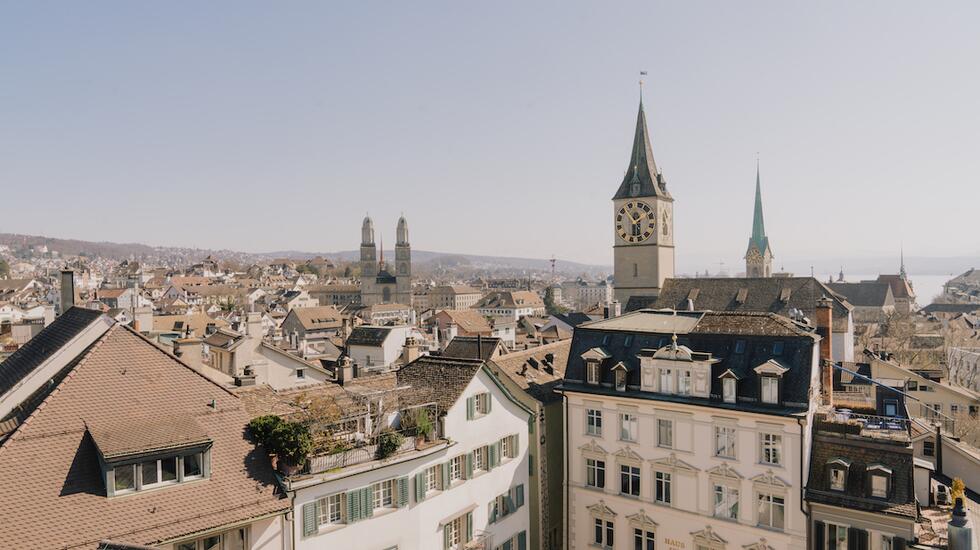 It's It's dangerously easy to fall in love with Zurich. Some travellers are romanced by the medieval architecture and soaring church spires of the Old Town, a ravishing cityscape that captivated notable residents as varied as James Joyce and Tina Turner. Others are seduced by the high-octane energy of this cultural hub, where grungy post-industrial creative districts like Zürich-West coexist comfortably with high-concept architecture housing priceless art collections, such as the £175-million Kunsthaus Zürich extension. And then there are those who fall for Zurich's delightful juxtaposition of refined sophistication and outdoorsy joie de vivre. It's not uncommon to see the glamorous creatives and business leaders who work near Bahnhofstrasse, Europe's swishest shopping district, cheerfully leaping into the lake and river on their lunch breaks, before devoting their weekends to gung-ho activities such as skiing or e-biking in the nearby mountains.

Beside the water, left, and a tram in the city centre. | Photo credit: Kevin Faingnaert

The city's vibrant start-up scene, co-working spaces and recently regenerated post-industrial districts are the ultimate hallmarks of a progressive 21st-century urban centre. But Zurich has a long and illustrious history as an efficiently run city that's also a hotbed of industry and a haven for radical thinkers. During World War One, philosophers, pacifists and disenchanted artists gathered in this neutral hub. James Joyce wrote much of Ulysses in the city, just a few streets away from where Vladimir Lenin plotted revolution.

Anyone who visits this Swiss destination during one of its legendary festivals will see the city's gently rebellious side alive and kicking. Street Parade, held in the summer, is one of Europe's largest parties, where techno music echoes off gothic church spires and revellers cool down at the countless outdoor bathing spots known as badis. Arguably more nihilistic is the Sechseläuten spring festival, culminating with the burning of a giant snowman effigy called the Böögg, its head stuffed with explosives.

Somehow, Zurich manages to balance being a big-hitter with having the soul of a village. It's spotless, safe and slickly run, yet has the creative heft and post-industrial grit of Budapest and Berlin. Travellers here discover it's possible to have a luxury city break and gung-ho outdoorsy adventure while staying at the same urbane hotel. The best of both worlds, in one cosmopolitan space.

We love it when nice new hotels happen to gorgeous old buildings, and the savvy Ruby Hotel group has artfully converted one of Zurich's oldest movie theatres into a sexy, sleek 208-room hotel. It's minutes from the train station and perfect for travellers who want modern functionality and affordable rates alongside the grandeur of a historic building.

With a perfect position in the heart of the recently regenerated Europaallee, a former city storage area located between the main train station and the creative district of Zürich-West, this deservedly popular and thoroughly modern boutique hotel offers affordable rooms, a killer breakfast and a sauna with views over the trains.

This gorgeous, luxurious Old Town icon was lovingly constructed over the course of a decade by fabulous local architect Tilla Theus, who transformed nine medieval and protected Augustinian homes into an atmospheric, impeccable five-star hotel. If you can't stretch to a stay, make sure you at least pop into the gorgeous Widder Bar for an expertly poured martini.