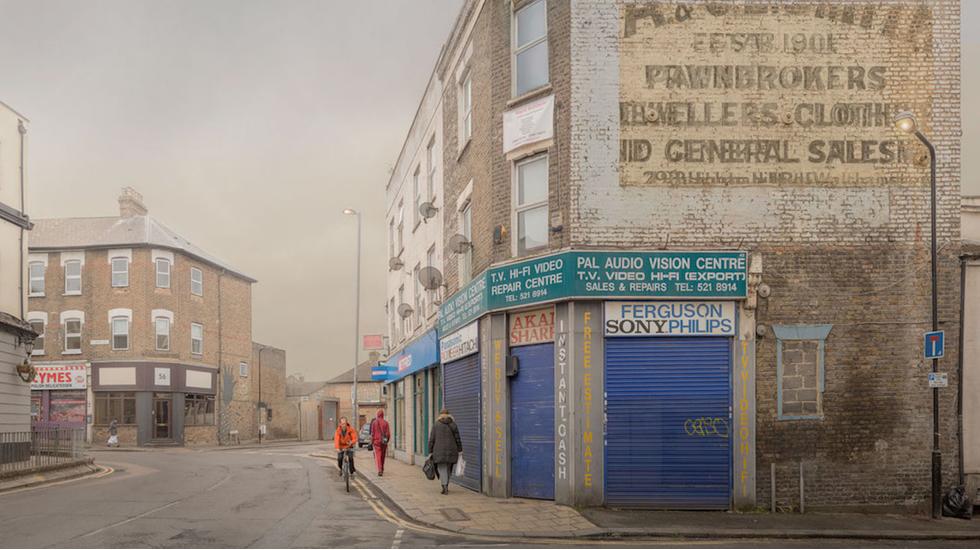 Living Living and working in East London for over 30 years, photographer Chris Dorley-Brown has grown accustomed to change. Weaving round bends and corners for the past three decades, the city's mass transformation has rendered it almost unrecognisable.

Starting with the corner where he set up his photographic practice, Chris' hyperreal photographs provide a unique documentation of an ever-changing landscape. An Orthodox Jewish family and a woman pushing a pram appear on the street corner of a half-demolished building, passing each other by, when in reality they were never there at the same time. Using multiple exposure images, different narratives play out simultaneously, creating dream-like scenes that lie somewhere between fiction and fact.

Compare gritty London street shots of a bygone time with your own Google street view sourced images and you'll retrieve a starkly changed landscape. Akin to film stills, these images show the street corner as a location in flux, a place of intersection and momentary interactions, and a metaphor for the ever-changing face of East London.

The English language is like London: proudly barbaric yet deeply civilised, too, common yet royal, vulgar yet processional, sacred yet profane.

In Chris Dorley-Brown's visual language, he computes the contradictions and strides of an evolved and revolutionised London.