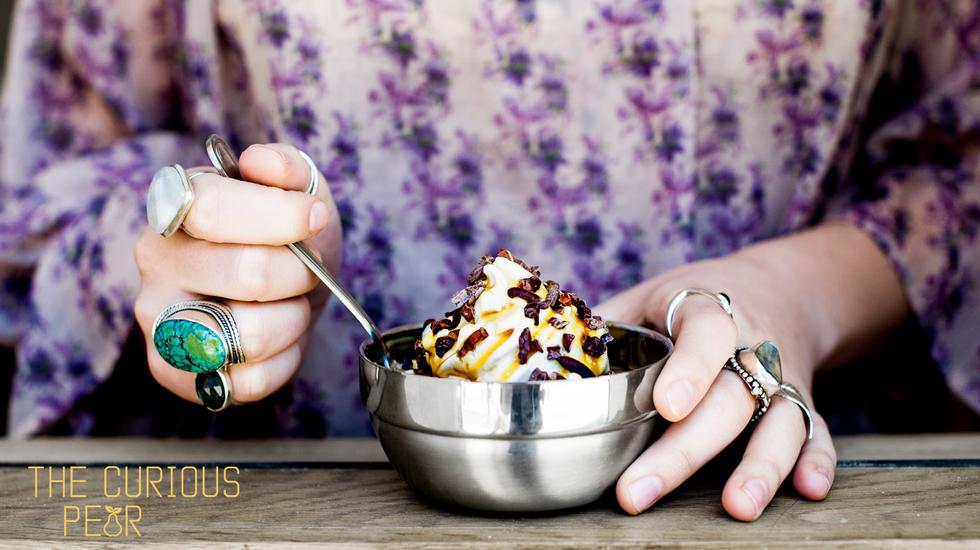 Just Just when you thought ice cream was falling off the radar, Van Leeuwen has made it exciting again. Since the Van Leeuwen brothers began selling their artisan ice cream from buttercup-yellow vans in 2008, the childlike excitement that goes hand in hand with a waffle cone has stirred in New York City again. The first Van Leeuwen truck arrived on the scene seven years ago and the brand quickly amassed a following for their fresh ice cream prepared with a simple base of milk, cream, cane sugar, eggs and an array of high-grade flavours.

"No one was serving anything special," BenVan Leeuwen, who started out selling ice cream sticks for old-school brand Good Humor, tells us. "It was all just soft serve. There was a gap in the market for real scooped ice cream with real ingredients that you could feel good about eating."

Only a year after Van Leeuwen's conception, Bon Appétit Magazine placed the delicious ice cream in their list of the Top 10 Ice Cream Shops in the United States. Meanwhile, their simple, high quality recipes continued to draw in the fans.

"What we're doing here is really just a simple retake of a very tried and true concept," LauraO'Neill, co-founder of Van Leeuwen, says. Take their best-selling vanilla - made with bourbon and Tahitian pods grown in Papua New Guinea - or their hazelnut variety, created using Piedmont nuts which, we are told, are 'simply the best on earth'. From Indonesian palm sugar to redcurrants grown in the Hudson Valley and chocolate sourced from a family-run chocolatier in France, Van Leeuwen is dedicated to hunting down the best possible ingredients for their luxurious ice cream. You only need to taste the stuff to understand the difference that high-calibre ingredients make. There isn't a single counterfeit vanilla speckle in sight...

Bearing all of this in mind, it was no surprise to find Van Leeuwen's newest Brooklyn café, which opened in January, brimming with ice cream guzzlers despite the below-freezing winds outside. The factor that separates Van Leeuwen from other ice cream brands is its dedication to simplicity; a focus upon quality rather than radical recipes. "You need to do things because you're inspired by them, not to be part of a trend," Laura says, "because eventually, trends always become over-saturated."

Every batch of ice cream is crafted from scratch in their Greenpoint kitchen, and goes out to four cafés spread around New York. Each one is as bright as the last, with turntables piping out soft music to the constant flood of customers. The vans that have stayed tucked away during New York's brutal winter months will soon be resurfacing for spring, while two brand new ones zip around sunny L.A. throughout the year. On top of that, the trio will be releasing a cookbook in June, with over 100 ice cream recipes to try out.

In short, Van Leeuwen has single-handedly made ice cream cool again. "It is such an innocent purchase - ice cream is just about pure enjoyment," Ben explains. "It's about making yourself happy in that one moment."

We met up with Laura and Ben to learn more about what makes this small batch company tick, before diving headfirst into a salted caramel and hot fudge sundae. All for the purpose of research, obviously.

THE CURIOUS PEAR: How do you come up with flavour ideas?

LAURA: There's not really a method to it beyond just thinking that something sounds delicious. From there, we just make sure we find the best possible ingredients.

BEN: This sounds so cliché, but a lot of the flavours that I like the most will just pop into my head while I'm meditating. We're currently looking to make the menu more structured, bringing it into season a little more. We also want to do collaborations with other chefs. We're currently in talks with Tara from Okonomi, she has some really exciting ideas for Japanese flavours. They're going to be a little crazy, we're so excited.

CP: Do you think it's better to go all-out on the sugar/fat content when making ice cream, to make it taste as good as possible?

L: Yes and no. Our ice cream is very simple; it's milk, cane sugar and egg yolks. We use a high butter content so that we don't have to stabilise it with other things. But we like it to be less sweet than most ice creams, because then you can really taste the flavours without it being cloying. We're always trying to improve.

B: The goal is just making it as delicious as possible. Ultimately, ice cream should be a treat. Modern consumption habits mean we feel like we should be able to have as much of things as possible, so people leap at 'no fat'/'no sugar' products because they see it as an opportunity to eat a lot of something. But actually, if you limit how much sweet food you eat, you enjoy it so much more. We want to be that place you come to for that feeling.

CP: Where did you learn to make ice cream?

B: Ice cream really isn't very complex. We were always avid cooks and just taught ourselves.

L: The ingredients we wanted to use always dictated the method. There was always a lot of trial and error as we tweaked the formula. For example, the most popular flavour is vanilla, so we just worked really hard on making it really special. We use two types of vanilla bean, so it's really complex in flavour. Then when we were making pistachio, rather than adding any weird flavourings we just sought out the best pistachios on earth to create it with.

B: Our main focus has always been to make really simple flavours with the best possible ingredients, showcasing that one flavour. When you're not adding a lot it means the actual ice cream has to be amazing. People will often come in and try the vanilla, as that's the quality test!

CP: There are so many ice cream companies; did you feel it was a risk when you first began Van Leeuwen?

B: Ice cream can be a hard market in New York because winters are bad, but I think generally ice cream is a good business because it's something that everyone likes and always will. There's nothing niche about it. It's not like we're trying to sell savoury doughnut sandwiches or something.

L: We started very bare bones, too. We started the company with about $80,000 and investments from friends, and then we just put everything into it. Like Ben says, there's always a risk, but we felt like it was a market we could stand out in.

CP: Ben, what's it like working with your brother?

L: It depends what day you ask him!

B: It's great…! It's wonderful for the same reasons that it can be terrible. You have no filter with family, so things can be said that aren't necessarily always good. But then in the same vein you have this honesty and trust that is unshakeable. When we're in L.A., Pete and I take walks in the park and come up with ideas when we're doing things together. I feel like if we weren't family we wouldn't spend time together in that way, so being brothers can be good for business!

L: Ben and Pete and I are not technically family, but we really feel like we are. We just always know that everyone is on the same page. It's amazing, really!

CP: What do you love most about what you're doing?

L: To be working with a product that you're proud of is a real privilege. I used to work in events management, which was kind of a thankless industry. We're so proud of what we're doing, creating this company culture. Working for ourselves is definitely harder than working for someone else, and we never fully switch off. The phone can ring at any hour. But it's ours, and I'm so grateful for that.

B: The best part for me is summer time, when it's really busy and people are just so happy! There's something so nostalgic about ice cream, you can feel how much joy it brings people. I don't think it gets much better than that.