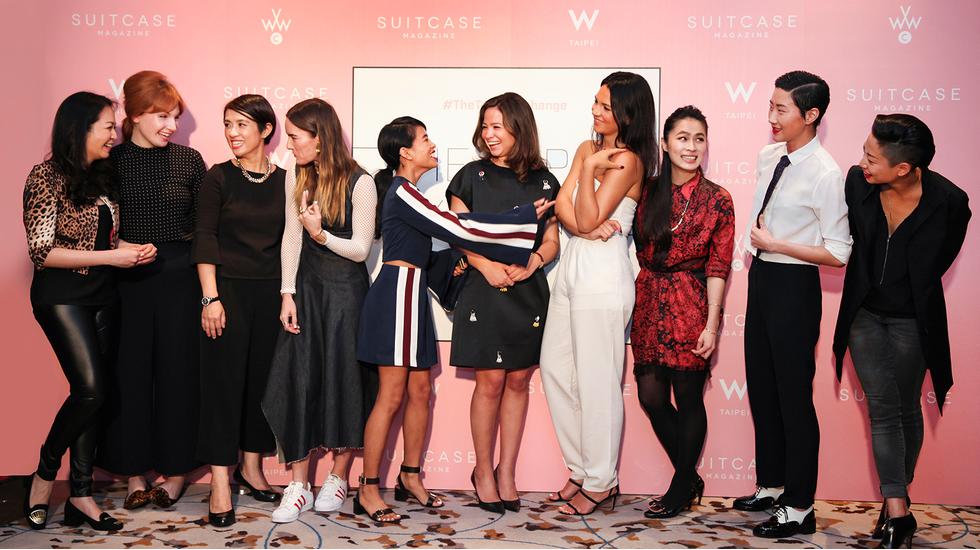 The The true beauty of a place is often revealed through its people. Since launching SUITCASE Magazine in 2012, I have strived to create a brand that moves beyond the limitations of a traditional publication to become a platform with this message at its heart. Through a global network of creatives and entrepreneurs, we've explored destinations with insider knowledge, inviting our readers along for the ride. At the end of last year, we decided we needed another way to showcase the importance of travelling by people. We decided to bring one of our city guides to life.

During this period of revelation, I met my match via Twitter: Phoebe Lovatt, founder of The WW Club. From her base in New York, Phoebe is connecting a network of ambitious women through events, workshops, panels, features and podcasts. We got talking, and quickly discovered a shared interest in Asian culture, wondering what the life of a creative, entrepreneurial woman is like on the continent. With the election of its first female president and its growing presence in the fashion and food industries, Taipei caught our eye. We decided we should visit and and most importantly, that we should visit with a group of engaged, entrepreneurial women.

Hence, The Taipei Exchange was born, a real-life version of SUITCASE Magazine: five days of discovering the city through its pioneering females and locals. We chose three women from the US and UK to accompany us on our journey to Taipei: Madeline Poole, Founder of MP nails who travels the world as the global colour ambassador for Sally Hansen, Olivia Lopez, travel blogger extraordinaire and Founder of Lust for Life, and Alice Levine, Radio DJ, TV presenter, and co-founder of food company Jackson Levine.

We partnered with W Taipei because of W's global presence, its strong female team and their focus on female empowerment across their properties this year. The hotel group introduced us to a huge network of Taiwanese women to help us create a complete cultural programme and introduce us to their city.

Along with the W team - the most energetic, lively and hilarious group of women - there were independent bloggers like Stephanie Hsu of Thousandth Girl and Tina Fong of Taipei Eatsand, most importantly our panelists: Leslie Sun, owner of one of Taipei's first concept stores Sunset Shop; Musée Wu, co-founder of A&M creative (a consulting and digital agency in Taipei); Wei Shuan Chang, founder of womany.net, a digital platform championing women's issues; Florence Lu, Editor-in-Chief of ELLE Taiwan and Content Officer of Hearst Taiwan and Wina Chen, Director of Operational Excellence at W Taipei and co-owner of trendy hot-pot restaurant Mr. Meat. These were the women who we believed would be able to give us an accurate insight into Taiwanese culture.

Our base for the week was the stylish W Taipei in the buzzing Xinyi district. Set between some of Taipei's top malls and historic sites, W Taipei is 31-floors high and has one of the best views of the city, which you can take in at the heated rooftop pool. With a focus on fashion, design, and music, the hotel is a hub for like-minded travellers from around the world and (very) trendy locals. We dined on mouth-watering dim-sum at YEN Chinese restaurant (some of the best soup dumplings we had that week), made personalised cocktails with the mixologists from the WOO Bar and burned it all off with one of their FUEL trainers at FIT. "We say B&F here" said the head mixologist, "because beverage comes before food." It's safe to say that we felt at home there and it was a struggle to leave. But Taipei awaited us…

We spent our first couple of days getting to know the city, moving through its past in Datong and Zhongzheng Districts and present and future in the East District and Xinyi. Taipei is a lot smaller than its neighbouring countries' capitals with a population of 2 million (for reference, Hong Kong is 7 million and Tokyo 13.35 million). It sometimes seems strangely empty until rush hour arrives and thousands of local families, couples, businessmen and the odd pet speed past on scooters. It's fascinating to walk down quaint alleyways towards towering high-rise buildings; architecture doesn't have much rhyme or reason here. But there's no doubt the streets are beautiful - tropical green plants burst out of every corner and crack in the pavements while its palette of pastel pinks, blues and greens softens the sombre cement structures. Much to the local women's delight, we found beauty in places they hadn't recognised - they couldn't believe it when Madeline Instagrammed their public bathrooms in the underground (with their perfect pastel palette) - and it became as much about their discovery as ours.

We visited the historic Xia Hai City God Temple, Dihua Street, known as Old Taipei (Datong District) with dried food stalls and Chinese medicine shops and Wang Tea House, now run by fifth-generation tea makers. We rode up to Beitou to experience the famous Hot Springs at Grand View Resort and ate dinner at STAY in Taipei 101, Taiwan's most famous landmark. We explored the Mingsheng district, where leafy streets and cool concept stores reminded us of La Condesa in Mexico, and met the Taiwanese man responsible for its resurgence - Jay Wu of Fujin Tree, a chain of shops with over 22 outlets.

We ate…a lot…at independent restaurants like Mr Meat and Fujin Tree Taiwanese Cuisine and Champagne, as well as night markets and street food around the city. We laughed - all day, everyday. It was a welcome surprise meeting people who have might just have a sense of sarcasm sharper than even the English.

But SUITCASE has long recognised that there isn't one itinerary for every type of traveller - that everyone has a different route into the heart of a destination. For Alice Levine and our Managing Editor, Emily, that route was food. The Taipei Eats tour, designed by locals Mike and Tina and led by foodie Jeanne, was the perfect way to navigate the complicated and untranslated trail of street vendors across the city. Many of the dishes they tried were legendary. Some, like the gua bao Taiwanese burger and thousand-layer scallion cake, will be the stuff of dreams for years to come - others, like stinky tofu, are more likely to appear in nightmares.

Olivia Lopez and Phoebe Lovatt explored the burgeoning design scene in Taipei at concept stores and cafés where young Taiwanese locals set up for the day with laptops and lattes. They visited studio Mano and met Yu-Chun and Min Ling who showcase the work of Taiwanese and international craftspeople alongside their own handmade jewellery, as well as The Good Design Institute Cafe in Yong Khang and Leslie Sun's concept store Sunset Shop. "People couldn't understand how I could have a coffee bar without seats…" joked Leslie, who had transplanted the idea from LA where she lived and worked for over a decade.

Beauty was an interesting entry point for both Madeline and me to experience the city. It's a huge industry in Asia and it clearly works - 40-year-olds look like 20-year-olds (and great news, they still drink). We explored Watsons, the local version of Boots or CVS with Alice Shih at our side, a friend of blogger Stephanie Hsu of Thousandth Girl. Alice told us about some of the most popular and often surprising ingredients (snail secretion and horse oil, for example) and helped us to choose the ultimate face masks - seen as the fountain of youth, women here apply them at least twice a week - and avoid whitening products, which were everywhere. We had foot massages at Relaxing Trip and a shampoo hangover cure at Sculptor barber (forget blowdrys; shampooing is where it's at in Taiwan). The focus on restorative treatments showed the care with which the Taiwanese culture treat their bodies and wellbeing.

Our jam-packed week culminated in a large panel event run by The WW Club and an intimate dinner cooked by Michelin-starred chef Wo Hoi Ming. The panel was attended by local students from creative and business universities, leading Taiwanese women and our friends which we had made along the way. We explored various themes both with our guests and leading Taiwanese female entrepreneurs, including the impact of travel, the different working cultures of the East and West and women in the workplace. The discussions flowed over into dinner as guests from many different cultures - Australian, American, Taiwanese, English - drank, chatted and laughed about our terrible Chinese.

Xiè, xie Taipei (thank you, Taipei) for embracing us with open arms, letting us take part in your wonderful traditions and take a peek at your exciting future. Taipei may be a 'small island' but it is bursting at the seams with innovation, new opportunities and potential as a result of all the ambitious women and men who live there.