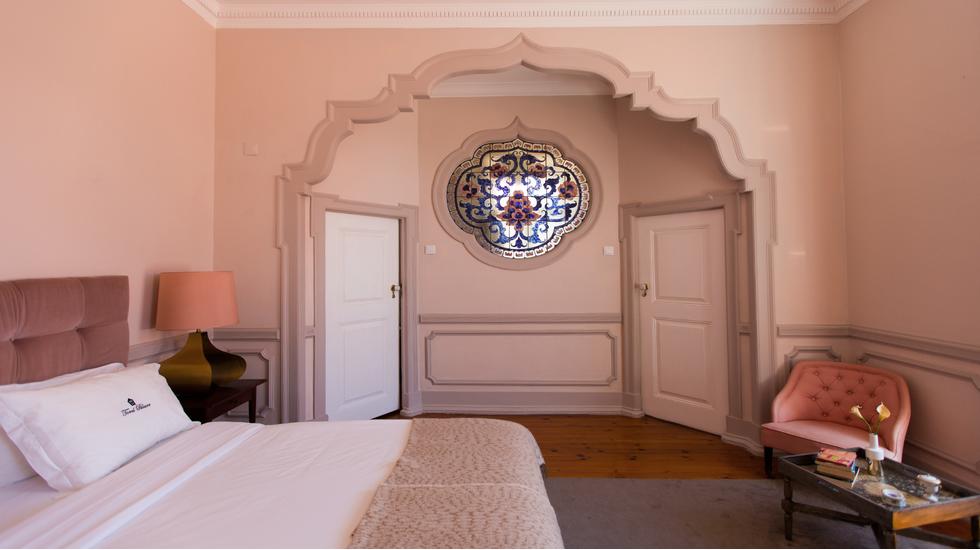 A A second home to the upper echelons - from Madonna and Christian Louboutin to newlyweds Alicia Vikander and Michael Fassbender - the hilly metropolis of Lisbon is enjoying a rather grandiose second wind. With a flurry of starry new residents proliferating its side-streets and palatial properties, Lisbon's hoteliers are taking inspiration from this city's revitalised allure.

Complementing Lisbon's effervescent energy and reflecting the city's historical density, Torel Palace comprises of two historic mansions - one cerulean, the other salmon - dating back to 1902 and 1904. The passion project of Barbara, Ingrid and Joao (two Austrians and a Portuguese) sits at the end of a tiny sliver of a street, tucked away from the bustle below. Perched on one of Lisbon's seven hills, namely the Colina Sant´ana, Torel Palace remains something of a hidden gem, despite its central location.

Comprising of 26 rooms, each is inspired by a queen or king of Portugal. Blending past and present, the rooms at Torel Palace brim with charm, personality and modern touches. Generously sized rooms decked in traditional Portuguese styles come with large wardrobes, an over-sized bed and all the home comforts you could conjure up. Suites are suavely finished and guests can anticipate a flair of regality - think faux-fur throws, sumptuous velvet headboards and gilded furnishings - in their chosen room. Come evening, mini-shortbread and a bedtime note are placed on your pillow as part of the hotel's turndown service.

Breakfast is served in the blue room and is available to guests all day long. Serving a simple continental breakfast including meats, cheeses, cereals, an assortment of breads and pastries in addition to some hot breakfast options, there is no lack of choice here. If you are somehow still peckish after breakfast, it's good to know that you'll never be too far from a pastéis de nata, the classic Portuguese pastry, which cost no more than a euro a pop.

Headed-up by 20-something chef Bernardo Agrela, Cave 23 blends classic and traditional Portuguese cuisine techniques and bold flavours. Open for dinner only, this eclectic bistro places its focus on domestic products. Tucked away in the far corner of the Torel Palace's enclave, guests can expect a hearty meal paired with some supreme wine - choose from a robust selection including full-bodied Malbecs and saccharin Moscato. For something a little less-committal, guests can dine at Terraço 23 where the menu offers refreshing and informal fare, dominated by light meals such as salads and tapas.

The shoebox-sized bar is an ideal pit-stop for a postprandial drink. Contrasting shades - from the rich black counter top to the green velvet chairs - create a seductive ambiance that will keep you here far longer than you'd anticipated.

Within a short distance you'll find…

Only 100 metres from the hotel is the oldest elevator in Lisbon. Dating back to 1884, the Elevador do Lavra brings you to the Avenida Liberdade in a matter of minutes, where elegant boutiques are a paradisiacal trigger for those who enjoy shopping. A few minutes onwards is the Jardim de Torel, a small, lovely park with a little café and view all the way to the Arch of the Rua Augusta and to the river Tejo. In the other direction, you can walk up to the Marques de Pombal square and visit the statue of the man who planned the reconstruction of Lisbon after the devastating earthquake of 1755.

Those seeking adventure beyond Lisbon's parameters should aim for the nearby palatial Sintra or beachtown of Cascais. To maximise on your time, it's best to rent a car through the hotel's car service.

Come departure, there's no need to rush your final breakfast at Torel Palace as Lisbon airport is just a 15-minute drive from the hotel.