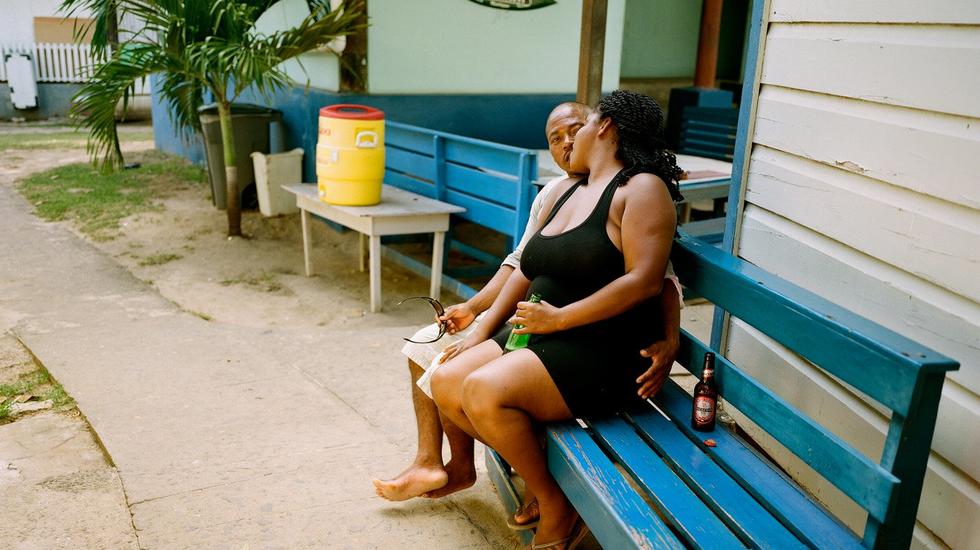 I travelled to Mustique with various pre-formed opinions and some not inconsiderable concern about the experience I would have there. Tabloids and magazines give the impression that the island is a beacon of luxury and privilege. Indeed, a celebratory book on the island and its transformation in the 1960s by old Etonian Colin Tennant (and the almost impossibly named Hugo Money-Coutts) declares in the first sentence that Mustique is "fantasy realized". The Duke and Duchess of Cambridge honeymooned there, Mick Jagger has a house, as does Bowie, and it is the frequent haunt of supermodels and entrepreneurs - in other words, the super-rich.

I struggled to get my head around the idea. "Think of it as a hotel, where each villa is a room," suggested one holidaymaker. I asked a Canadian expat who had been living and working on Mustique for 16 years what she felt about the entire island being a resort: "I wouldn't say that it's a resort; the same people come back, time and again, and you build relationships with them. It's more of a community". But the community she referred to was made up of people who owned mansions on the island and not the locals who were born and raised on the island and attended school there, who grow up to work almost exclusively as staff (butlers, housekeepers, cleaners, chefs) in the mansions of international tourists. I noted on my arrival that the villa in which I stayed had only UK plug sockets.

The prettiness of the houses in the local village is striking: pastel shades and picket fences, chairs and hammocks on open porches. I met with the Pecky, the owner of the only real bar for the 500 locals who live here year round, to talk about what happens outside of homes of the rich and famous. "There is so, so much more to Mustique. We have a good time here. The people that come and go don't phase us - they're just another person. It's not about their money or how famous they are. We just get on with things."

Towards the end of my trip, I met with Basil Charles, who runs the island's "only" bar - the only bar intended for holidaymakers, in any case. Basil - originally from St Vincent - was employed on Mustique as a bartender in 1971 by Tennant, and worked up to owning his own venue, eventually becoming famous on the island and among its visitors as their host. For someone so formative in the development of the island as it is now, I expected glowing praise. Indeed, when I asked what he thought made Mustique such an attraction, he emphatically called it "The safest place on God's earth." Children come and dance in his bar late at night and their parents don't have to worry. There is no crime, no theft.

Further into the conversation he became more damning: "The island is colonial. The indigenous people here have no rights... The Mustique Company want to make them comfortable so they don't complain, but really they have no choice over anything." He was referring to the company which owns the island, and is in turn owned by the island's many foreign home owners.

In this, and in many other ways, Mustique is a complete anachronism, and one wonders how a place so seemingly segregated can endure in the way that it does. Granted, the island and its tourism generate a great deal of money and employment opportunities for St Vincent and the Grenadines, and The Mustique Company donates something to the island every year: a community centre and a library are two recent examples. Fundraisers for the island's municipality and schooling are often held.

I was shocked when Basil told me that on Christmas and New Year locals are not allowed on the most popular beaches, as they are reserved for international homeowners. He referred to the local village as a "gated community" and the foreign homeowners as "vampires of vanity."

My aim was to make a visual record of the unreported side of the island, away from the well-worn spiel of moneyed fantasy. As Pecky had said, there is much more to Mustique than perfect air-conditioning and raked beaches. "You don't need money to have a good time anywhere," said one local I spoke with who works in a villa. "We try and make sure people who come and stay have a good time, but the truth is they don't always seem happy. What Mustique is for them is who's been invited where, what dinner's going on. But then you look around - it's beautiful here. It costs nothing to be grateful for where you are."

Great piles of conch shells line the seafront by the fisherman's village, the coral pink a rim against the turquoise sea, the sun glittering overhead. A barbecue sizzles with fresh tuna, steam rising outside the bright lights of the bar in the local village on a Saturday night. Soca music plays, and people get together and drink beer and rum, impervious to the social machinations of the expats. It is this Mustique - a Mustique quite different from the manicured hedges and celebrity hangouts reported in the press - that I have tried to document in these photographs.