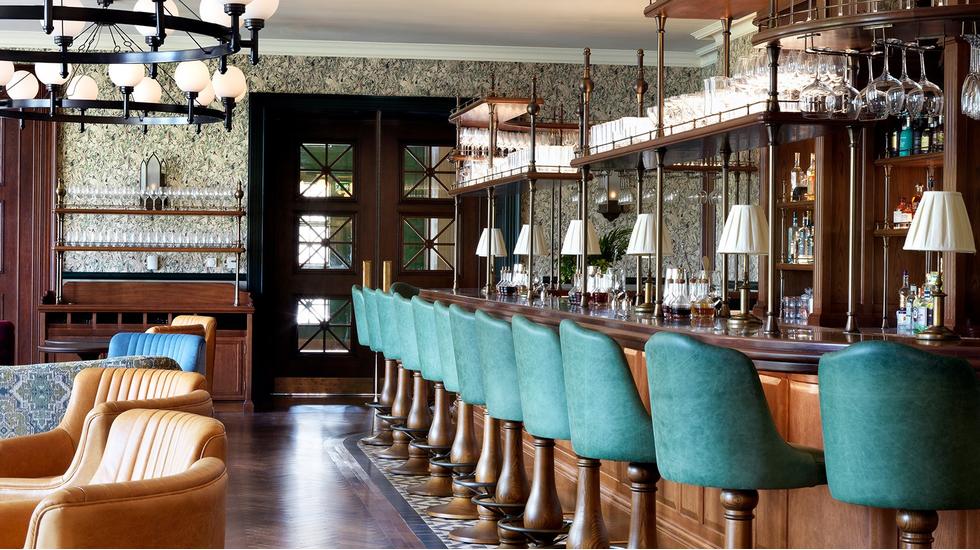 A former coaching inn spiked with English eccentricity, The University Arms is every bibliophile's bliss. Thumb through classics in the library, bed down in rooms named after famed alumni, or tuck into the restaurant's quintessentially British dishes. No Cambridge degree required.

This article appears in Volume 27: The Books Issue

"Have you been to Cambridge before?" the manager asks. "Oh yes! The last time was after my interview, when I cried into the river under the Mathematical Bridge because I knew I hadn't got in!" I reply brightly. To give him credit, he only looks bamboozled for a second before responding, "Well! I hope your stay with us will be MUCH more enjoyable."

Reader, it is. Despite immortalising the crest of my failed alma mater in stained glass, the University Arms is a bibliophile's bliss that you don't need a Cambridge degree to decipher. A former coaching inn that had morphed into a Frankenstein of architectural add-ons, last year it was licked into shape by architect John Simpson and interior designer Martin Brudnizki. The result is a bookish homage to the city's history spiked with English eccentricity - the carpets are patterned with university ties, the wallpaper is made of old tomes and there's a recording of Alan Bennett reading The Wind in the Willows in the loo.

Its 192 rooms include 12 suites named after alumni such as Newton, Byron and Tennyson. I snuggle up in Hawking, where a psychedelic print of the man himself oversees a covetable bookshelf curated by Mayfair bookshop Heywood Hill. In the library lounge you can thumb through classics by authors including Virginia Woolf, Alan Turing and William Wordsworth, and illustrated pocket maps highlight notable literary locations such as where Sylvia Plath and Ted Hughes first met, best reached on one of the hotel's vintage, powder-blue bicycles.

For nourishment I head to Parker's Tavern, the in-house restaurant dedicated to souped-up British classics. Chef Tristan Welch's dishes deserve their own volumes of rhapsodic prose, with special chapters on the slow-cooked truffled duck egg and rice-pudding soufflé. I'm sent packing with a slice of Duke of Cambridge tart that leaves me wiping away morsels of burnt sugar on the train home, those tears a dim and distant memory.