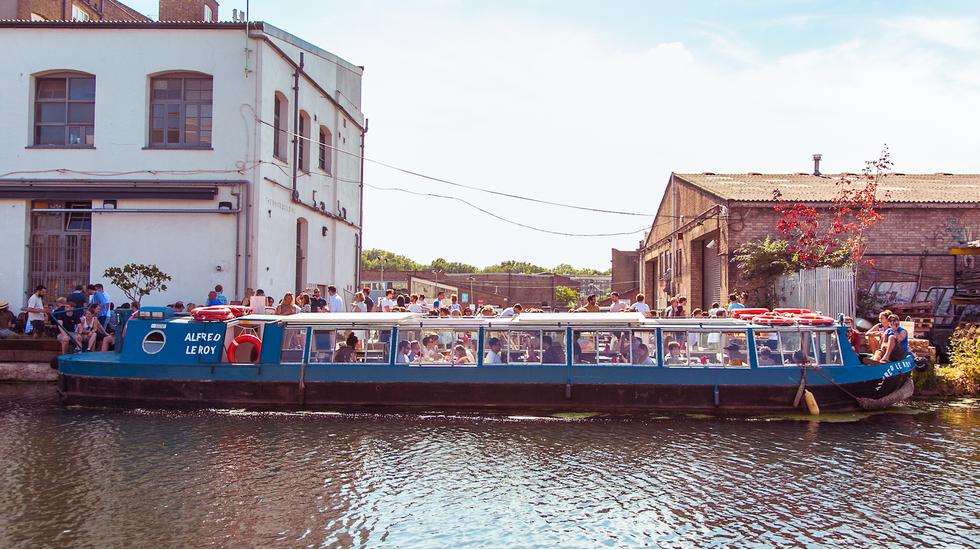 We've We've joined forces with clued up cool cats Urban Junkies to bring you an inside guide to the very best of London this summer. Parties, pop-ups, pumpkin sculptures and a floating bar in East London - if it's worth knowing about, it's here.

Sunday may not seem like the ideal festival day, but that's where Citadel comes in. This one-day festival in Victoria Park takes a more chilled approach to the experience, with readings, talks, theatre, plenty of food and drink and, of course, lots of live music. This year, Sigur Rós are headlining.

For the second May bank holiday, South London is set to represent with a fete for independent music, food and drink. GALA will bring together the very best of the South London scene: Kricket, Salon, Rum Kitchen, Brixton Brewery, Nightmares on Wax, Crazy P & Rayko are just some of the names gearing up to take over Brockwell Park. As for drinks, the Aperol Spritz bar will see you through from day to night.

After a £3m facelift, the legendary Jazz Café has reopened. New owners, the Columbo Group (the team behind XOYO, The Nest and Blues Kitchen), have sensitively restored the building which has seen the likes of Amy Winehouse, Adele, and Lee 'Scratch' Perry take to the stage. Expect electro, hip hop and jazz nights as well as a brand new 69-seat dining area on the mezzanine level, serving up chicken yakitori, brisket, bone marrow burgers and s'mores cakes.

If it's day partying you're after, it has got to be Love Brunch. A firm favourite on the sunlight rave scene, these guys know that a good time comes with food, music and plenty of booze. The collective has recently gone international, throwing parties from New York to Copenhagen. Of course, they've remained faithful to their home city, holding regular events on sky-high rooftops, in subterranean clubs and everywhere in between. Keep an eye on the website for news of their next party.

Anyone who's been to a gender-bending Sink the Pink club night knows the crack: glitter-drenched debauchery and dark corners for misbehaving. Now, the Sink the Pink team are throwing Savage parties every Friday and Saturday at the Metropolis: three floors of dirty disco dancing complete with poles, stages and tranny squads.

When: Friday and Saturday

Champagne and hot dog bar Bubbledogs are on the move in a mustard-yellow vintage 1976 Peugeot J7 van, serving up Champagne and hot dogs (two of our favourite things) to lucky punters. Tuck into oldies such as the New Yorker (grilled sauerkraut, caramelised onions), Sloppy Joe (beef chilli, cheddar cheese and chopped onions), or some new van-only dogs. Slurp on Champagne popsicles afterwards.

It's back! The original Street Feast, Dalston Yard, is set to return every Friday and Saturday with 16 traders, including Yum Bun, Bleecker Street Burger and B.O.B's Lobster. They've also got 13 bars to choose from - it doesn't get better than the tequila treehouse for slamming back ice-cold margaritas, tequila coladas and chilli picklebacks.

When: Friday and Saturday throughout summer

Want to sample some proper Louisiana fare? Pamela's on Kingsland Road is the real deal. The bar (owned by the same folks as The Alibi) has just given ever-popular roaming pop up, Decatur, a permanent home. Make your way through a feast of charred okra with ricotta and red pepper jelly, Kentucky-style beer cheese and gumbo with rabbit and crawfish étouffée. Oysters have their own dedicated section on the menu: go chargrilled with garlic pecorino butter or raw on the shell with cucumber and jalapeño vinaigrette.

When: Tuesday to Sunday

For a slice of La Dolce Vita via Haggerston, immerse yourself in this House of Peroni pop-up. Expect a series of events and experiences curated by Margherita Missoni, food by the acclaimed chef Francesco Mazzei (of L'Anima and Sartoria) and drinks by expert mixologist Simone Caporale (previously of The Artesian) - all fuelled by their love of Italy… and Peroni. The best bit? You can take a slice of Italy home as the on-site deli is well-stocked with the finest cured meats, cheeses, pasta and sauces.

Le Bao at the The Lido Café

Poolside dining in London - it happens, apparently. Head to the Brockwell's Art Deco lido and grab a table at The Lido Café, where Le Bao have taken up residency. Expect a modern take on traditional Taiwanese fluffy steamed gua bao buns, from spicy pork confit and Moroccan merguez to grilled cheese concoctions. Pre- and post-lunch dips in the pool are a must.

When: Thursday and Friday until 27 May

Alberto Giacometti and Yves Klein: In Search of the Absolute

One of the must-see exhibitions for this summer has got to be the Alberto Giacometti and Yves Klein exhibition, which pairs the divergent works of two conceptual artists born a generation apart. Giacometti was a master of sculptures and the material form, while Klein painted in pure saturated colour (Yves Klein Blue). What they do have in common? A critical awareness of the catastrophic effects of World War II and its effects on European culture, that's what. Compare and contrast how these artists expressed same reality in very different ways (and feel smug about how cultured you are).

"Your childhood fears will become your adult nightmares" at the immersive stage adaptation of R. L. Stine's spine-tingling Goosebumps, taking place underground in the Waterloo Vaults. This strictly adults-only show will take you on a journey through 17 rooms, each bringing the beloved horror classics to life. Expect everything from killer scarecrows and haunted masks to deranged scientists. Freak. Out.

When: Tuesday to Sunday until 5 June

Massimo Vitali at the Ronchini Gallery

For a serious dose of wanderlust or to plan your great summer escape, make tracks to contemporary photographer Massimo Vitali's show at the Ronchini Gallery. His sun-drenched, large-scale beach photographs are nothing if not a 101 in how to holiday.

The Slide at ArcelorMittal Orbit

The world's longest and tallest slide is wrapped around the Anish Kapoor's ArcelorMittal Orbit sculpture in the Queen Elizabeth Olympic Park and you'd be mad not to try it out. The 178m slide loops around the sculpture and observation tower, plummetting from a 76m viewpoint in a hair-raising 40 second descent to the ground. All in the name of art.

Re-immerse yourself in the colourful world of Yayoi Kusama, an exhibition of the iconic Japanese artist's work which is now open at the Victoria Miro galleries. On show will be a new take on Kusama's signature pumpkin sculptures, paintings from the artist's ongoing series My Eternal Soul and, most excitingly, there will be several mirror rooms (each created especially for the show).

For those who wish both float upon and imbibe liquids, make your way to Alfred Le Roy, the canal boat bar which is docked outside Crate Brewery for the summer months. Tipped as one of the coolest summer hangouts, sip on craft brews and kombucha cocktails while you get your Hackney-on-sea sea vibe going - don't forget your shades.

East Londoners rejoice: Dalston Roof Park has reopened for the summer season. A garden in the sky strung with hanging baskets, hops, grasses, climbers and creepers - this urban oasis is the place to while away your weekend. Food, booze and entertainment is taken care of via a brand new bar, food vendors (including Middle Eastern barbecue from from Tom's Feast) and DJs spinning out tunes from 3PM until 12AM.

The fourth floor of the Marriott Hotel Park Lane's rooftop is harbouring a secret which involves canned Negronis and Nikkei bites. Find your spot among reclaimed school science tables and rooftop swings before making your way through a menu of Japanese plates, including sashimi pizzas (yes, really), fried chicken and an Asian take on pulled beef tacos. See. You. There.

If you haven't yet made it to NT's (the bar from the team behind ever-popular Night Tales) at Netil House, there's now another reason to go: their summer terrace has been born. The sunset deck is kitted out with cosy booths and tropical foliage, with DJs bringing the party atmosphere alongside flamboyantly fruity piña coladas and flavoured margaritas. Food wise, it's all about the barbecue and, of course, Morty and Bob's legendary cheese toasties (known for their hangover-busting capabilities).

When it comes to cocktails, it doesn't get much better than at Sager + Wilde. This summer, they're upping their game and opening an outdoor Courtyard Bar. Expect all their signature tipples, plus some shack-only additions. If that doesn't tempt you, the new Lounge Bar on their mezzanine will with their innovative list of old fashioneds, featuring the likes of burnt coconut and olive oil.