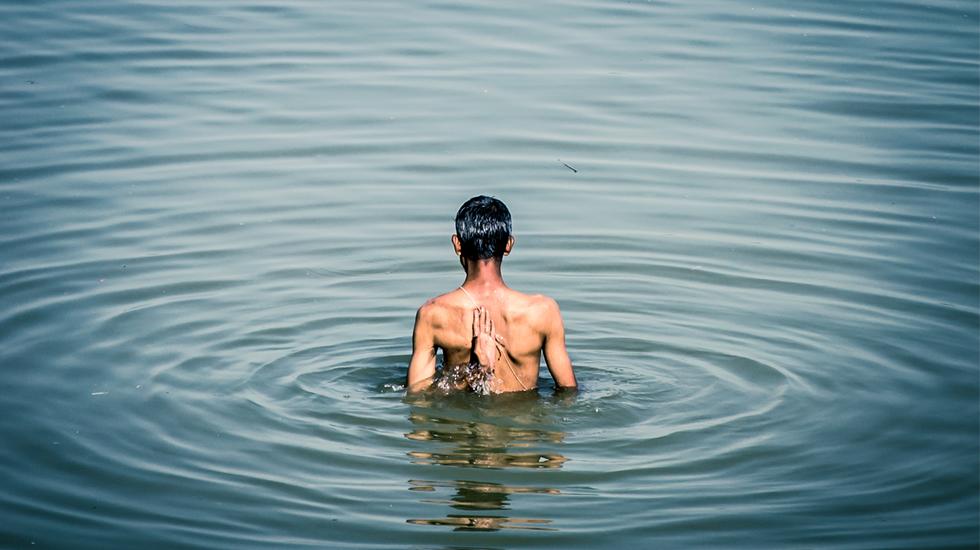 It It can be easy to forget, as you pick your way through the ash and crackling embers of Varanasi's cremation site, that this is in fact a place of celebration. From our boat moored on the Ganges in the fading golden-hour sun, the heaps of burning wood which scorch the air do at first seem morbid, even terrifying. And in Varanasi, the city at the heart of Hinduism, death is inescapable. From the piles of flaming tinder narrowly concealing burning corpses to the countless human remains at the bottom of the Ganges, mortality moves through the air as densely as the incense rising from the temples, or the heat of the September sun.

To visit this sacred city is to confront a reality that is so often pushed to the back of our minds in favour of more palatable thoughts. Yet here there is none of the bleak misery that goes hand in hand with bereavement across most of the world. Instead a family's mourning is channeled into joy that a loved one is beginning their journey to a better place. In the Hindu religion, to be cremated on Varanasi's Manikarnika or Harishchandra Ghat is a rite of passage; a one-way ticket to Nirvana without the process of reincarnation that the rest of us must tussle through. Sitting in a cracked lilac boat on the grey waters as the eternal flames of the cremation sites licked the sky, we learned from our friend Ballah that when a father dies his sons must shave their heads in respect. As you wander the bustling and sunny Ghats, this ritual is easy to spot; portly barbers hack away hair with rusty shaving knives, while bald men cut a striking figure, appearing like monks in white robes with their shiny, hairless skulls.

It is a privilege, Ballah tells us, to burn away in Varanasi. Only around 25,000 bodies are cremated on the Ghats each year. Perhaps that explains the strange air that fills the place, one of tranquil celebration. "It is beauty," says Ballah, "we come into this world alone, we die alone. We worry, we work, we cry and this is how we end; ash." I ask him if it scares him, to think of his own self vanishing into smog on the banks of the city he grew up in. "Scared? No! It is joyful, it is all I want." Try as we might to feel just as jaunty in the face of all this brazen death, we came to accept that this mindset, so unique to Hindus, was admirable but completely alien to us. Varanasi is a city that pulls you in and forces you to look death straight in the eye. Yet it is also a place of such life. Boats of pastel pink, green and blue bob on the waters, cows and goats painted orange stroll the banks of the river and music calls out from every corner of the city at all times. The Sadhus (holy men) decorate the steps with their painted faces, long beards and garlands of flowers, penetrating you with their heavy gaze. The Ganges itself is often referred to as 'Mother, Brother, Father, Son, Lover', and as people dive in, splash, sing and spin in its murky water, it is clear how much joy it brings to the city, and to those Hindus who have travelled here just to touch it.

Varanasi is not an easy place to visit. Stiflingly hot in the summer months, it can at times resemble a pressure cooker in which death, noise, religion, crowds and smoke are all ready to come bursting out in one long, defeating blare. Any place where your average day combines a morning yoga class and a wander around the market with a cremation sighting and a thousand-strong crowd chanting prayers to a snake god could not be called average. But like so much of India, once you let Varanasi wash over you in all its staggering glory, you can find yourself utterly seduced by it. It is a place where tradition hums and where history is tangible. Each day ends with Agni Pooja, the worship to fire. Watching from our boat what felt like the entire city sing along with five priests in praise of Lord Shiva (Great God), all of the festivity of India could be taken in at once. Varanasi encompasses the country's propensity to meld the sullen with the celebratory. Death and festivity are joined in this holy city. Candles burn, street food steam fuses with incense smoke, life melts away into the sky, and all seems just as it should be.

The cremation sites are places heady with atmosphere, but Indian women are not permitted to attend the burnings. The ceremony should be calm and include no tears, Ballah told us, and women have been responsible in the past for showing distress during the ritual. So we were startled when we were asked to walk through the burning bodies by families 'for luck'. This was because we were from the West, something which is still revered by many locals. We politely sidestepped this request.