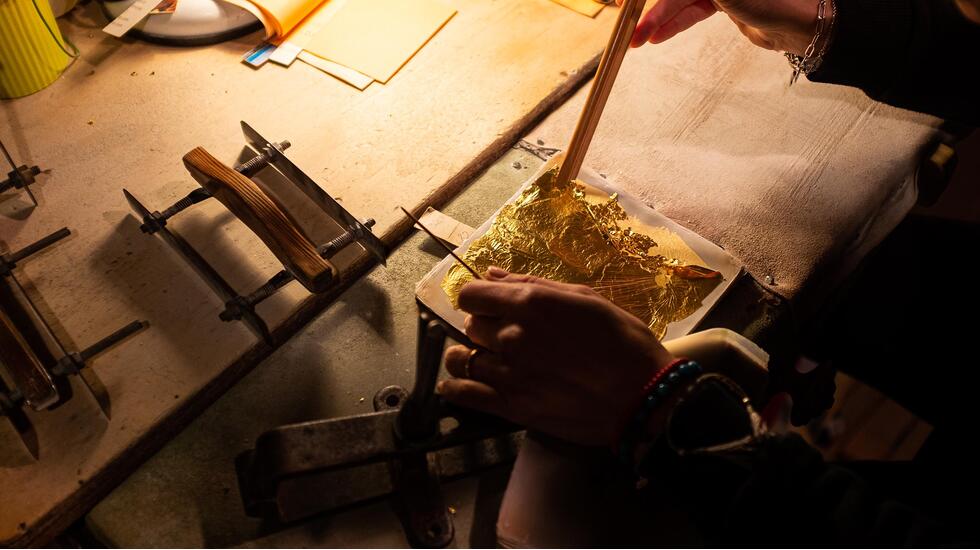 Gold Gold is almost as ubiquitous as water in Venice. It is seen in glittering traces on palazzo plasterwork, encrusting the interiors of St Mark's Basilica and glinting from gondolas and carnival masks. While the Ancient Egyptians were the first to work gold for ornamental purposes, the craft reached these shores via Byzantium in the 11th century and flourished during the days of the Most Serene Republic. By 1700, the city was home to some 340 artisan battilori (literally meaning "to beat gold"). But today, there is only one atelier in the entire lagoon - the whole of Italy, in fact - that's working gold the traditional way, by hand.

Mario Berta Battiloro is tucked within the walled gardens of a blink-and-you'll-miss-it residential building (fittingly, the former home of master artist Titian) in the Cannaregio district. Here, artisan goldbeater Marino Menegazzo turns 24-carat ingots into foil sheets 200 times finer than human hair. The metal is smelted, laminated into ribbons using an antique machine (dating from 1926, when the workshop was founded) and placed between layers of parchment, then wrapped in goatskin to form a palm-sized bundle.

Next, the beating begins. Menegazzo repeatedly pounds the parcel with an 8kg hammer. Working for two hours at a time, he can clock up 30,000 strokes per session and turn a single 1g ingot into 50 foils. "It's a contemplative activity, like a meditation," he says. Chatting away over the loud, rhythmic thump of the hammer, he doesn't even glance down to check the blows don't land on his bare fingers - he's been at this since 1975, having learned the art from his father-in-law.

Patterns come from the hammer strokes, and the weather, and my emotions; this gold has a soul

It's still a family affair, with Menegazzo's wife, Sabrina, and twin daughters, Eleonora and Sara, carrying out the next steps: cutting the ultra-thin foils into neat squares and sorting them into booklets. At lamp-lit desks, the three women handle the foils solely with bamboo tweezers called canini, their work as silent and delicate as the initial hammering is noisy and forceful.

As it stands, there's nobody to take over the craft of battiloro when Menegazzo retires. "Young people don't want to do this kind of tough, physical work; you have to learn from a master and be very patient," reflects the 68-year-old artisan. A handful of short-lived apprentices departed for alternative careers on the mainland, a symptom of Venice's wider problem with "brain drain".

Then, there's the influx of cheaper metallic alloys and industrially produced gold leaf from abroad. For Menegazzo, there's no comparison in quality: "In the light, our foils have veins, patterns that come from the hammer strokes, which vary every time. Even the weather and my emotions affect the result; for that reason, you can say this gold has a soul." Eleonora adds that industrial versions lack opacity: "They're almost see-through, so you have to apply many layers."

That's why expert restorers - along with mosaic artists and Murano glassmakers - favour Menegazzo's gold, which adorns the angel of St Mark's bell tower, the giant sphere atop Punta della Dogana and the Correr Museum's ornate doors. Further afield, it graces the basilica of Lourdes and Milan Cathedral.

To boost the relevance of battiloro, meanwhile, the Menegazzo sisters are spearheading less conventional collaborations, from the culinary to the cosmetic (including golden temporary tattoos and anti-ageing face masks). On nearby Mazzorbo island, Venissa Wine Resort gilds its bottles with the workshop's gold leaf, while Venetian designer Silvia Giani applies it to her lagoon-foraged shell jewellery. "New applications are vital," says Eleonora, "because we need to show our craft isn't only part of Venice's past, but also its future."