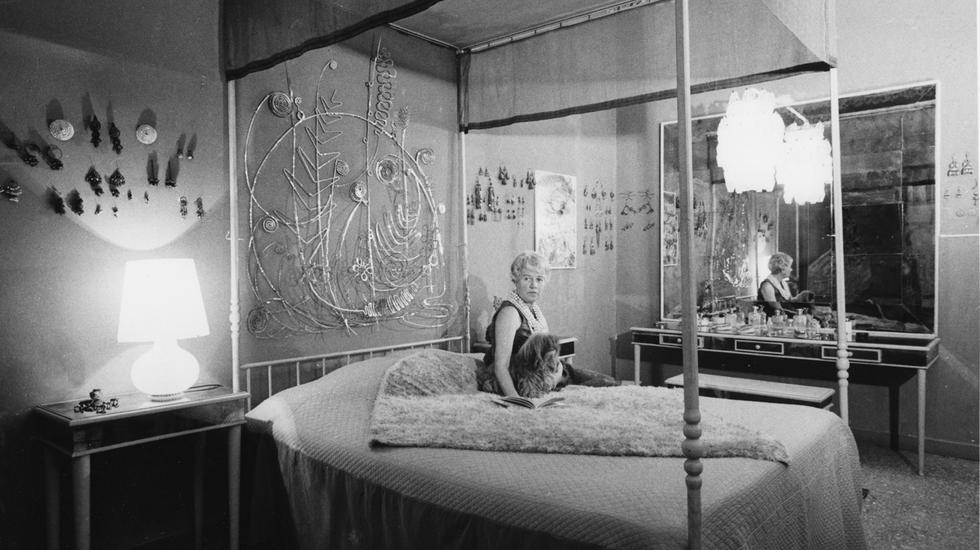 In the 'modern-Medici' world of 20th century art patronage and collecting, Peggy was a diamond in the rough. A woman to behold, with large bangle earrings designed by friends such as Miró, Calder and Yves Tanguy - all personal gifts of course - and a string of small Lhasa Apso dogs, it's easy to envisage her as a strange queen of the art world, sitting upon an Italian throne, shunning the New York scene for the ancient allure of Venezia. She worked fast with expert guides (Herbert Read was a famous friend and advisor) and in only a matter of years amassed a modern collection unlike any other.

The gallery itself is small and relatively modest in the world of Venice, where Piazza San Marco sits like a satisfied cat smothered in jewels and basking in the sunshine. Anyone who has visited St. Mark's Basilica will know that it reduces any former conceptions of glamour or glitz to mere trimmings - it's a jewellery box of churches, as ornate and adorned as it's possible for several walls to be. In contrast to this stunning display of wealth and opulence, Peggy's home sits rather quietly at the side of the Grand Canal, a long and surprisingly short white building rising up from the water with tufts of greenery sprouting here and there.

I decided Venice would be my future home. I had always loved it more than any place on earth and felt I would be happy alone there

Guggenheim's Venice home, the Palazzo Venier dei Leoni, designed by Lorenzo Boschetti, remains to this day - at least in the eyes of many Italians - palazzo incompiuto: the unfinished palace - and it's easy to see why. At only one floor high it's a smug little bungalow compared to its turreted neighbours. Although the palazzos are a long way off from the famous grattacielo 'sky grabbers', or as we rather dully call them skyscrapers, of modern society, they still tower rather impressively over Peggy's modest plot. However, as with St. Mark's, size is often deceptive, and hidden within this unfinished palace lies what reads like an art world's who's who of the 20th century.

After her father drowned on the Titanic in 1912 Peggy was left at the age of 14 with a fortune of $2.5million (in today's currency $34million) which she could not access until she turned 21 in 1919. Even with her new wealth she was unable to afford the masters of the Italian Renaissance that she loved, and instead had to settle for the modern masters emerging on the scene. It was in 1921 that Peggy finally made her way to Europe, and in particular, Paris.

She was intrepid; an adventurer of the art world, hunting and tracking down works like an archeologist might dig for gold. "I soon knew where every painting in Europe could be found," she wrote "and I managed to get there, even if I had to spend hours going to a little country town to see only one." She famously set herself the challenge to "buy a picture a day" and took to acquiring art, as she did lovers, at a ferocious rate, snapping up works by the likes of Dali, Picasso and Mondrian.

Peggy became connected to many artists in many ways, whether as a buyer, a lover (she married Max Ernst for a time) or simply an encouraging friend. Many of Jackson Pollock's paintings reveal inscriptions on their backs - 'To Peggy' or 'To my darling Peggy'. She had been one of the first to discover Pollock back when he was a humble carpenter in Solomon Guggenheim's museum. Peggy told him to paint and pushed him further than many others ever had, giving him his first exhibition in 1950 at the Museo Correr in Venice. Her final collection in Venice played a crucial part in renewing interest in postwar Italian art, along with resurrecting many of the Italian futurists. Reappraisals of artists such as Giorgio Morandi, Giuseppe Cpogrossi and Umeberto Boccioni can all be traced back to Peggy's unwavering support.

Although Peggy stayed on and off in Paris for 22 years, after World War II she discovered Italy and it was Venice that finally won her heart. In her memoir she remembers the decision to relocate clearly: "I decided Venice would be my future home. I had always loved it more than any place on earth and felt I would be happy alone there."

In 1948 her collection was exhibited at the Venice Biennale - and with her collection she brought with her a number of artists who had never been seen in Europe before: Pollock, Rothko and Arshile Gorky, among others. She was a leading contributor in a Biennale that would be remembered as - in Vittorio Carrain's words - "like opening a bottle of Champagne. It was the explosion of modern art after the Nazis had tried to kill it."

To live in Venice or even to visit it means that you fall in love with the city itself. There is nothing left over in your heart for anyone else.

"There is no normal life in Venice," Peggy Guggenheim declared in her autobiography Confessions of an Art Addict. "Here everything and everyone floats. Not only the gondolas, launches, barges, vaporettos, and sandalos but also the buildings and the people float. One floats in and out of restaurants, shops, cinemas, theatres, museums, churches and hotels. One floats luxuriously with such a sense of freedom." "Floatingness" - this was Peggy's chosen word for Venice - was the city's "essential feeling."

Despite this "floatingness" there are some things that remain wonderfully rooted, despite the water, in the stones of Venice. With all the buzz of the Biennale it's good to know there are some modern art fixtures in the city that are there the whole year round. Ironically, one of these very permanent fixtures remains to this day: the home-turned-gallery of Peggy Guggenheim, art world royalty and the niece of the Guggenheim Museum founder Solomon R. Guggenheim.

A year later she bought the Palazzo Venier dei Leoni on the Grand Canal, and held an exhibition of her sculptures in its gardens. Word soon spread of her collection as it toured Europe, stopping off in Florence and Milan before finally settling with its owner in Venice. In 1951, she opened her house and collection to the general public every summer and each year her offerings to her visitors grew and grew.

She was, and remains, a woman connected to the city - a woman who saw the greatness of such a world in which water ran through the streets, where water was the streets. She saw Italy for what it was and loved it for what it was - not a picture-postcard creation but a country as chaotic as it was beautiful. Although she died in 1979, Peggy remains in Venice. Even today if you look in a corner of the garden of the Palazzo you will find her rather ornate gravestone crowded with names: Peggy and her darlings. At first glance I thought they might be children; never failing to disappoint - in true diva style - instead I discovered the names were in fact those of her beloved pets, her 14 Lhasa Apso dogs, one after the other lovingly buried alongside their mistress.

In an essay in Michelangelo Muraro's 1962 Invitation to Venice, Peggy warned readers: "It is always assumed that Venice is the perfect place to honeymoon. This is a grave error. To live in Venice or even to visit it means that you fall in love with the city itself. There is nothing left over in your heart for anyone else."