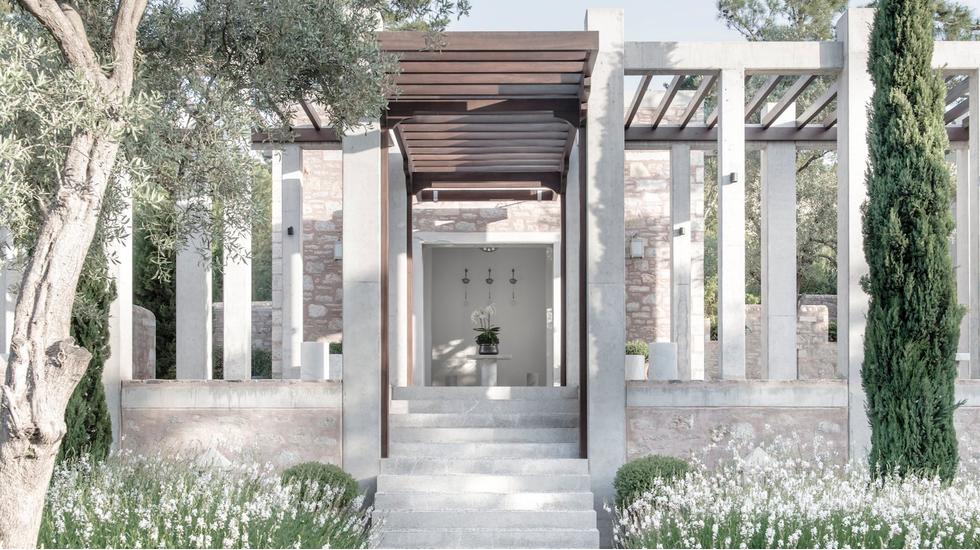 Aman Aman is one of the few hotel groups that frequent guests get fiercely competitive about, agitatedly asking one another: "How many have you stayed at?" before rushing off to book another stay at what is a once-in-a-lifetime experience for most. Such is the draw of this very unique anti-chain, that prides itself on meticulous design to ensure that every property blends seamlessly into its surroundings, either by beautifully repurposing what is already there or curating something so quietly brilliant that it disturbs neither landscape nor local community.

It's no different at Amanruya, their sprawling Turkish offering located just a 15-minute drive from the lively beach town of Bodrum (though it couldn't be further away in kind). Fanning along the coast in the blueprint of an ancient village, stone-paved paths, biscuit-hued villas, cool Antalya marble and leafy olive groves make it feel like a relic in itself - and one that we were more than happy to spend a few days revering. From the spiral-staircase threaded watchtower-cum-library down to the quiet pebble beach (via a glassy 50-metre infinity pool) a warm Aegean breeze engulfs the property, carrying with it hushed whispers of heady Turkish delights that stay with you long after your departure.

Reminiscent of a Roman emperor's palatial abode, each of the 36 private "pavilions" is surrounded by a pretty garden in which tinkling water features, herbaceous beds, shady terraces and sumptuous loungers gather around a (sizeable) pool. Defining the overused adage "an oasis of calm", step into cool rooms carved almost entirely from white marble softly flecked with grey. This includes the floor - you'll want to be barefoot throughout your stay - and the only thing that prevented us from lying on its cold hardness like some sort of sacrificial animal was the four-poster bed draped in fluttering linen. Freestanding bathtubs, rain showers, a double sink and top-of-the-range bath products go without saying, while the temptation to nick the impossibly soft bathrobe nearly proved too much.

This is Aman, no request is too small. Though it'd be short-sighted to miss out on a Turkish breakfast or "kashkaval", a medley of small plates including salty local cheeses, olives, eggs, fresh bread - look out for a sesame-seed scattered doughy circle known as "simit" - and homemade preserves. Don't miss the honeycomb made on-site, while gulps of strong, black Turkish tea make for a welcome change to your usual flat white.

There are four eating spaces throughout Amanruya - to call them "restaurants" seems a disservice - each with a focus on locally grown, organic produce; seafood is plucked straight from the Aegean while olive oil is pressed in nearby villages. Lunch should be taken at the beach club in the form of a mezze of octopus, dolmades, hummus and baba ganoush, while the gazpacho is simply divine. Come dinner, sit on low seats for a traditional Turkish affair, go fine-dining under the stars or get plates sent to your villa.

Several - though not of the loud, pumping variety. This is a place to order a G&T then stroll through the fragrant gardens sipping it as you go.

It doesn't get better than this.

You'll have to walk a while to leave the property, but ask the management to arrange a trip to the nearby village of Etrim, where residents make a living weaving beautiful Turkish carpets (at a fraction of the price you'll find elsewhere). Unlike many touristy excursions, you won't see a tour bus, selfie stick or tourist - it feels like a genuine snapshot of traditional Turkish life.