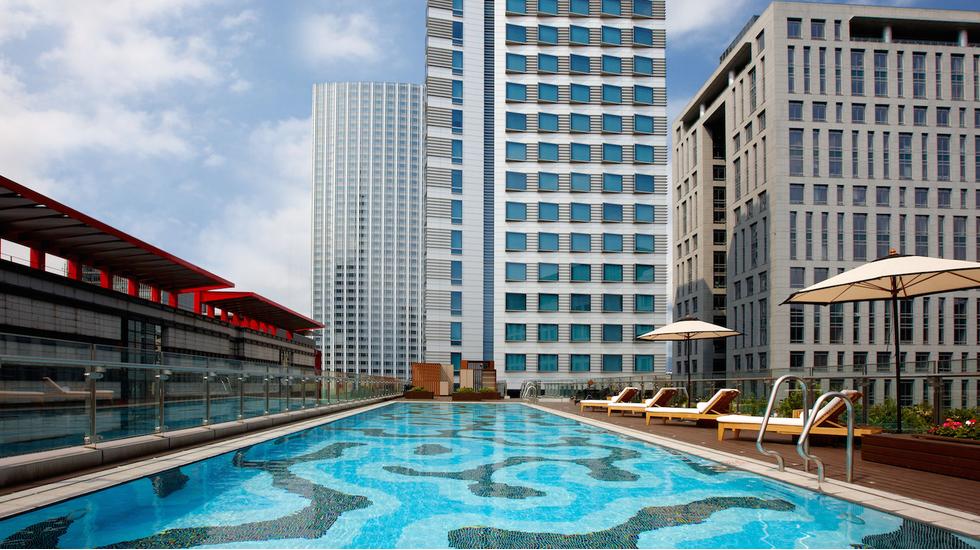 Humble Humble House offers respite in the middle of Taipei's bustling Xinyi district. It's perfect for travellers who want a location at the heart of the city, without being subjected to its madness. On first glance, Humble House's muted tones and understated luxury could lead you to believe that it's just your average business hotel - but further inspection will prove you wrong. (It is part of design hotels after all.)

The hotel's clean lines are in fact part of a minimalist Japanese philosophy, and the Taiwanese owners have dispersed their spectacular 600-strong collection of art throughout the property to encourage visitors to develop a deep emotional connection with it. The lobby features a suspended paper and light installation by London artist Paul Cocksedge and a video installation called The Day of Perpetual Night by Yang Yongliang makes you wish that they had taken longer to arrive. Their rooftop garden and pool is home to a number of interesting sculptures with a view of none other than Taipei 101. What's more, Humble House prides itself on its green accreditations from the Ministry of Interior of Taiwan, scoring a Diamond certification in Leadership in Energy and Environmental Design (LEED).

The 235 rooms design won't blow you away but they are comfortable and functional They are decorated in the hotel's signature earthy tones and are decently sized (the smallest weighs 26sq metres and the biggest 73sq metres). Each room features a Posturepedic mattress, free wifi and a singing and dancing TOTO toilet. Many of the rooms are also hypoallergenic - a bonus for those travellers who are always getting sick. Suites offer an additional butler service.

Breakfast is a buffet (aka feast) in the hotel's main restaurant with a selection of fresh smoothies and juices on offer.

Lunch, dinner and tea ceremonies can all be spent at the Italian restaurant La Farfalla. Here you'll find dishes like crab and tomato risotto, smoked chicken with fennel and cucumber and smoked duck salad. Apparently more than 3,000 bottles of premium alcohol are stored in their cellar...

Yes, in fact there are two. There is a small bar next to the restaurant on the ground floor of the hotel but the sixth-floor garden and Terrace Lounge is the more enticing option for cocktails.

If you're used to small boutique hotels, you should know this isn't exactly 'humble'; it's still a large hotel with a business aesthetic. The vibe however, is much more calm and zen than other popular hotels in the city, like the W. It is also practical, located only a 40-minute drive from Taoyuan International and 15 minutes from domestic Songshan (to Asian neighbours).

Within a short walk you can find...

Taipei 101 - Taipei's most famous landmark, which until last year was the tallest building in the world. Frank - Xinyi and its neighbouring districts also play host to the city's best nightlife. In warmer months head to Frank's, one of the city's only rooftop bars, for a spectacular view and beautiful crowd.

MRT station Taipei City Hall - Jump on the underground and it's only a couple of stops to the centre of downtown (get off at Zhongxiao Fuxing or Zhongxiao Dunhua).

Eslite - A giant and aesthetically pleasing mall with one of the best bookstores in the city, featuring magazines, graphic novels and more. This hotel is a member of Design Hotels. Rooms from £306.