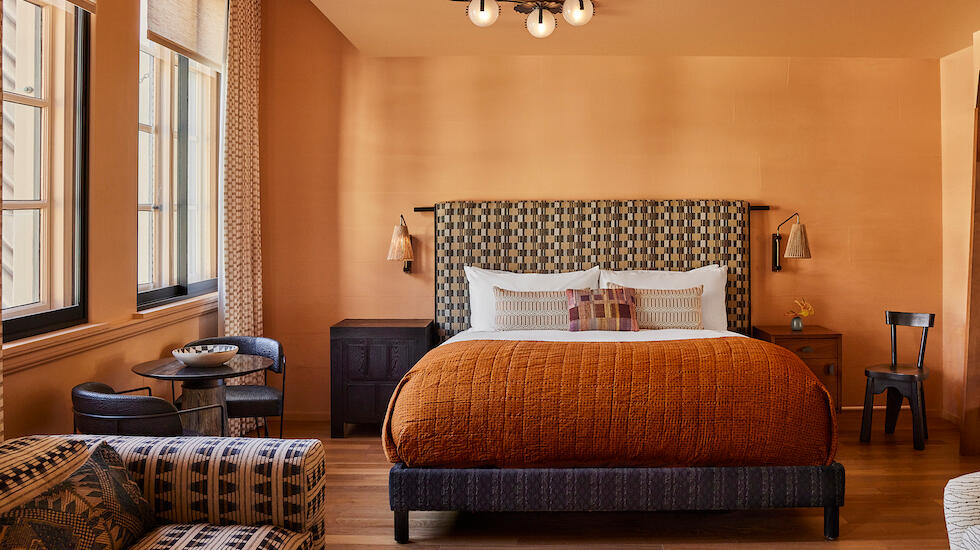 Downtown Downtown LA is on the up. Eyeballing the success of what the California city's east coast rival did to Brooklyn, the neighbourhood has seen huge investment over the last 10 years - and its impact is starting to show. Cue, the cool kids of the hotel trade pitching up along its sidewalks. First it was The Hoxton, then came Proper Hospitality, the design-forward group that has stormed California's cities (and beyond) with its distinctive Spanish Colonial Revival style.

We're not complaining. Founded with the mission to offer a home to the world's creative nomads, Proper sits right up our street. Loose luxury, Instagram-friendly and with the possibility of meeting someone interesting in the lift - what more could we want? As it turns out, we were waiting for a fresh, new location.

The hotel reception, left, and artwork from local creatives. | Photo credit: The Ingalls

Enter, the Downtown L.A. Proper Hotel. Situated on the corner of Broadway and 11th Street, the hotel welcomes guests with an insane pink mural by LA-based painter Abel Macias spanning the entire length of the lobby, framed by two pop art-perfect cacti. Elsewhere, the vibe is very much that of a Spanish-inspired second home in Los Cabos - think olive and lemon trees, checkerboard tiling, Mexican-influenced linens and lashings of teak. There's fearless use of colour across the board - the work of our ultimate interiors crush, Kelly Wearstler. The design guru - who, having worked with clients including Gwen Stefani, Cameron Diaz and Stacey Snider, is a bona fide real deal in Hollywood's golden circles - channelled Mexican modernism throughout, with motifs drawn from Portugal, Spain and North Africa, too.

Local talent has been put to use throughout. That striking black-clay reception desk? It's the work of LA ceramicist Morgan Peck. The crazy murals in the - supercool - pool suite? Expertly created by another city artist, Ben Medansky. It all combines to create a warm, welcoming and distinctively Californian feeling.

The 148 rooms could be straight from Kim K's Hidden Hills manor - all Skims-approved neutrals with handwoven fabrics throughout. Furniture is dark and Spanish-influenced, while walls are splashed in tones that tally with Nars blusher colours. Think Illicit pale orange and Sex Appeal peachy pink.

Most have great views (but for something special, head up to the roof). Our Deluxe King View was a good size, with a two-seater sofa for lounging, desk and coffee table (which we found laden with brownies, fudge, fruit and macaroons upon arrival). Every room has a TV, too.

We loved the soft-glow lighting in the bathrooms - flattering enough to snap an updated LinkedIn headshot in - and the vast showers - big enough to hold a board meeting in - felt indulgent in the mornings. Plenty of Aesop's travel-sized toiletries accidentally found their way into our carry-on, too. Scents of fresh, fruity geranium leaf? Not us, officer.

The à la carte menu has all the usual suspects - avo on toast and eggs any way you like - with a distinct Latin flavour evident in plenty of plates. In the name of balance (and following our jet-lagged decision to take a 3am run), we opted for pecan, maple syrup and bacon pancakes. Reader, they did the job: thick, fluffy and smothered in the sweet stuff, with crunchy, nutty bites sprinkled on top.

There are two restaurants on site, helmed by the James Beard Foundation Award-winning Suzanne Goin and Caroline Styne. On the ground floor, Caldo Verde offers an exploration of Hispanic-influenced cuisine in a plant-pot-crowded dining room. We went for a power lunch of yellow-tomato gazpacho followed by a crisp Portuguese chopped salad (just £23 for two courses), but had serious envy over the girls next to us tucking into their third tequila and grapefruit tonic.

Upstairs on the roof, beneath the iridescent spires of DTLA's skyline, take a seat beside all-day bar and restaurant Cara Cara's fire pit to tuck into Angelenos' favourite bites. Tacos, albacore sandwiches and wood-fired pizzas are all on the menu, as is a sizzling passion fruit caipirinha cocktail, made with El Silencio mezcal, cachaça and the sunshine-infused tropical fruit.

Yes, at rooftop Cara Cara. There's also an intimate speakeasy in the works, called Dalia, which gives us a reason for a second visit this year.

There's a small, 24-hour gym that's perfect for jet-lag-induced midnight workouts, although we'd argue a better use of the twilight hours would be hanging out by the rooftop pool come 3am to watch the sunset. Turn left, and you can see LA's infamous light glow bouncing off slick skyscrapers. Turn right, and the hills behind the city fill your vision, kissed with a coral glow.

Nothing pioneering, but they have made a start. Water in rooms is boxed, rather than in plastic bottles.

There's a lift to all floors, and some rooms are purpose-built for accessibility.

This is a crashpad made for multi-hyphenate millennials (and we mean the true generation - late 30s, at the least). Expect to overhear unicorn deals on women-led retail businesses being made in the restaurants - and gossip on founder downfalls by the pool.

The art scene in the area is on the up. You'll find The Geffen Contemporary at MOCA around the corner, and the Hauser & Wirth gallery space is just a quick drive away, in the neighbouring Arts District. Book onto a graffiti tour to take in the street-art scene.

Within a short walk I can find….

It's not quite Brooklyn yet, but DTLA is nipping at the east coast neighbourhood's heels, with restaurants, food stalls, a design district and upstart galleries populating the blocks surrounding the hotel. Unusually for LA, it's pretty walkable. With an offering this good, we imagine some might even be tempted to ditch their 90210 zip code.