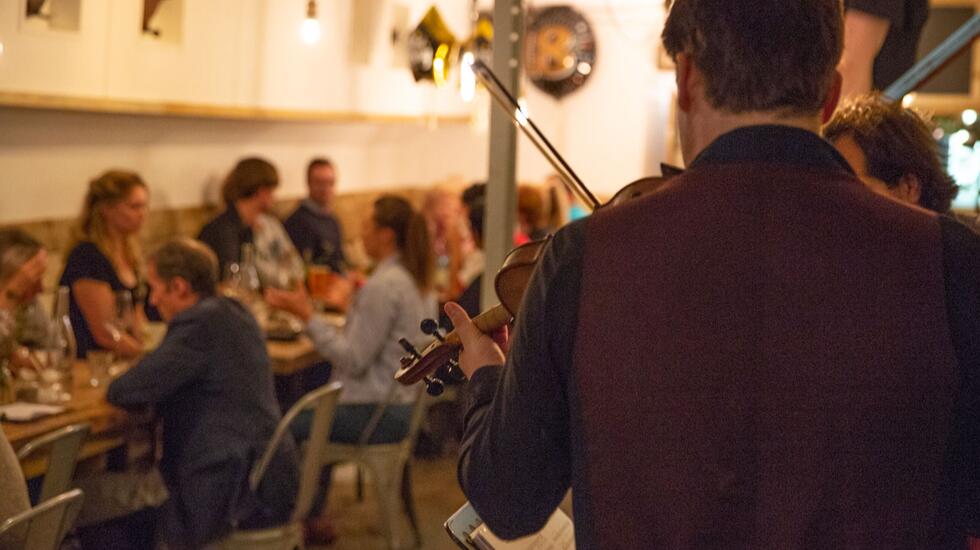 The The Hogmanay hangovers but a distant memory, 25 January sees Scots all over the world raising a glass to poet, lyricist and raconteur Robert Burns, who was born in the Ayrshire village of Alloway on this day in 1759. Following the maverick wordsmith's death in 1796, his friends got together to throw a supper in his honour, complete with toasts, bagpipes and whisky, and the tradition has stuck. While most of us will have sung along (perhaps while dancing shambolically) to Auld Lang Syne, fewer are aware of the influence the writer had on his homeland and beyond. Through collecting folk songs, revising and adapting them, Burns helped to preserve a rich cultural heritage, while his political and civil polemics have made him a hero of the people to this day.

Whether your interest lies in exploring poems such as To a Louse, A Red, Red Rose and Tam o'Shanter, or stretches only as far as trying a deep-fried Mars Bar for the first time, we've rounded up five places to go for a taste of Caledonia this Burns Night.

Travel - in spirit, anyway - to the Scottish Highlands on Hackney Wick's award-winning restaurant aboard a 120-year-old barge. The four-course menu begins with Scottish langoustines and oatcakes, followed by "neep-a-leekie" soup ("neep" being Scots for turnip, and what kids north of the border had to substitute for pumpkins at Halloween until the late-80s). Following a break for a dram or two of whisky - Copper Box's smokey, oaky Glasgow Blend - the feasting continues with braised mutton pie and then, after a toast to the "chieftain o' the puddin-race", haggis, neeps and tatties. To finish (you off), there's cranachan ice cream with tablet, and deep-fried Mars Bar. No room left for Scotland's dirtiest dessert? Take yours home in your sporran.

Now in its new home on Charlotte Street, culinary collective Carousel has gathered four leading Scottish chefs to whip up a gastronomic homage to Rabbie Burns. Representing Edinburgh's Heron, Ullapool's The Dipping Lugger and Glasgow's Epicures, the contemporary menu will showcase the best of Scotland's natural larder, with highlights including Orkney scallops, Jerusalem artichoke tart, and roe deer and haggis, paired with The Botanist gin-based cocktails, Bruichladdich whisky and a programme of poetry. If you like what you see in the White Room, check out Carousel's calendar of bookable experiences, which include wine tastings, cookery masterclasses and food photography workshops.

Looking to keep it traditional this 25 January? Make a beeline for Boisdale of Belgravia, one of London's only dedicated Scottish restaurants, where diners can expect a line-up of live music acts (including pipers), whisky from Annandale Distillery and a selection of menus featuring the likes of oak-smoked salmon, wild venison and dry-aged beef. The showstopper, though, will be the ceremonial Dumfriesshire Blackface haggis, made in the heart of Burns country. While the Scots still tell tourists the haggis is a small furry creature that roams its hills and glens, it's actually a savoury pudding containing sheep or calf offal, minced with onion, oatmeal, suet, spices and stock, historically cooked encased in the animal's stomach, though now manmade casing is often used instead. Vegetarian options are available.

Honouring Scotland's most famous wordsmith with a toastie might be a less-orthodox way to celebrate the Scottish poet's birthday, but no less delicious for it. We'll be popping into Deeney's Leyton High Road branch to gorge on the same kind of delicacies - including the signature Hamish Macbeth haggis toastie - that have made its weekly Saturday Broadway Market stall such a hit. Can't get there in person? Order a Deeney's Burns Night meal kit and make it a DIY hootenanny to remember. The box comes complete with everything you need for a three-course supper, plus full instructions, and also gives you access to a live-stream address to the haggis. Or, if you happen to find yourself in Tokyo on Burns Night, you can now visit Deeney's Japanese outpost, located in Jingumae, near the Olympic Stadium.

Fresh from a major revamp, this west London pub has been reimagined as a restaurant, cocktail and whisky bar, bringing - in collaboration with The Craigellachie Hotel - the essence of Speyside to the capital year-round. Think forest-green velvet banquettes, exposed-brick walls and mounted stag heads framed by a froth of foliage. Kilt-wearing is particularly encouraged on Burns Night, when there'll be live music, whisky galore and the traditional toast to the haggis. Alternatively, go à la carte for comfort-food dishes that include crispy monkfish tacos, a lobster, crab and shrimp burger, and fish and chips with minted pea purée. Prefer your whisky in a cocktail? Try the copper spaniel, a warming blend of Copper Dog, Craigellachie 13, ginger, honey and lemon.